Everything you need to know about 13th month pay

CHRISTMAS season is when people are abuzz with what gift items to buy, parties to attend, food to prepare, among others. But one thing that individuals, especially employees, are very excited about is how much 13th month pay will they get.

Here's a infographic showing a formula on how much extra pay will you receive: 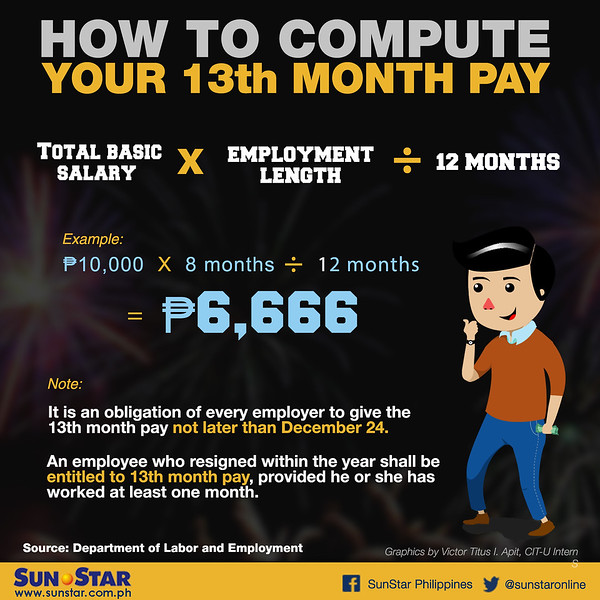 Thirteen-month pay is a form of monetary benefit given to every rank-and-file employee.

The Department of Labor and Employment (Dole) said that every rank-and-file employee in the private sector has the right to receive 13th month pay, provided they worked for at least one month in a year.

The Dole said that it is an obligation of every employer to give the extra pay not later than December 24.

The Labor Code, as amended, distinguishes a rank-and-file employee from a managerial employee.

"A managerial employee is one who is vested with powers to lay down and execute management policies and/or to hire, transfer, suspend, lay-off, recall, discharge, assign or discipline employees, or to effectively recommend such managerial actions. All employees not falling within this definition are considered rank-and file employees," the Dole said.

In some cases, according to Philippine Labor Laws, a rank-and-file employee with multiple employers is also entitled to 13th month pay; thus, if an employee works in the government and at the same time works part time in a private enterprise, he or she shall receive the benefit from the private company.

Moreover, an employee who resigned within the year shall be entitled to 13th month pay, provided he or she has worked at least one month.

The payment may be demanded by the employee upon the separation, and the formula is still the same.

Aside from the 13th month pay, employees get the so-called "Christmas bonus," but it is the employers' initiative to give such as a way of thanking the workers for their service to the company.

The 13th month pay is considered a bonus mandated by law, while Christmas bonus is voluntary, depending on the productivity and practices of the company.

Christmas bonus may be given in a form of gift certificates, canned goods, and monetary, among others, making it non-taxable.

The 13th month pay, however, as stated in the Republic Act 10653, is not subject to tax, only when the “gross benefits received by officials and employees of public and private entities shall not exceed P82,000.”

Every employer is required to make a report of compliance with the law to the nearest Dole regional office not later than January 15 of each year.

Employer's failure to pay the 13th month benefit is liable to administrative cases that may be filed by aggrieved employees to any labor department offices.

This monetary benefit is in pursuant to Presidential Decree (PD) 851 signed by former President Ferdinand Marcos on December 16, 1975.

Originally, when PD 851 was issued, only employees receiving a basic salary of not more than P1,000 a month were entitled to 13th pay. But when President Corazon Aquino took post, she amended Memorandum Order 28, which entitled all employees to receive the benefit, regardless of whether they are earning less than or higher than P1,000.

The sole purpose of 13th month pay, according to PD 851, is “so working masses can properly celebrate Christmas and New Year” and an opportunity for them to save or invest.

employment 13th month pay Christmas Bonus FYI
View Comments
Disclaimer
SunStar website welcomes friendly debate, but comments posted on this site do not necessarily reflect the views of the SunStar management and its affiliates. SunStar reserves the right to delete, reproduce, or modify comments posted here without notice. Posts that are inappropriate will automatically be deleted.
Forum Rules
Do not use obscenity. Some words have been banned. Stick to the topic. Do not veer away from the discussion. Be coherent. Do not shout or use CAPITAL LETTERS!
Trending