AT LEAST six people were injured when portions of the ceiling of Cinema 5 at the new annex of the Ayala Center Cebu in Cebu City collapsed at 8:50 p.m. yesterday (Monday).

Dreamscape Networks, a business process outsourcing company, rented the whole Cinema 5 for the launch of its new ad campaign. Several foreign visitors, apart from its more than 300 employees, were among those at the event.

A video posted on Facebook by restaurateur and Sun.Star Weekend columnist Alexis Yap showed the moviegoers leaving the cinema in a calm and orderly fashion, while water poured from a portion of the ceiling. Then, portions of the ceiling collapsed.

"They were rushed to a nearby private hospital," Japzon said in a phone interview.

"Part of the ceiling that fell at Cinema 5 was the 'acoustic' ceiling. We are yet to investigate the cause of the incident. As of the moment, our priority is to ensure the safety of those who were present," she said.

Japzon also said they are looking into what caused the ceiling to collapse. 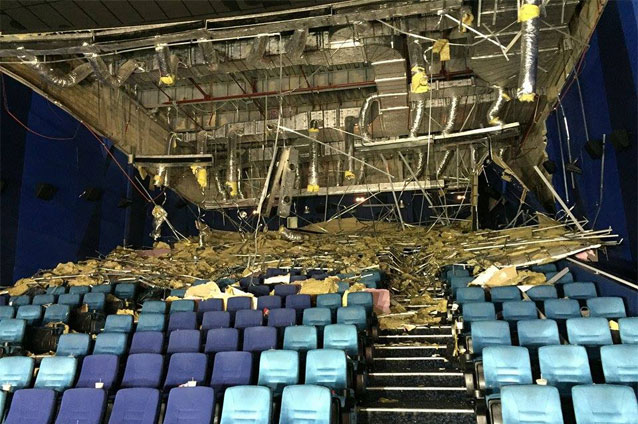 AFTERMATH. This is how Cinema 5 looked like after its ceiling collapsed. (Contributed photo)

PO1 Rayme Veraque of Cebu City Police Station 4 in Barangay Mabolo told Sun.Star Cebu that if not for a media worker who informed them of the incident at 9:10 p.m., the police would not have known about the accident.

A few minutes after the incident, some of the employees went home, he added.

"Dugay kaayo mi nakasulod. Medyo nalangay gayud kay kahinanglan pa og clearance. (It took us a while before we were granted entry. We needed clearance from the management)," Tumulak said.

Tumulak said the water that poured out of the ceiling was accumulated from the air conditioning system of the mall.

He also said that the Cebu City Disaster Risk Reduction Management Council (CCDRRMC) will ask the Office of the Building Official (OBO) to investigate the matter because there might be lapses in the mall's maintenance engineering.

Based on their initial assessment, Tumulak said it was not just a usual problem of the pipe connection that's why OBO's intervention is needed.

Tumulak added that the Cebu City Government will send a team to coordinate with the management of Ayala Center Cebu to inspect the air conditioning system and the structural design of the establishment.

In answer to the statement of Dreamscape Networks chief executive officer Mark Evans about the Ayala management's 25-minute delay in its response to the emergency, Japzon said there were security officers who responded but they were no longer in uniform. Evans reportedly will file a lawsuit against the management.

Videos of the incident circulated on social media. (Sunnex with RVC & DTJ)