MANILA -- One in every 10 Filipinos aged 6 to 24 years is an out of school child and youth, a survey of the Philippine Statistics Authority showed.

The 2016 Annual Poverty Indicators Survey (Apis) showed the country has about 3.8 million out-of-school children and youth or about 10 percent of the 39 million Filipinos with age range six to 24 years old.

Apis is a nationwide survey that presents data on the socioeconomic profile of Filipino families, and other information that relates to their living conditions. It is designed to provide inputs to the development of an integrated poverty indicator and monitoring system in the country. It covered around 11,000 sample households.

The proportion of out-of-school children and youth was higher among females than males, according to Apis. 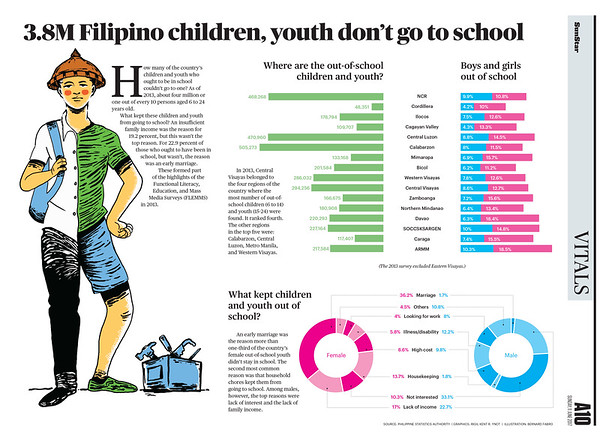 According to Apis, the most common reasons among OSCYs for not attending school were marriage or family matters (42.3 percent), high cost of education or financial concerns (20.2 percent), and lack of personal interest (19.7 percent).

Among females, marriage or family matters were the main reason for not attending school with 59.3 percent; while it was the lack of personal interest among males with 36.5 percen0t.

Nationwide, about 53 percent of OSCYs belong to families whose income fall at the bottom 30 percent based on their per capita income. (PNA)