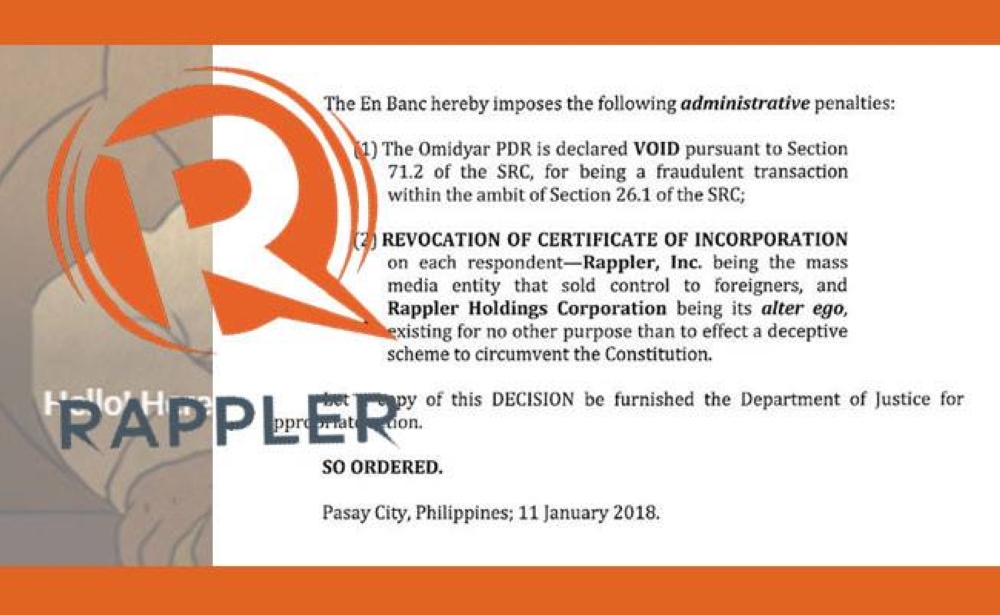 THE Securities and Exchange Commission (SEC) en banc has effectively ordered the closure of news website Rappler by revoking its registration.

As administrative penalty, the commission revoked the Certificate of Incorporation of both Rappler and Rappler Holdings. The commission also declared void the Philippine Depositary Receipts (PDRs) issued to Omidyar "for being a fraudulent transaction."

In a statement, Rappler said it will "not only contest this through all legal processes available to us, but also to fight for our freedom to do journalism."

The SEC said a special panel that it created in July 2017 to conduct an in-depth investigation of Rappler found that the news website is being funded and controlled by eBay founder and entrepreneur Pierre Omidyar.

Rappler, however, denied the SEC’s claim.

"Philippine Depositary Receipts (PDRs) do not indicate ownership. This means our foreign investors, Omidyar Network and North Base Media, do not own Rappler," said Rappler.

"They invest, but they don't own. Rappler remains 100-percent Filipino-owned," it added.

Rappler Holdings, which owns 98.84 percent of Rappler, issued in 2015 a total of nearly 20 million PDRs to Omidyar Network and NBM Rappler, both foreign entities. NBM Rappler is co-founded by North Base Media.

Under the Foreign Investments Act, mass media should be 100-percent Filipino-owned.

Presidential Spokesperson Harry Roque Jr. said in a statement that Malacañang respects the decision of the SEC. He said the SEC has the authority to determine whether Rappler is legible or not to secure registration from the commission.