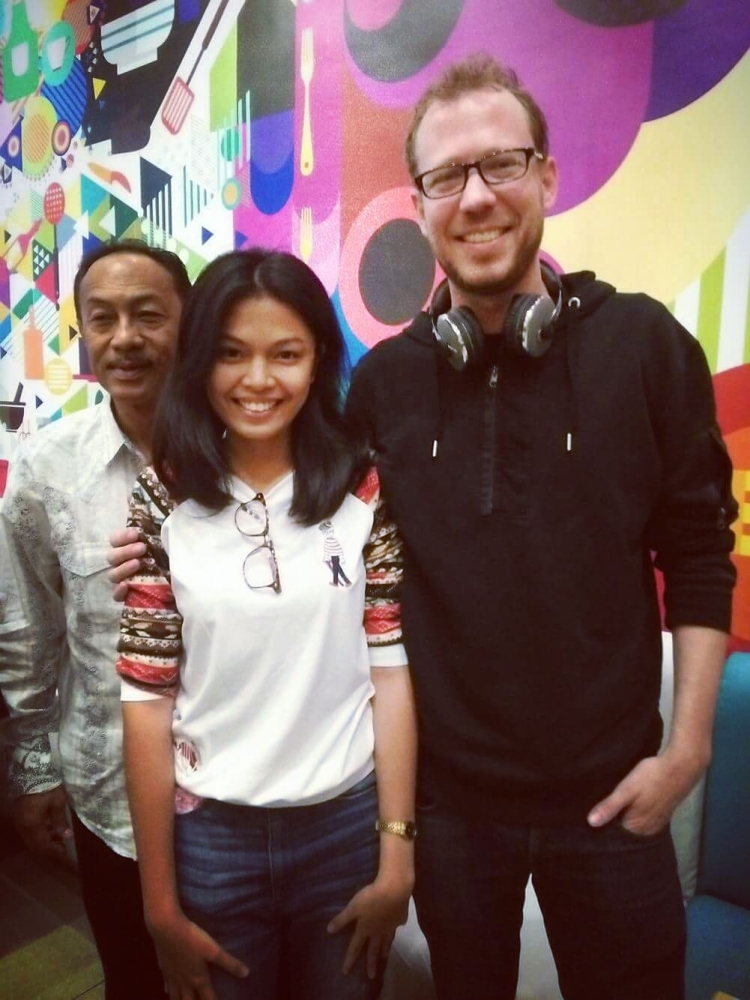 Growing up, the song became familiarly beautiful that it's one of the first songs I key in during videoke sessions with friends. I even sing the second voice, imagine! The song for me then was beautiful, calm, subtle -- butterflies in stomach.

And so fast forward to 15 years after, Stephen Speaks is in Davao City for the last leg of their "Alive to Fight" tour. Rockwell Ripperger, the vocalist of Stephen Speaks, shared how this entire Philippine tour was just an accident but he considers the best accident he ever experienced.

Several months ago, their sax player Paul Chatman moved to the Philippines. Rockwell wanted to visit his friend. When they were finally together in Manila, Rockwell said they were looking for a good music store in the city to buy a keyboard set. Unfortunately (or perhaps fortunately), their quick Google search of the address didn't bring them to the nearest JB Music branch. Instead, it brought them to the JB Music head office.

They were greeted by a receptionist instead of a music store attendant. They introduced themselves to the receptionist who was as confused as they were. "Stephen Speaks as in the Passenger's Seat Stephen Speaks?" The receptionist was starstruck. She called their Chief Operating Officer Jerico Fernando and that's just when the offer to tour nationwide commenced.

They had been to Manila and Cagayan de Oro, among other cities, before they ended the tour with Davao City. During his performance on stage of the SM City Davao Annex activity center on February 26, Rockwell shared how this "accident" is the best accident ever.

One of the many things that make him want to be in the Philippines and sing for the Filipinos are the brave soldiers during the Marawi siege. He was amazed of the bravery of these uniformed men and said that he does not know their entire story but he is sure of the many friends they lost. And yet they continue to fight to serve the country. With that, Rockwell said he honors the bravery of the Filipino soldiers. He dedicates their songs "Alive to Fight" and "Walk On."

He said he would one day want to visit Marawi and sing for these soldiers if only that's how he can honor them. Rockwell had been through a chapter in his life that he hit rock-bottom especially with matters involving his family. After realizing what needs to be done, he decided to fix things and that was when he started writing "Alive to Fight" which he also hopes the Marawi soldiers can relate to.

Now, they are finishing recording an album. They target to finish by August of this year. With the hundreds and hundreds of Dabawenyos singing along with their Out of My League and Passenger's Seat among many other songs during their performance at SM City Davao, Rockwell said he would be very glad to come back in September to officially promote their album.

Stephen Speaks is not the name of the vocalist or anyone from the group. Stephen is one of the deacons in the Bible who was considered the first martyr and who lived during the early church era in Jerusalem. He was the one accused of blasphemy by Jewish authorities because of his teachings. He was stoned to death because of this.

The group Stephen Speaks took inspiration from this godly act of still speaking and preaching despite the fact that a lot of people do not believe in him - and worse even in the end he was stoned to death.

"Do you consider yourself religious," Rockwell was asked.

Fifteen years earlier, their famous Passenger's Seat might just have sparked one of the first hidden dreamy moments for the listeners.

Perhaps 15 years after, we were finally on the passenger's seat laughing with the person seated on the driver's seat while the streetlights lingered on our eyes for a millisecond.

However, fifteen years might have also made us realize that the overwhelming feeling we call love and admiration might not always be for the person on the driver's seat close to us -- but also for the brave people who fight for peace and for everyone to have a good night sleep or for people who stand up for what they believe to be true even when it means risking a lot. Or maybe this love is for ourselves - for our soul.

The 15 years might just have stretched our understanding of love.