A boost for small banana farmers 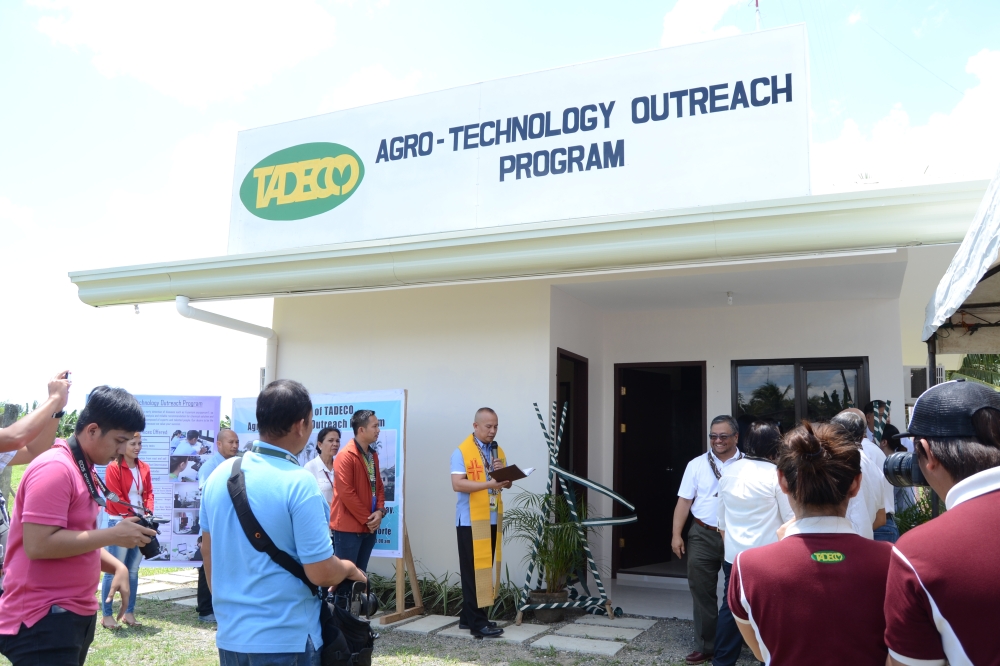 IMPROVEMENT in research and development -- this is among the things that is continuously being pushed in the banana sector to allow it and the products coming from it to compete in the global market.

However, it is also a reality that not all banana farmers and exporters, especially the smaller ones, have access to proper technology or equipment to conduct research and development.

It seemed like an answered prayer to banana industry players when the Tagum Agricultural Development Company Inc. (Tadeco) launched its Agri-Technology Outreach Program to cater to the needs of the industry. The program was realized through the company’s investment of over P100 million and a grant from the Dutch government through their Promo Banana Project.

"It (Agri-Technology Outreach Program) is of great help because the small exporters and growers do not have their own facility and laboratory to level off with the big ones," Doctor Evelyn Magno, executive director of the Mindanao Banana Farmers and Exporters Association (MBFEA), a small group of banana farmers and exporters, said during an interview at the launch of the program on March 12, 2018.

According to its brochure, the Agri-Technology Outreach Program caters to early detection of diseases such as Fusarium oxysporum f. sp. cubense Tropical Race 4 (Foc TR4), which is the main cause of Panama Disease or the Fusarium Wilt. The program also offers extensive analysis and reliable recommendation for chemical solution and produces robust and disease-free plantlets.

Magno said among the biggest problems of the banana industry right now are the pests and diseases.

"By opening the laboratory to everybody, it is really a great factor to help the (banana) industry to improve," she said.

Magno said they have been urging the government for quite some time now to put up a laboratory that can be used by small banana farmers and exporters.

"The government, up to now, is all promises and it (laboratory) has not been realized yet. We are lobbying for it but it is difficult," she said.

Magno also pointed out that with Tadeco's Agri-Technology Outreach Program, small banana farmers and exporters do not have to spend millions in putting up their own laboratories.

In his message during the launch, Anthony Valoria, Anflo Group of Companies President and CEO, said for banana farmers and exporters in the region to be able to check on soil nutrient status, diagnosis of diseases through conventional and molecular approaches quickly will be a huge advantage for the banana industry.

The program, which has its receiving area in Carmen and the laboratory in Tadeco, Panabo City, both in Davao del Norte, offers services in entomology nematology, plant pathology, tissue culture, and chemistry laboratory.

"Furthermore, we will be selling tissue cultured planting material that is Fusarium Wilt tolerant as well as selling trichoderma packs that we ourselves use extensively and consider integral to our program against Fusarium Wilt," Valoria said.

Dr. Benny Corcolon, Tadeco vice president for research, information, and compliance division, said the services offer through the program are around much cheaper as compared to similar services offered by other laboratories. No data on the comparison of their services and those given by other commercial laboratories was provided.

For example, based on the price list provided by the company, molecular detection of Foc TR4 and virus or disease indexing is pegged at P700 to P2,100 per sample and depending on the type of test under their PromoBanana rate.

Those who are availing of the services offered by the program can also be assured that only experts and personnel in the banana industry will be examining their samples, conducting the tests, and analyzing the data produced.

Valoria said they are doing this program in a bid to help the banana industry get back on its feet after it has been plagued by different problems -- like pests, diseases, stiff competition from Latin America bananas, and climate change -- over the course of the years.

"From 2011 to 2016, annual fresh banana exports of the Philippines dropped by 50 million boxes. In the same time frame, annual banana exports from Central and South America increased by 137 million boxes. Thus we see their bananas in China, Japan, Korea, and the Middle East in increasing numbers," he said.

Valoria added that in the last Corbana meeting, Central and South American banana associations stated clearly that they will continue to penetrate the Asian market.

"We cannot allow that to do that. Together, as the Philippine banana industry, we must meet and defeat that threat to our markets. That can only be achieved if our industry will produce much more banana exports.... These laboratory services and products will be integral to the success of those objectives," he said.

Valoria added that through their advantage of a world class agricultural laboratory and technical personnel, they were able to hit new production levels with Tadeco producing 35.99 million boxes and its ABC farms producing another 3 million boxes for an aggregate of 39 million boxes.

"We want to share this advantage with the rest of the banana industry," he said.

Those who would want to avail of the services offered by the Agri-Technology Outreach Program may visit their receiving site at Magsaysay, Carmen, Davao del Norte, beside Shopfast.