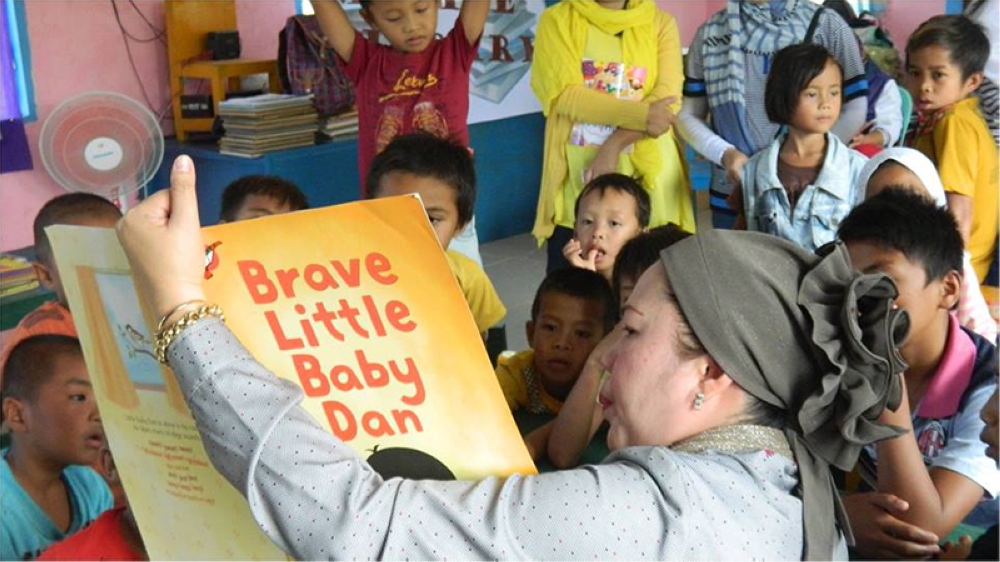 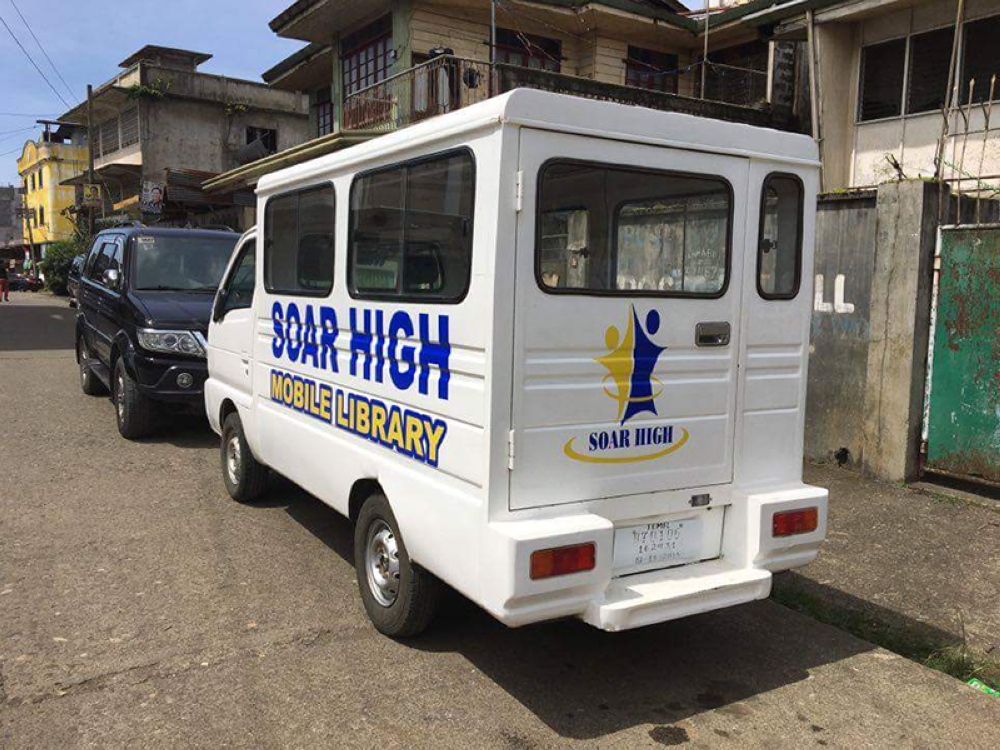 - The Soar High Mobile Library that goes around Lanao del Sur to introduce to kids and adults the love of books and learning. (Prof. Sorhaila Yusoph)

IN A province such as Lanao del Sur where literacy is almost a privilege and access to literature is a luxury, an innovative method of bringing books closer to communities is taking root.

Called Soar High Mobile Library, the mobile repository of knowledge and stories has shared its books to 217 areas and counting.

During the Marawi siege, the truck has already reached the municipalities of Ramain, Taraka, Balo-i, Marantao, Kalawi, and Ganassi. They will be going to more places to reach out to more potential readers.

The Mobile Library also gathers book donations to donate to schools and local libraries, allowing more books to be accessed by the target reading public.

Soar High is the brain child of Marawi City-natives Professor Sorhaila Latip-Yusoph and her husband, Engineer Ali Yusoph. The couple founded the initiative in 2013 as a means to combat the low literacy rates in the region. The couple was inspired by the first verse of the Qur’an: "Read in the Name of the Lord," which has been told by Prophet Mohammad (SWT).

The initiative started as an experiment with 50 kids living near Lake Lanao where Prof. Yusoph and her students shared to them old books and encyclopedias donated by friends. In the program, there were also food and giveaways and coloring activities.

In its first launch, Prof. Yusoph described the experience with one word: Joy.

“When we experimented in the first launch, I said to myself, this is what I want to do for the rest of my life,” Prof. Yusoph said about the library. Engineer Yusoph affirmed this talent of hers in giving and community service.

Prof. Yusoph said that not everything is learned in the classroom, and it is Soar High Mobile Library’s aims to extend this knowledge to more kids who need literacy enhancement.

She also said that contributing to the dipping literacy rates in the Region is that the Meranaws, the major tribe in Lanao del Sur, is not a reading public.

She further describes that reading books is not a priority in the Region.

In its public schools, books distributed by the Department of Education (DepEd) is lacking. Several children also have to share with one book because of the scarcity of it.

Big Books, which are most appropriate for young learners, are all the scarcer. In a child’s elementary years, he or she will have only seen one or two of these.

The goal of Soar High Mobile Library is not only to allow access to their mobile library, but also to donate books to the libraries so children can have access to big books and other books all year ‘round.

The couple, with the support of the US Embassy, ABAG Kalambuan Foundation, and MSU-Integrated Institute of Technology (IIT), published the Ranao Monster in 2017.

The 11” x 18” big book is an advocacy material of the My Lake Lanao Project to campaign for the environmental awareness and preservation of Lanao del Sur’s lake.

The story, written in English and Meranaw language, tells children of the story about the monster the rises from the lake whenever they throw garbage there, which in turn, will teach children values and inspire them to take care of Lanao.

Donors from all over the world

The Mobile Library runs only by the personal funds of Prof. and Engineer Yusoph and book donations from various persons and organizations.

Whenever someone offers them monetary assistance, they refuse the kind act, and instead, encourage the donor to buy books to add up to the collection of books to be given or shared by the mobile library.

The multicab that carries the books was donated by Anak Mindanao (AMIN) Partylist.

The Library had its first set of books when Prof. Yusoph posted in Facebook before, asking friends for old books. She also asked that if they ever buy books from bookstores, they should buy extra books to donate to Soar High.

Book donations have started coming in for Soar High since then, even coming all the way from New York.

A friend of Prof. Yusoph, Cristina Newhart, had a New York-wide book drive for used books and sent these to Marawi.

In Davao Oriental, an organization there held a charity concert where proceeds went to buy books in Cagayan de Oro with them. Prof. Yusoph shared that they never accept money.

Other donors were Philippine Toy Library, in a library renewal partnership, and the Land Rovers Club of the Philippines.

Books sent to Soar High mostly come from Manila or published abroad. Some of the lessons or knowledge the books share may be difficult to understand for children coming from Lanao del Sur because of cultural and religious barriers.

To cope with this challenge, the context is processed by the staff of the library during their outreaches and after reading sessions.

Lessons are processed in the light of Islamic and Meranaw point-of-views for better understanding of the lessons.

For elementary children, big books are given. Synthesis then follows. For high school readers, they are given novels which they have to finish reading after two weeks. After the given reading period, the readers are then asked what they have understood in the story. Processing and verification of learnings then follow, which is usually done in small groups. Higher order thinking skills are employed and fostered through this method.

For ALS readers, fact magazines and short reads are given. These reading usually contain general facts or contemporary issues to read.

Soar High’s collection of books are in English and Filipino. They do not have books in Meranaw vernacular language because of the unavailability of it. The Meranaw orthography is not yet formalized as well, leaving Meranaw still an oral language. Islamic books are, however, available in their collection.

Aside from the multicab, Soar High originally had three public libraries in Marawi City. These are located in Gomisa Avenue, their first library; near Amai Pakpak Medical Center, and in Barrio Salam in MSU-Marawi.

During the siege, however, their first library was destroyed. Prof. Yusoph shared how the books donated there were wasted.

The Avenue is the location of Masjid Bato, one of the main bases of the ISIS-inspired terrorist group, the Mautes. During the air strike, the library was also hit by the bombs.

This summer, they hope to open back their library near Amai Pakpak. The only active library that Soar High has now is located in Barrio Salam.

Literacy to battle conflicts in Mindanao

Engineer Yusoph said that at first, beginning to read is difficult. However, “darating rin and time na mamahalin mo ang pagbabasa (You will eventually come to love reading),” he said.

He said that he placed in faith in the values formed and instilled among their readers, which will someday be the solution to the decades of conflicts in Mindanao. He said that reading will become a primary factor for this.

“Even in caring for books will also instill something to children,” he shared.

He said that he envisions a time where Meranaws and non-Meranaw will read in the same room together in peace with each other.

Soar High hopes to see a future of not just literate citizens, but hopes to spark the creation of book clubs and give birth to writers that will pass on the legacy of reading to other people.

At the end of my interview with the couple, Engineer Yusoph shared to me that there are two types of persons that people usually admire: First is the rich person, and second, the knowledgeable person. Being the latter is better. I also believe that spreading the culture of preferring to become the latter would be good.

How can you help?

Soar High Library would accept with open arms any book donation you would like to extend for the children of Lanao del Sur. You may reach her through her email, sorlatipyusoph@gmail.com or her contact number 0920-966-7460.