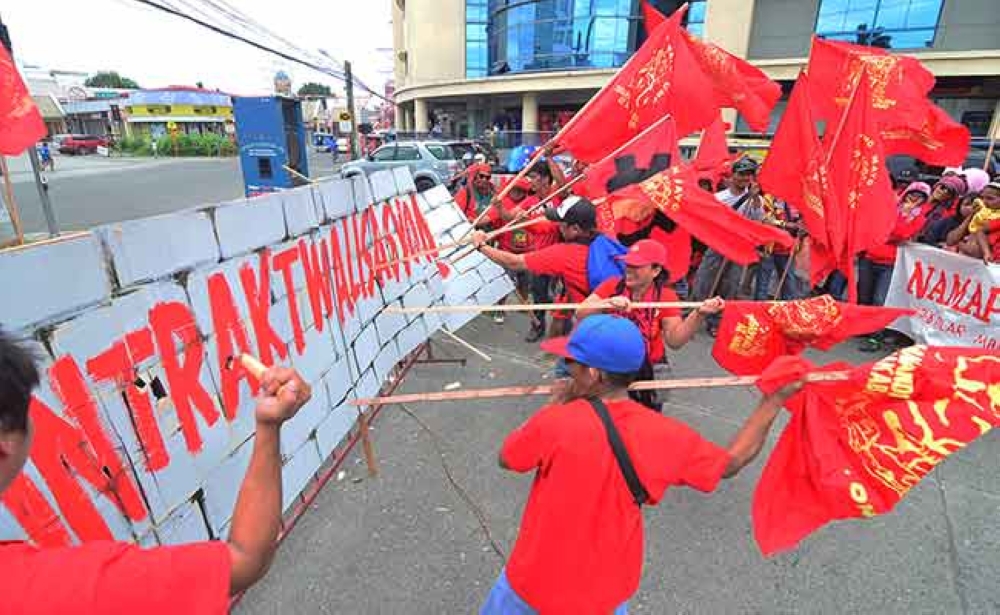 DAVAO. Protesters try to take down a banner with the word "Kontraktwalisasyon" to dramatize their demand for an end to the end-of-contract (endo) scheme. (File Photo)

"I believe so," Presidential Spokesperson Harry Roque Jr. said in an interview with Palace reporters, when asked if the President will no longer issue an EO that will impose a total ban on temporary work arrangements.

"Although we were all looking forward to the EO, an EO can only do so much. As you know, in our system of government, the executive, through an executive order, can only implement the law," he added.

Roque earlier announced that the President will likely sign the draft EO by May 1, Labor Day.

He said Duterte had agreed with Labor Secretary Silvestre Bello III's proposal to leave the fate of contractual workers to Congress, the sole branch of government that can make amendments to the country's Labor Code that currently allows contractualization.

"It's now left to Congress," the presidential spokesman said.

"The position of Secretary Bello now, which is the position of Malacañang, is let's see what kind of legislation Congress will finally approve, noting that the matter is now pending in the Senate alone because the House had already passed its version," he added.

Under Articles 106 to 109 of Presidential Decree 442 or the Labor Code of the Philippines, employers are allowed to enter into contractual arrangements with their employees.

The department order, however, is still not seen as a solution to totally end the unlawful forms of contractual arrangements.

But for Roque, he said Duterte, as emphasized by the Trade department, had already fulfilled his promise to stop the practice of "endo" or end-of-contract scheme.

"I've been informed by the Department of Trade and Industry that the President has already complied with his election promise to do away with the endo," he said.

For now, Roque said what could be expected from the President is the possible certification of security of tenure bill as urgent.

"Let's see if the certification as urgent will come out very soon," he said. "I will find out because that seems to be the solution for all. That would be the solution so that the Senate can fast track the passage of the endo bill." (SunStar Philippines)