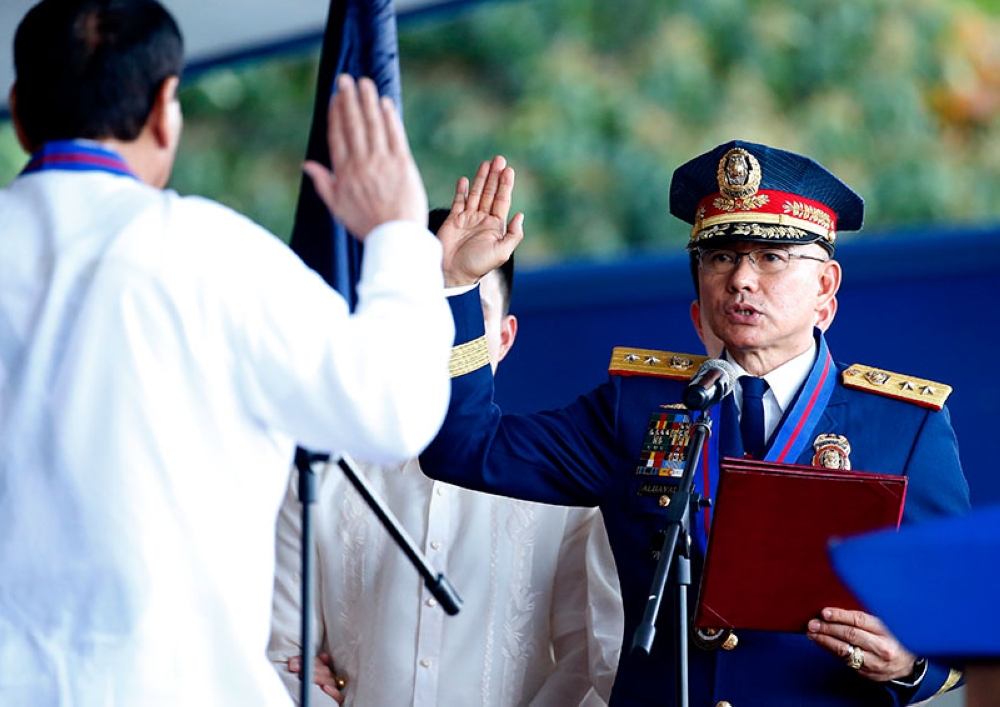 Born in San Fernando City in the province of Pampanga on November 8, 1963, Albayalde is known for being a strict and a hands-on leader.

Albayalde said he grew up with strict parents, his late father having been a military man.

Albayalde said his late father had the biggest influence on him particularly when he entered the Philippine Military Academy (PMA) in 1982 after studying at the University of Assumption in Pampanga for two years.

He also holds a masters degree in Public Administration at the Manuel L. Quezon University in Manila.

(I wanted to be an engineer because I have cousins who are engineers with good jobs. That inspired, motivated me. But when I finished high school, we did not have the money to support my studies in Manila. I was forced to enroll in a college at home.)

(Even when I was in high school, my father kept telling me to go to PMA. I did not know anything about PMA. I had not even gone to Baguio. My father used to tell me that life was hard there but when I graduate, I would be a lieutenant. The first time I went to Baguio was when I reported for my first day at the PMA.)

After graduating from the PMA, Albayalde became a member of the elite Special Action Force (SAF).

Albayalde also served his beloved province when he was appointed as the Pampanga provincial police chief although he was relieved from the post due to command responsibility after several of his men were found to be involved in illegal drugs activities in Mexico town. The case was, however, dismissed.

He gained credibility when he was appointed as the regional director of the National Capital Region Police Officer (NCRPO) in July 2016.

His strict but hands-on leadership caught the attention of President Rodrigo Duterte, who announced his appointment two weeks ago.

“The stricter the better," said Duterte.

One of Albayalde’s “defining moments” was when he successfully led the 20,000 strong NCRPO who were deployed to different venues and routes for the 31st Association of Southeast Asian Nations (ASEAN) Summit in 2017.

He was seen roaming around on board his big bike to make sure police forces were in place and doing their job.

Albayalde also made history when he relieved the entire police force of the highly-urbanized city of Caloocan due to the involvement of several of its cops in the killing of teenagers Kian delos Santos and Carl Angelo Arnaiz. The killings became a rallying point against the Duterte administration's war on drugs.

In February, Albayalde conducted an inspection in some police stations in Metro Manila, which resulted in the dismissal of police officers and commanders who were caught sleeping or drinking while on duty.

As he took the leadership of the PNP from outgoing PNP chief Ronald dela Rosa, Albayalde vowed to intensify the campaign against illegal drugs and the internal cleansing in order to fulfil Duterte’s promises to the public to make the country safer.

He assured that there will no letup in cleansing the PNP's ranks.

Meantime, Albayalde urged the entire police force to work as a team and expect the police commanders to adapt his ways just like the conduct of surprise inspections in the police station.

“As much as I enjoy conducting surprise inspections, I may not be able to reach all of our 2,766 police stations nationwide. So I expect our provincial and city directors to conduct these surprise inspections to regularly assess the operational readiness of our forces on the ground. I will be accessible 24/7 and I expect all our commanders to be accessible anytime of the day too,” he said.

“I shall set high expectations for performance, but I will be fair and just. We shall seek to put the right person at the right position and for this purpose, we will strengthen the oversight committee which will regularly evaluate the performance of all commanders on the ground, including regional directors,” he added. (SunStar Philippines)
< Previous PageNext Page >