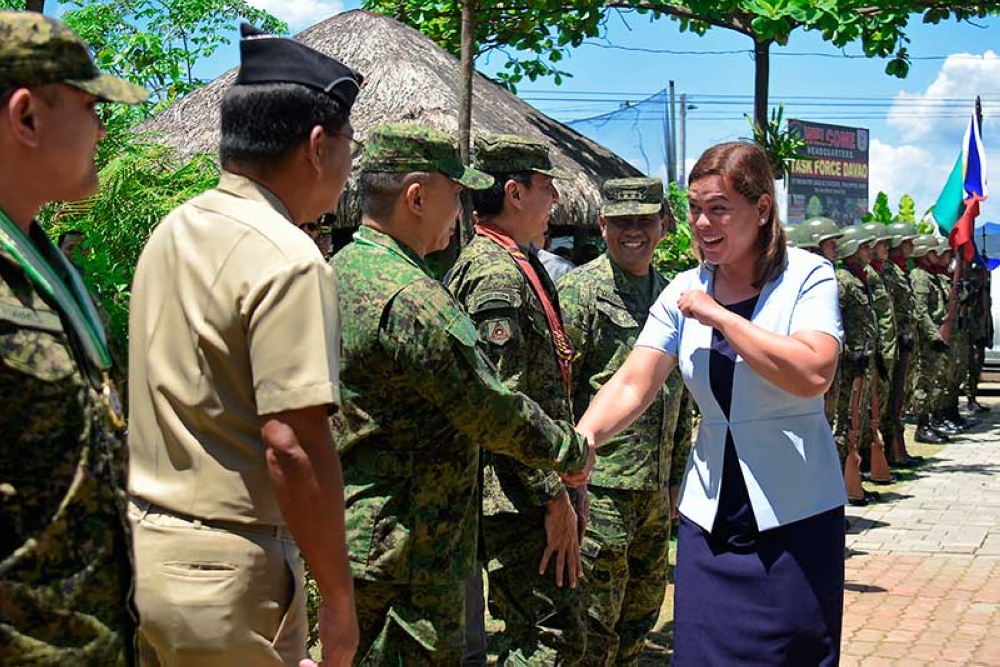 DAVAO City Mayor Sara Duterte-Carpio challenged the Task Force Davao to achieve zero terror incident in the city for the next 10 years.

(My biggest challenge for Task Force Davao is 10 years and even more years of zero incident here in Davao.)

She congratulated and commended the efforts of the TF Davao troopers.

“Allow me to give my commendation for your anti-terrorism that has proven to be very dynamic and responsive throughout the years. While there have been countless challenges, I could say that the past 15 years have seen more successes in capturing and fighting against and apprehending criminals and terrorist,” Duterte-Carpio said.

The task force was activated in 2003 following the twin bombing incidents at the Davao airport and Sasa Wharf. Duterte-Carpio said over the years, TFD has become a source of pride for Dabawenyos.

“Task Force Davao has been soaring to great heights in keeping Davao safe and secure. The city is beyond appreciative of your passion and work. A major factor of what Davao now is attributable to all your efforts and hard work, that is always my message when I come here,” she said.

She added that Dabawenyos are lucky because there were no abuse complaints filed against any Task Force Davao personnel that were recorded in the city.

She also lauded TFD as it only received less complaints on the performance of their duty and urged them to continue with their good performance to achieve zero complaints about their work and service.

The city mayor also acknowledged TFD’s participation during rescue, relief and evacuation and security operation that “empowered the city to stand tall, united and resilient.”

Meanwhile, TFD commander Colonel Nicolas Mempin thanked various stakeholders for their support to the accomplishment of TFD mission and vowed to perform their duty beyond what's expected.

“Task Force Davao continuous to live by its mandate by securing Davao City from terrorist threats and supporting its duly constituted authorities in all its development programs to all Dabawenyos,” he said.

He added that the legacy of previous commanders like former TFD commander Brigadier General Erwin Bernard Neri inspired them to work harder to be at par if not surpass the accomplishments in making Dabawenyo proud of Task Force Davao.

Mempin also said that aside from the routine checkpoint operations and security patrol for the year, Task Force Davao has significantly contributed to the apprehension of Cayamora Maute, father of the slain Abdullah Maute, the leader of terrorist Maute group, last June 6, 2017. The elder Maute later died in detention.

They also have recorded several apprehensions in terms of illegal drugs, implementation of area security during various events in Davao City and Martial Law implementation in Mindanao.