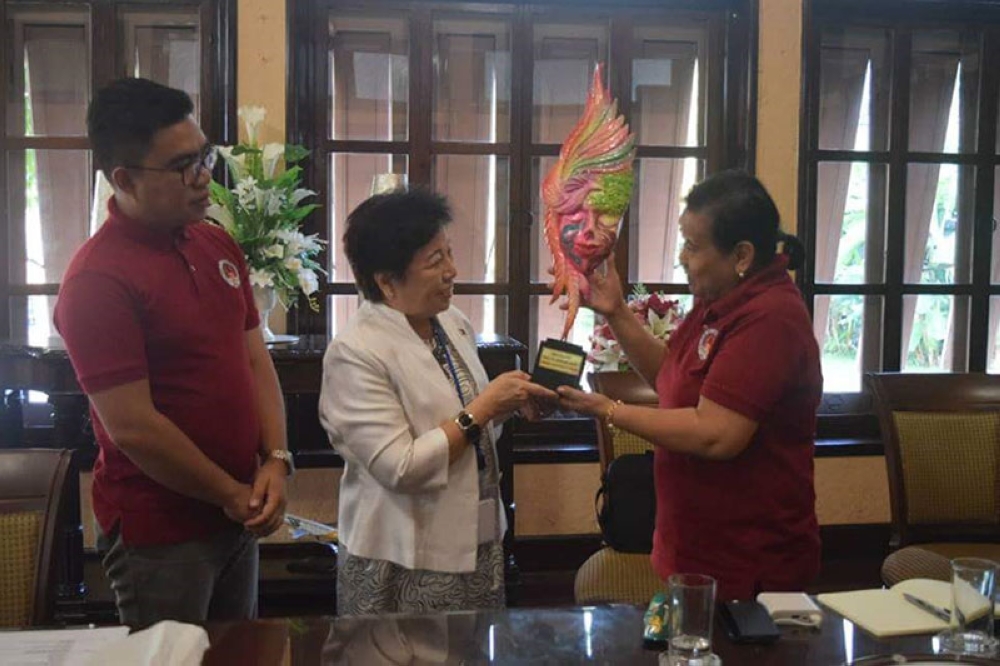 BACOLOD. Philippine Ambassador to Thailand Mary Jo Bernardo-Aragon (center) receives a MassKara-themed present from this writer (left) and Nieves Hibaler-Pepito on behalf of the participants of the 2018 Asean Media and Communication Solidarity Conference during their courtesy visit at the Philippine Embassy in Bangkok, Thailand recently. (Contributed Photo)

THAILAND is still a good benchmark for the Philippines especially in terms of agriculture industry development, an official said.

Her Excellency Mary Jo Bernardo-Aragon, Philippine Ambassador to Thailand, said the latter's government has been providing much premium on its agriculture sector.

In fact, agriculture contributes about 8.3 percent of the gross domestic product (GDP) of Thailand, she said at the sidelines of the courtesy visit of the participants of the 2018 Asean Media and Communication Solidarity Conference at the Philippine Embassy in Bangkok recently.

The participants of the said conference are Master in Mass Communication students of West Visayas State University in Iloilo City, coming from different provinces in Region 6 including Negros Occidental.

Bernardo-Aragon said the Philippines continues to learn the good agricultural practices of Thailand.

“Farmers in Thailand have been receiving assistance from the government in terms of technology like smart farming,” she said, adding that "they are exporting all over the world.”

The official cited "aging population" also as a problem in Thailand like that in the Philippines. But, the former has already addressed such concern through farm mechanization.

Bernardo-Aragon said the problem in Philippine agriculture is that many areas are converted into theme parks and subdivisions, among others.

“Sad to say, in the Philippines, planting is never fun," Bernardo-Aragon said, adding that “here, they started ahead teaching their farmers digital or electronic commerce.”

Deputy Chief of Mission Mary Anne Padua, for her part, pointed out that Thailand is also a very good benchmark for the Philippines in terms of value-adding various agricultural products.

Padua, who was also present at the courtesy visit, said Thailand farmers know how to market their products.

Red rice, for instance, is packaged very well resulting in higher income for the farmers, she said.

“Here, value-adding is very strong. This is a stage that Filipinos have not reached yet," Padua said, adding that “our products remained the same, it has not evolved based on what is the global trend.”

Moreover, the official cited that in Thailand, there is a government thrust to make the Southeast Asian country as the kitchen of the world.

Padua said the way they (Thai) innovate especially in food is just a “touristic” thing capable of attracting the market.

It is something that the Philippines has taken for granted. There is a need for it to also create its own story, she said.

“We have a shortfall in this area. We have a lot of products but we never marketed it this way,” Padua said, adding that “we have not yet fully maximized our potentials.”