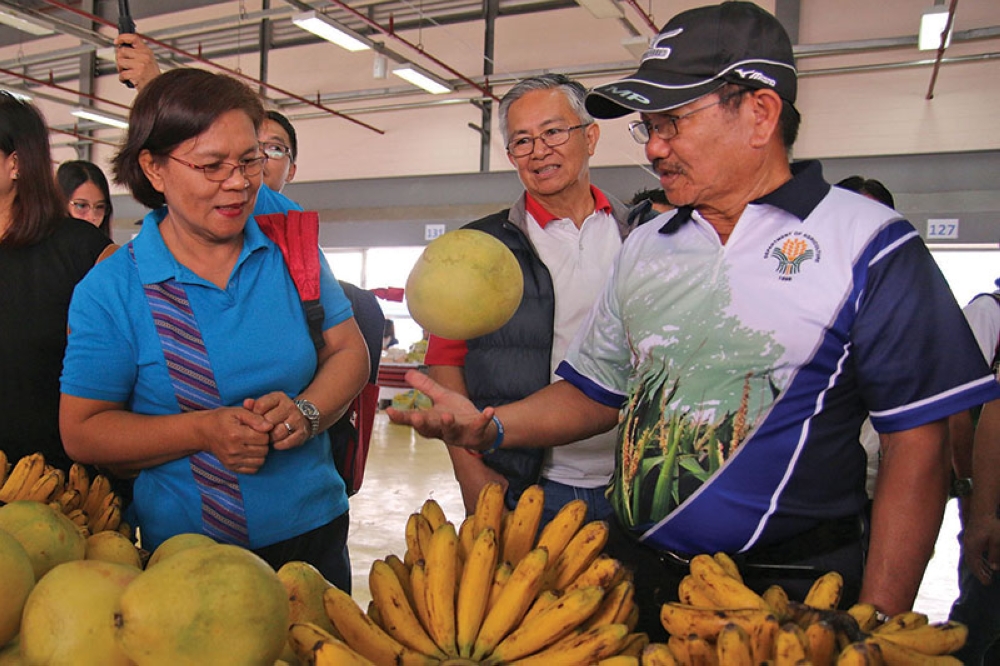 BAGUIO. Department of Agriculture Secretary Emmanuel Piñol checks out a pomelo from Davao, known as the fruit basket of the Philippines during TienDA and farmers forum held at the Benguet Agri- Pinoy Trading Center in La Trinidad. (Milo Brioso)

Piñol said when the cold storage facility is operational, highland produce will not be the sole products the province will house.

The Secretary said fish from Mindanao, fruits from Visayas as well as vegetables from other areas can be stored and shipped to the highlands, marking the importance for the facility.

“We have to have a storage facility,” noted Piñol.

Piñol said the price of fish in the highlands will also be lowered when a cold storage facility is operational.

Last year, in a study done by the University of the Philippines Los Banos with the United States Agency for International Development (USAID) which aimed to reduce post-harvest losses by developing a cold storage facility and also identify high value crops which require cold storage to prolong shelf life showed the following results.

Eighty- nine percent of respondents sold produce right after harvesting and sell on the prevailing prices in the market even when the prices are low. The study also shows that majority of the farmers has no storage for yield.

The study also noted that there is a need for storage place of vegetable crops to maintain their quality and prevent post-harvest losses.

Average post-harvest losses seen on the fields were pegged at 208 kilograms followed by handling of produce in the field with an average of 95kgs.

The study culled data from 119 farmers from Atok, Bakun, Buguias, Kabayan, Kapangan, Kibungan, La Trinidad, Sablan and Tublay in Benguet as well as Bauko and Barlig in the Mountain Province and Tinoc in Ifugao.

Piñol attended the launching of the “TienDA,” where farmers from Central Luzon, Ilocos Region, Calabarzon, Cagayan Valley, and Soccsksargen converged at the BAPTC to sell produce, fish and other products.

Piñol said TienDA is a program rolled out by the department in the hopes that when suppliers meet during the market day inspired event, an exchange of ties and business will push through.

The Cordillera TienDA was set on April 27 to 28 at the BAPTC Strawberry Fields, La Trinidad, Benguet.

Over the years, the province capital has been tagged as a center for trade, production and marketing of produce from its neighboring towns.

It is seen that when the BAPTC becomes fully operational there will be a facility area for products and the DA will help find target markets for each product the province identifies as its champion commodity.