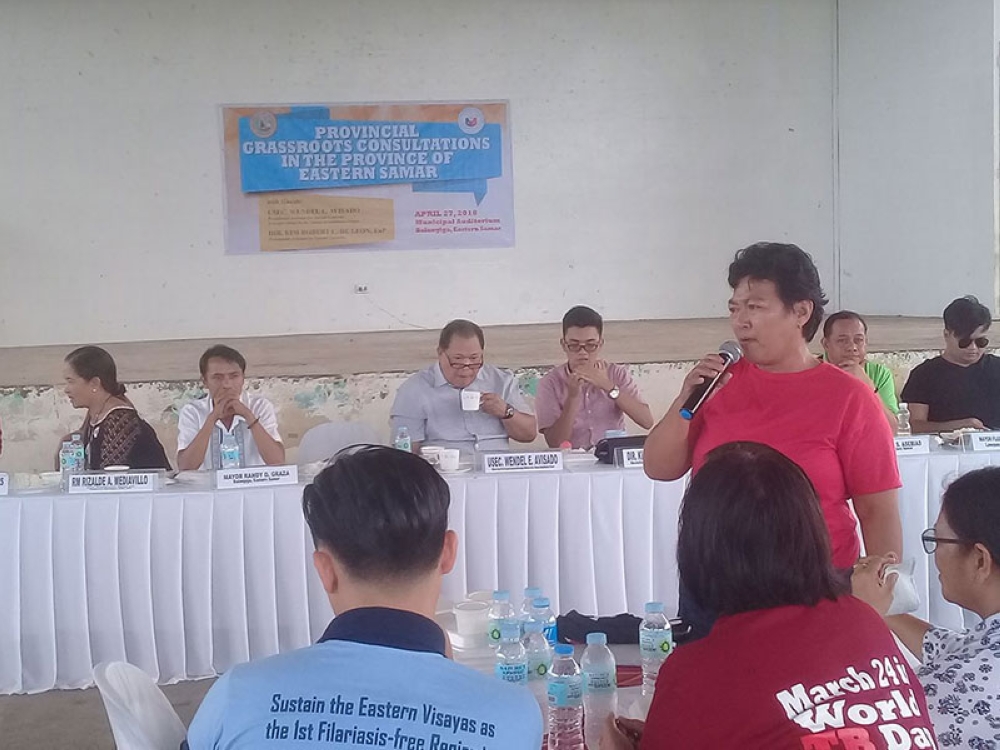 BALANGIGA, Eastern Samar -- The series of provincial grassroots consultations, spearheaded by the Office of the Presidential Adviser for Special Concerns and Oversight Office for Yolanda Rehabilitation as tasked by President Rodrigo Duterte, which ended in this town last Friday, April 27, bared the extent of the housing problems for the 2013 Super Typhoon Yolanda survivors in Eastern Samar.

“We can listen to a litany of complaints. But the biggest challenge is what we can do fast today so that our remaining time will be converted into something wholesome and would make the people appreciate it,” Usec. Wendell Avisado told about 500 stakeholders mostly from Community of Yolanda Survivors and Partners (CYSP) along with town mayors and officials from national agencies, in Eastern Samar during the open forum at the town’s gymnasium.

“Even though Pres. Duterte inherited this Yolanda, he is not neglecting it. He’s doing everything in order to deliver what is due to the beneficiaries,” said Avisado, while assuring that the house and lot of the recipients at the resettlement areas are for free.

Avisado, who was also accompanied by Director Kim de Leon of the Oversight Office for Yolanda, appealed to the beneficiaries to be “more understanding on this situation,” saying that the president is “not a superman.”

“We’re looking ways and means to speed this up,” he added.

Also, he admitted that what happened in the government-led Yolanda rehabilitation is a “vicious cycle” due to its “bureaucratic” system.

“After three or five years, we’re still on this, building one house post,” Avisado lamented as he noted on how the government’s policy itself, aside from its lack of consultation and coordination to the affected communities, is also the cause of the delay in the rehabilitation.

He added that they have plenty of changes that they want to implement in rehabilitation process -- particularly on government resettlement projects—so it won’t take long, this includes giving exemption on the basis of land certification, development permit, and provisional authority, among others.

In Balangiga alone, town mayor Randy Graza disclosed that of the 460 housing units intended in their two resettlement areas, only 200 units were still in various stages of its construction and that only two housing units were completed. The housing project, which cost P290,000 per unit, started in 2014.

“And these units are also ‘substandard’, the reason why the construction was stopped,” Graza told reporters.

“We expect that we will be informed about the project,” Graza appealed to the National Housing Authority, saying that the project will become more dilapidated as days go by since it is exposed to various elements.

The mayor also opined if that housing fund should be “downloaded” to the local government units and that the government should allow the affected families to rebuild their houses near to where they get their source of income.

Avisado, during the forum, also agreed on this plan.

“The contractors need to be held accountable also for the substandard units or construction that they do,” Rina Reyes, project coordinator of land rights group Rights Network and leader of CYSP, told SunStar.

She added that NHA is also answerable on this.

Lita Bagunas, president of Uswag Este-Katarungan, a federation of typhoon-affected farmers, fisherfolks, and informal settlers in Eastern Samar, complained about their resettlement project in the municipality of Giporlos, saying the houses are “too small, far from the source of livelihood.”

The Greenfields project was started in October 2017 and is expected to be completed in November this year, Punzalan added.

Giporlos mayor Mark Biong said that they are doing revalidation on the housing recipients to “ensure that the poorest of the poor” will benefit from the project while hoping that his town will receive another housing project from the national government for his affected constituents.

He also denied that they are not conducting consultations with the stakeholders at the same time.

As of April 23 accomplishment status, NHA reported that of the 743 housing units in Greenfields, 566 units are currently in various stages, no completed unit yet, while land development is at 36.14 percent.

During their resettlement site visit in Barangay Can-amo, in Lawaan town, Avisado and de Leon personally saw how the wall of one housing unit “shook” when the officials attempted to push it.

The event was caught on video by CYSP.

Presidential Adviser for Special Concerns and Oversight Office for Yolanda Rehabilitation Director Kim De Leon last Friday, April 27, inspected one of the houses included in the 2014 housing project for Yolanda survivors in Eastern Samar. Video by Community of Yolanda Survivors and Partners.

“What came out from this dialogue is the negligence of NHA. They cannot simply pass this on to the contractors. It’s the NHA that has the social contract to the people, and they are reneging on that contract,” Reyes said in an interview, referring to the “substandard” construction and long-delayed Yolanda housing projects.

In Samar Forestdale project located at Barangay Cantubi, Balangkayan, NHA reported that out of 390 units, 232 are in various stages of construction, 158 completed, and 88.48 percent in land development. In Barangay Cantubi, 159 units were bid out while no figure was still available on the number of finished units and percentage in land development.

In Quinapondan, Town Ville Site 1 in Barangay Buenavista has 343 units bid out, 16 units in various stages of construction, no completion yet, and 14.74 percent in land development.

In Monte Peak Estate in Brgy. San Isidro, Lawaan, 949 units were bid out, 227 units are in various stages, 9 units complete, and 45.92 percent in land development.

He, however, did not disclose to the media the names of the housing project developers. (SunStar Philippines)
< Previous PageNext Page >