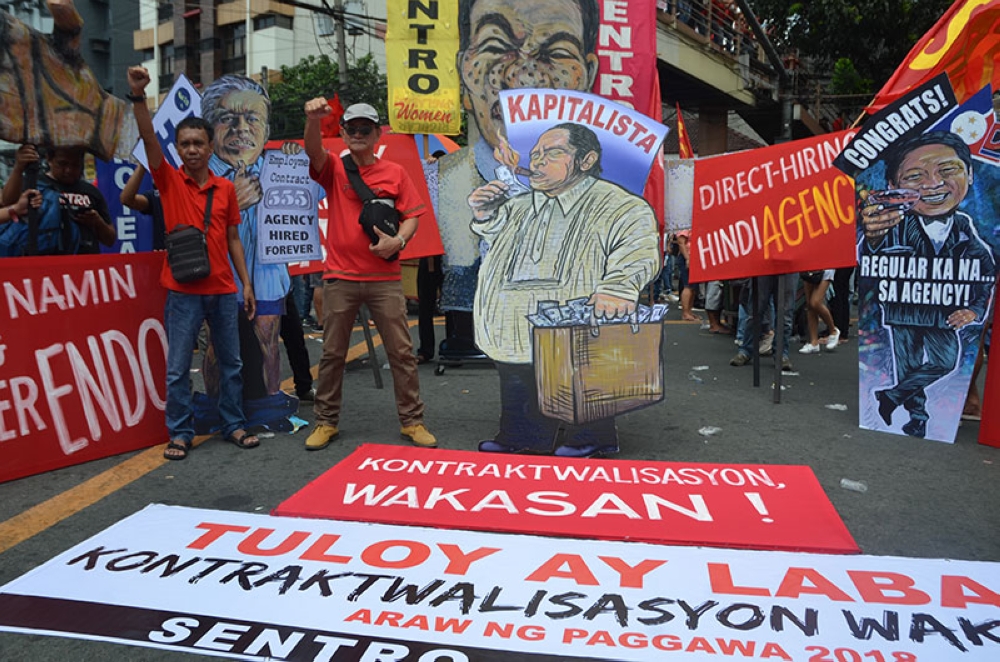 MANILA. Militant workers converge in Mendiola to protest contractualization, which is still allowed under the Labor Code. (Alfonso Padilla/SunStar Philippines)

LAWMAKERS from the Makabayan bloc said the executive order issued by President Rodrigo Duterte to end unlawful contractualization is useless because this is already provided for in the Labor Code.

What the workers need is a policy that will end all forms of contractualization and allow only direct hiring, not through employment agencies, they said.

Bayan Muna Rep. Carlos Isagani Zarate said the executive order, which the President signed on Tuesday, May 1, is meant only to appease the workers demanding for an end to "endo" (end of contract scheme).

"Endo" refers to a system where employers fire employees before their six-month contract ends to avoid paying for benefits being accorded to regular workers like paid leaves, bonuses, membership contributions in the government pension fund and health insurance coverage.

(It is useless because labor-only contracting is already prohibited under the Labor Code. What is needed now is to prohibit all forms of job contracting.)

(This EO is merely meant to appease workers who are angry because of President Duterte's failure to fulfill his promise to end endo and contractualization.)

Anakpawis Party-list Rep. Ariel Casilao, for his part, said he saw nothing new with the order.

Casilao said that what workers demand is the total ban on contractualization through a direct hiring policy.

He noted that the ban on labor-only contracting is already provided for in existing laws but employers continue to abuse it.

"Permissible and allowable contractualization should only be limited to seasonal and project based work with a strict provision of prohibiting repeated hiring of project based with same principal employer," he further added.

President Duterte has acknowledged that the EO he signed is not enough and urged Congress to amend the Labor Code.

The President described the existing code as "outdated" and said amending it would provide a lasting solution to the problems brought about by contractualization. (SunStar Philippines)