Labor groups: Struggle vs 'endo' on 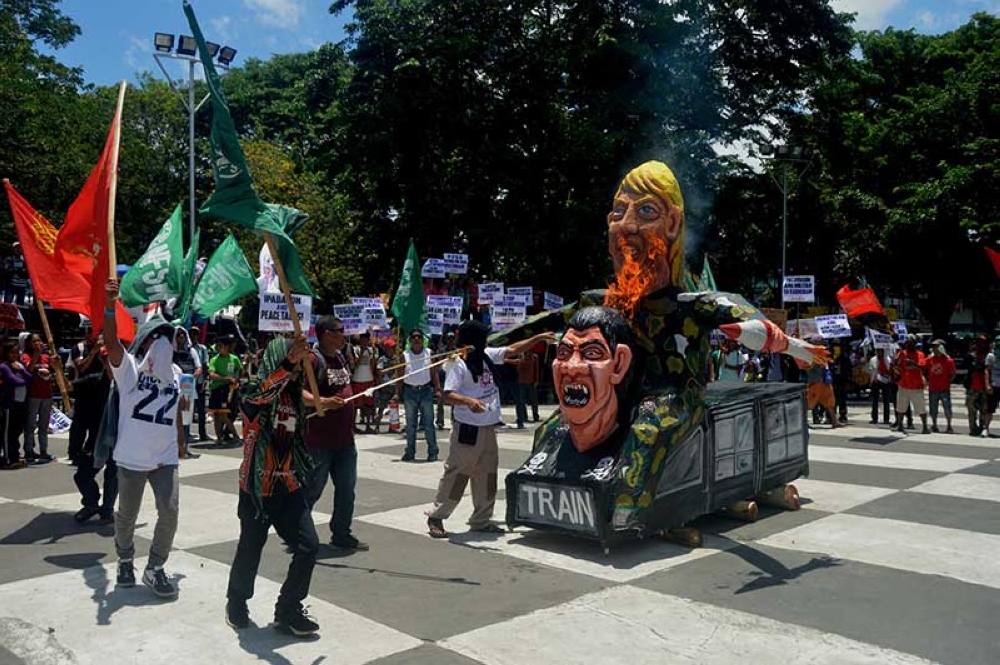 FOR labor groups in Negros Occidental, the struggle is not yet over despite President Rodrigo Duterte finally signing the Executive Order (EO) imposing a total ban on all forms of unlawful contractualization in the country.

Wennie Sancho, secretary general of General Alliance of Workers Association (Gawa), said though the signing is a welcome development, it is still premature for the labor sector to rejoice until the implications of the order to the working class will be fully scrutinized.

Sancho, at the sidelines of the Labor Forum for Solidarity, said the signing of the EO is a measure to put out the fire of discontentment felt by the workers against the government due to high prices, low wages, and poverty.

"Despite the jubilation, the struggle is not yet over," he said, adding that "though it was already signed, we are not yet totally relieved."

Duterte signed the EO during the Labor Day celebration in Cebu City Tuesday, May 1.

This came amid the labor group's loud and persistent clamor for his "failure" to stop the end of contract (endo) in the country, which he promised during the election campaign.

The EO states that "contracting and subcontracting, when undertaken to circumvent the workers' right to security of tenure, self-organization and collective bargaining and peaceful concerted activities, pursuant to the 1987 Philippine Constitution, is hereby strictly prohibited."

Without the EO, companies are still allowed to enter into "legal" contracting and subcontracting arrangements that are not banned, as provided by Department Order 174 of the Department of Labor and Employment's (Dole).

The EO is also applied "to all parties, including cooperatives engaged in any contracting and subcontracting arrangements."

Considering the EO as a gift to the workers, Duterte announced that he made good on his pledge to get rid of the unfair practice of short-term and unprotected temporary work scheme.

"More than a century has passed since the very first Labor Day was celebrated and yet, the struggle for a better life for our beloved workers continues," Duterte said in a keynote speech.

He added that "I assure you that this government will never cease in its effort to provide every Filipino worker with full, dignified and meaningful employment. They deserve no less than decent and comfortable life."

Gawa said there is still a need for the labor sector to be vigilant especially on how the government will implement the order.

"We will continue to keep an eye on the government. We will not stop especially when there are problems on the implementation," its secretary general stressed.

Though they have yet to seek a copy of the EO, Sancho said the order should have provisions clearly stating that "works that are necessary and desirable to the companies or businesses should be regularized."

The Philippine Agricultural, Commercial and Industrial Workers Union-Trade Union of Congress of the Philippines (Paciwu-TUCP) expressed reservations on the newly-signed EO.

Hernane Braza, national president of Paciwu-TUCP, told SunStar Bacolod they have yet to ascertain the order's extent and limitations as there might still provisions that allow contractualization.

Braza said there are really employees who cannot be regularized like construction workers especially those in project-based works.

But like Sancho, the Paciwu-TUCP official asserted that workers doing vital and necessary to the operation of businesses should be free from contractualization.

"We will first scrutinize the guidelines. Without it, our reservations stay," he said, calling on labor front and organized groups to be vigilant in observing the government's implementation of the EO.

"Endo" scheme, he said, has been used by employers to oppress the rights of the workers to security of tenure by non-provision of their necessary benefits like those given to regular employees.

Frank Carbon, chief executive officer of Metro Bacolod Chamber of Commerce and Industry, said they also have yet to see the details of the order.

Carbon said the labor code allows some form of labor contracting and labor laws cannot be amended by the EO.

"But if the President declares illegal some form of labor contracting or subcontracting so long that it does not contravene existing labor laws we will comply," he added.

In his speech, Duterte warned all non-compliant and abusive employers who are engaged in labor-contracting.

"Your days are numbered. I will see to it that our laws are strictly enforced. The government will not rest until we end the shameful labor practice," he said.

The President said the EO is not enough and Congress still needs to amend the "outdated" Labor Code.

"(Because) you have to change or modify or entirely abrogate some of the provisions of the code governing employment practices," Duterte said, as he recommended the entire revision or revisit the previous laws.

Articles 106 to 109 of Presidential Decree 442 or the Labor Code of the Philippines permit companies to enter into contractual arrangements with their employees.

"I remain firm in my commitment to put an end to 'endo' and illegal contractualization. However, I believe that in order to implement an effective and lasting solution to the problems brought about by contractualization, Congress needs to enact a law amending the Labor Code," Duterte noted.

For the local labor groups, they agree that some provisions of the Labor Code should be amended to meet the changes of the time. (with reports from SunStar Philippines)