Changing lives, one pair of slippers at a time 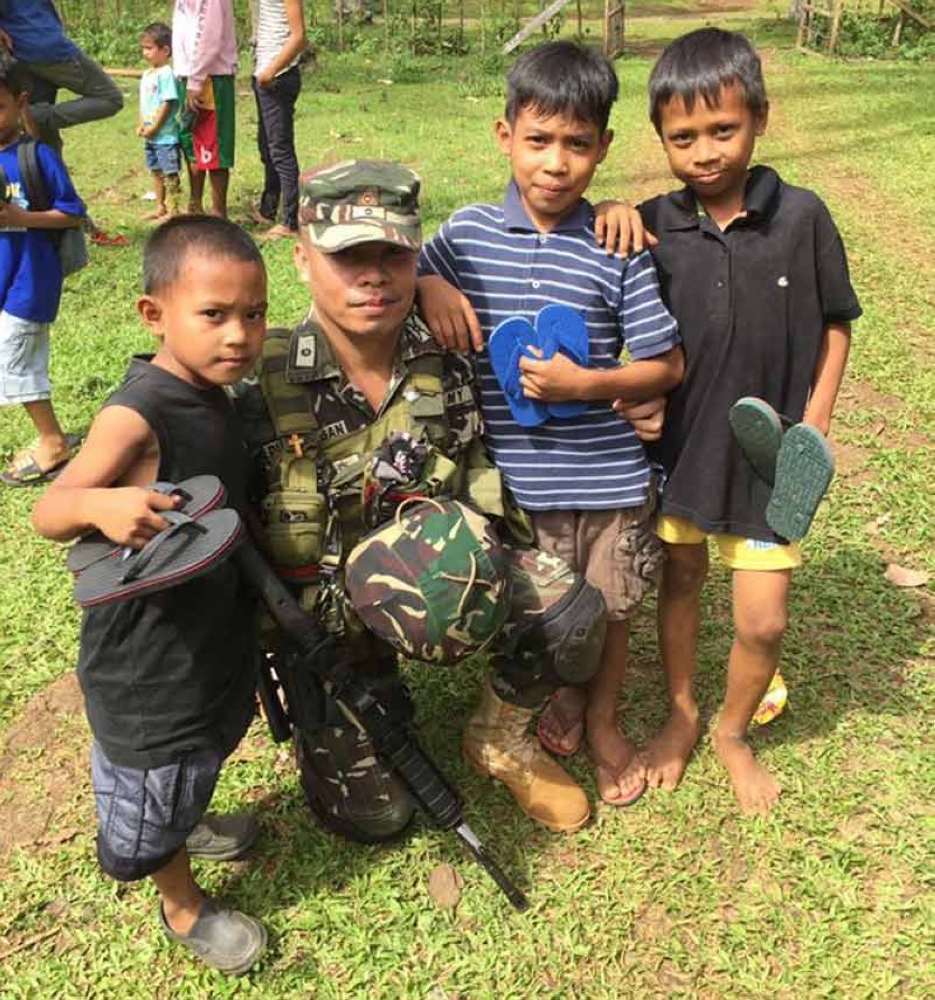 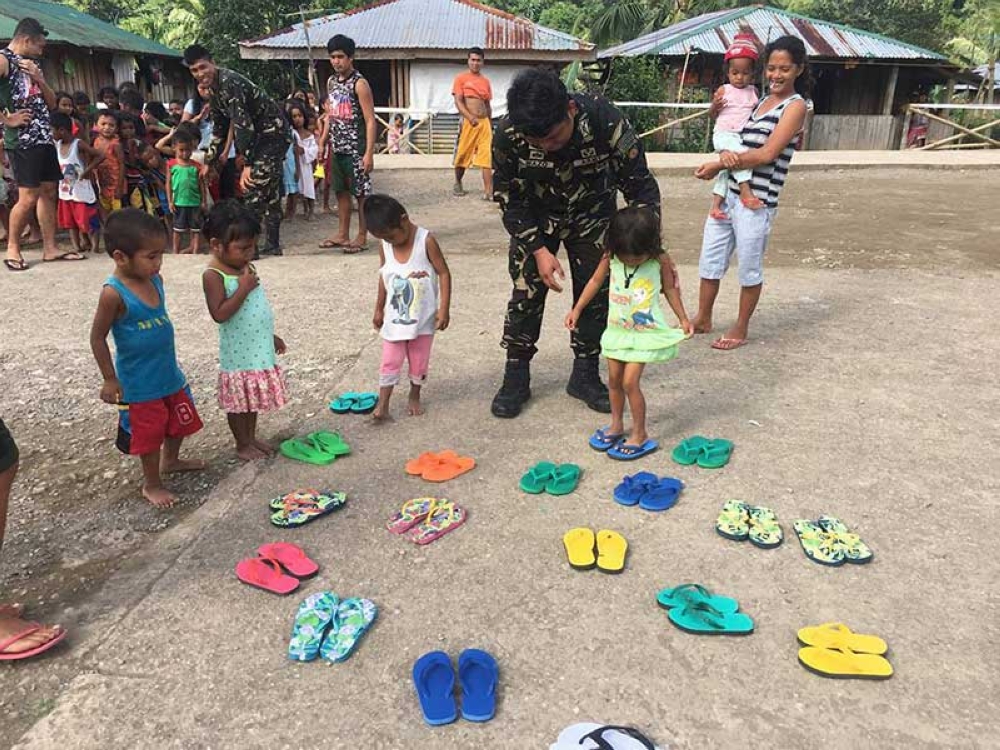 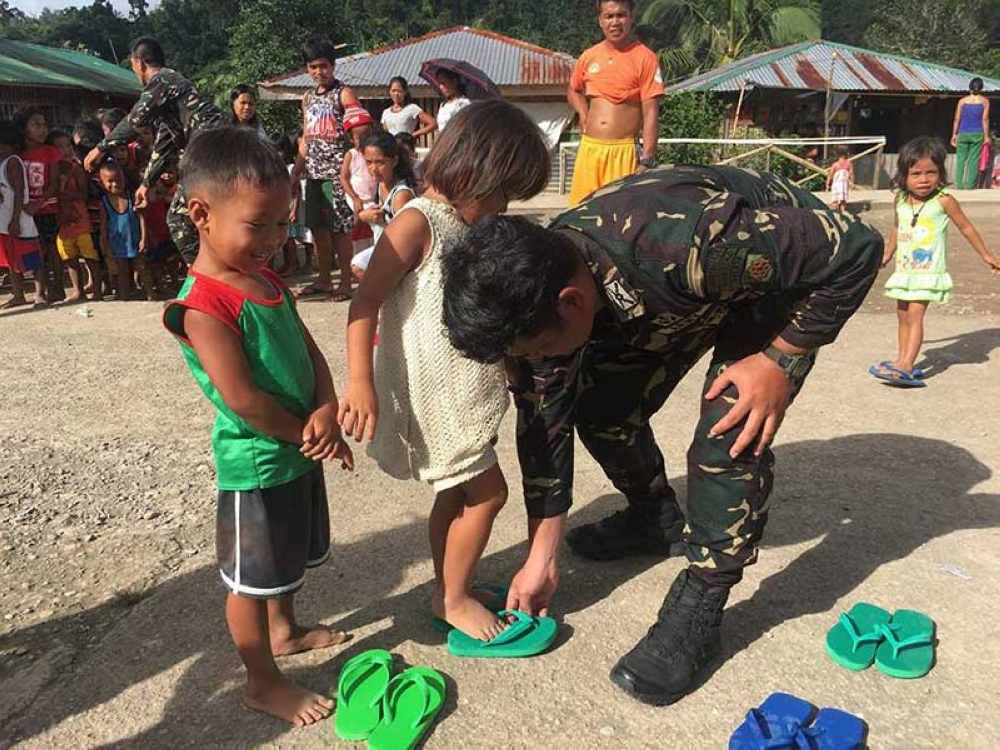 A boy waits for his turn to select for his pair of slippers. (Photo courtesy of "Tsinelas Para Sa Kapayapaan") 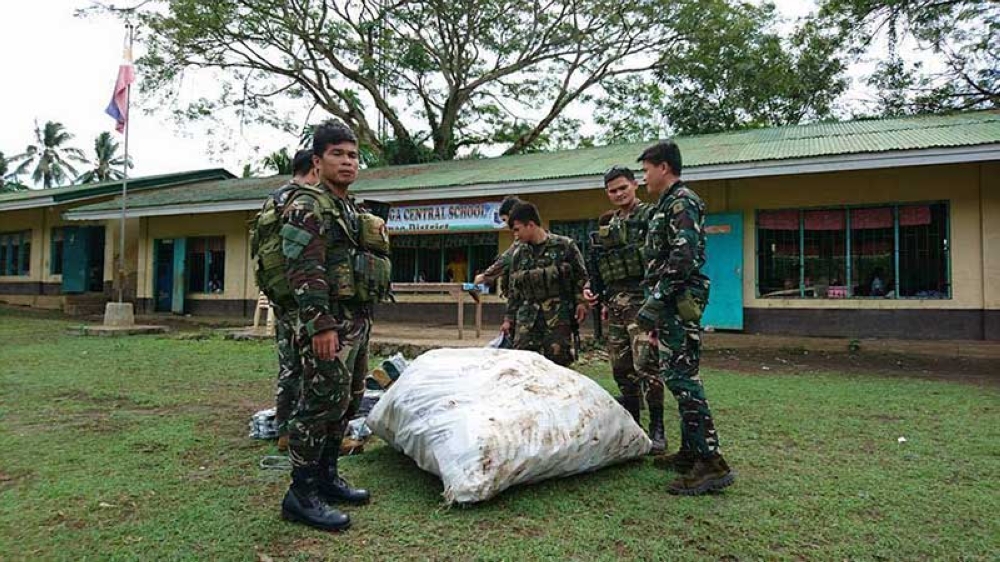 Soldiers deliver another sack of slippers for the children in poor communities. (Photo courtesy of "Tsinelas Para Sa Kapayapaan") 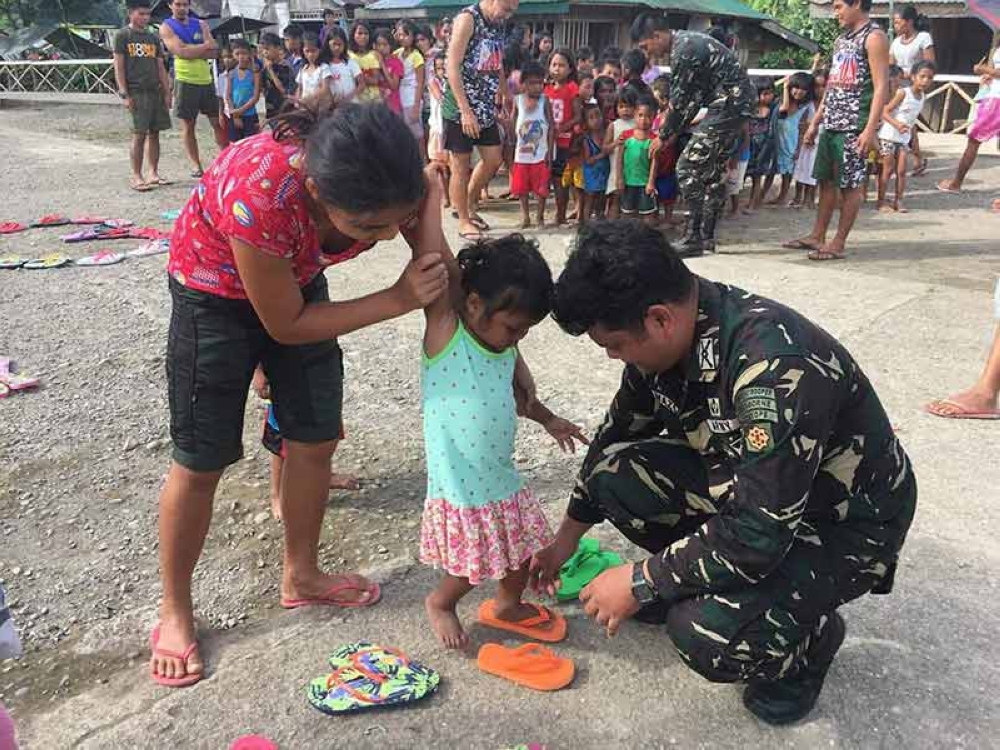 IT ALL started last November 8, 2016 when Army Major Arturo Dumalagan and his troops were ambushed by Abu Sayyaf terrorist group in Patikul, Sulu.

Since then, Dumalagan and his colleagues have embarked into a personal mission by giving slippers to children in the insurgency and poverty-stricken areas across the country to “win the hearts and minds” of the communities where ambush and landmine explosions frequently happened.

Dumalagan, along with Lieutenant Colonel Alexander Salgado of the 63rd Infantry (Innovator) Battalion of the 8th Infantry Division based in Samar, founded “The Tsinelas Para Sa Kapayapaan (Slippers for Peace)” project to inspire children in the poor and remote communities that they can rise above themselves and walk away from poverty and conflict-laden lives.

The Innovator Battalion is among the Army contingents sent to Sulu in 2016 to help destroy the Abu Sayyaf terrorist group.

“It’s not just purely giving away slippers. My mission is to inspire them, to motivate them that being poor is not a hindrance for having brighter future,” Dumalagan said.

“I’m a living proof that poverty is not a hindrance for our dream,” added the 43-year-old Army officer assigned at the Civil Military Operations Regiment.

He said their advocacy “goes no boundaries.”

“As long as our sponsors are able to provide, we can accommodate all who ask for their share. And of course, we prioritize the poorest of the poor school children in far-flung areas,” he added.

Dumalagan and his team have already reached their milestone by distributing over 5,000 slippers from Mindanao to Eastern Visayas.

“The more beneficiaries, the more we can encourage children to study hard for their future,” Dumalagan told SunStar in an interview.

While he could not regularly visit the remote communities anymore, Dumalagan relied on his team in the field to deliver the assistance they could get from various donors.

He said the success of their advocacy depends on the people who put their trust on them.

Aside from slippers, they are also giving shoes -- particularly for those who graduated with honors, books, and sports equipment for the out-of-school youths.

“At the end of the day, there are many of them who prosper because we give them hope. We inspire the poor children to be like others who excelled because they work for their dreams,” said Dumalagan, who also finished his studies as a working student.

“I grew up poor like them, wearing tattered slippers. But it does not stop me from reaching my dream,” said Dumalagan while expressing his gratitude to the Good Samaritans who came to his life and helped him succeed.

Dumalagan, the eldest among nine siblings to a family of farmers, finished his studies as working student from high school to college.

He said the hardship, emptiness, and kindness he received from strangers became his inspiration to work hard and finish his studies.

“Every time my mother would give birth to my siblings, I also stopped from my studies because I’ll be the one who would take care of them as my parents would then go back to their vegetable garden to earn a living,” said Dumalagan, recalling his difficult years before he finished elementary.

"Naalala ko pa na isang beses lang kami kumakain ng bigas; sa tanghali lang. May halong kamote pa, para dadami, at isang pirasong isda na hahatiin pa namin sa apat hanggang lima para lang magkasya (I remember, we only eat rice once a day, during lunchtime. It is mixed with sweet potato so it would be enough, and a fish is divided into four to five slices to fit)," he said.

Dumalagan and his parents had to walk 21 kilometers going to the town’s market to sell vegetables to support his studies.

In high school, he was lucky to have enrolled in night class after a local shoemaker employed him as a cobbler, where he also excelled in fixing shoes.

"With my desire to go to school, I tried to convince the owner to send me to night school in exchange for my salary," Dumalagan said.

He enrolled in a private Catholic school in their city and studied from 5 p.m. to 10 p.m.

Since he was already 15 years old at that time, a friend recommended him to take a placement test, which he passed. He was then promoted to fourth year and continued as a working student.

He remained thankful to the Alejandria family, who supported his night schooling until he finished it in 1994.

He also recalled how his mother got sick and he had nowhere to run for her medicine, but thanks to the kindness of strangers and "to the guidance of the Lord," he managed to find money and have her mother discharged from the hospital.

When it was time for him to go to college, he thought of going to Cebu to look for a job. But before the boat could leave the port, a friend came to him and told him of an opportunity to work at the bishop's residence in their place.

For four years, Dumalagan served the bishop as a working student, until he finished a degree in Commerce major in Management.

Dumalagan was a Reserved Officers Training Corps (ROTC) cadet officer in college, and this paved the way for him to join the Armed Forces of the Philippines. He started as an enlisted personnel before he became an officer. He has been in the military service for 17 years.

He was previously assigned in Bicol, Mindanao, and Samar prior to his promotion.

In 2017, he was selected as one the nominees for the prestigious annual Search for The Outstanding Philippine Soldiers (Tops) by Metrobank Foundation Inc.

In the same year, he received an award for their “Tsineles Para Sa Kapayapaan” advocacy during the Regional Youth Summit in Ormoc City.

“It is my satisfaction to see those children succeeded because of our inspiration,” he said.

Dumalagan also urged the local officials and educators to “reach out [to] those who are in the outskirts of the country to enjoy the privilege of free education,” saying “education is the solution for being poor.”

“Life doesn’t flow backward. Thus we must continue striving and following the course of life, with trust to ourselves, to other people, and to God,” he said. (SunStar Philippines)