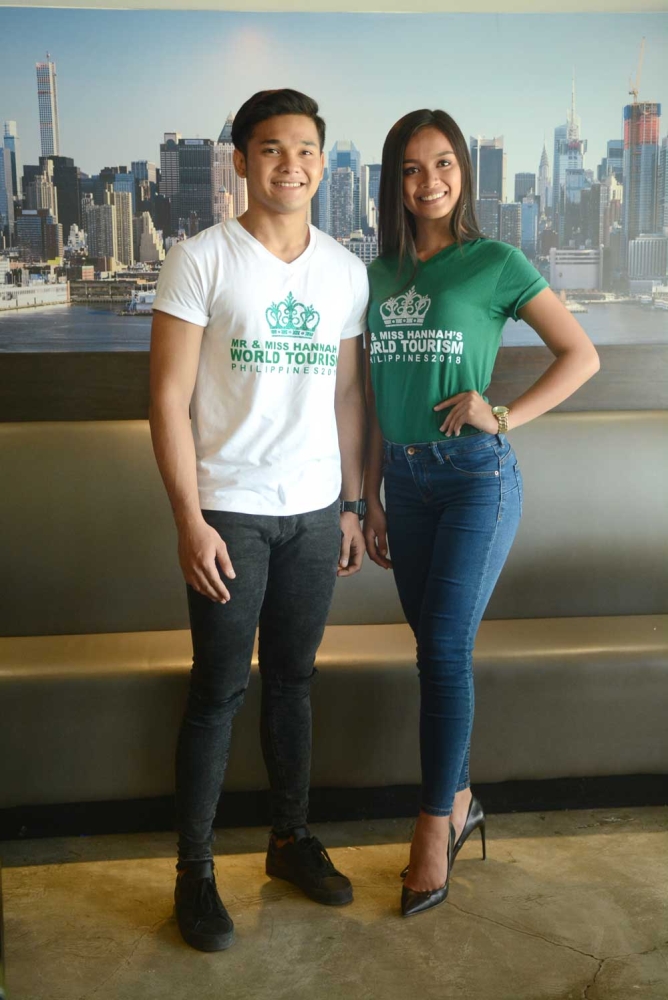 CEBU’S representatives to the Mr. and Ms. Hannah’s World Tourism 2018 have grand plans for Cebu.

Kylah Kristianne Yve Sanchez of Liloan and Kyle Dwight Sabinay of Talisay City met the press last April 27 at the Greenery’s Pen Bistroy. They made it to the Top 20 of their respective categories in the nationwide contest.

Sanchez clarified that she is not just joining a typical beauty pageant. It may be similar in terms of recognizing beauty, talent and intelligence, but Mr. and Ms. Hannah’s World Tourism has a vision of influencing people on the importance of environmental protection.

“We wanted to increase the growht of the economy of the Philippines by showing them that we are not just a wonderful place where there are more tourist spots, we have the people who are responsible and can take care of our environment,” said Sanchez.

Her advocacy is to promote environmental protection not just to the youth but to every Filipino who can hear her voice.

“I am planning to build a group in Liloan and I am hoping that it will become a reality,” said Sanchez. “It (will be) named Hakbang sa Kalikasan para sa Kinabukasan. I want to build a group wherein every weekend or on weekdays, we will always give time to walk in Liloan—every sitio and every barangay—to get some garbage or litter on the road and put it in the right bin. With that, we can build a platform to make people realize the importance of recycling and proper disposal of garbage, because if there is someone who will do it, people will be motivated to do it.”

Sanchez holds No. 4 in the Ms. Hannah’s World Tourism contest. She will compete with 19 other women from the different parts of the country.

Sanchez’s counterpart is famed for his appearance in “Pinoy Boyband Superstar.” He made it to the Top 10 finalists.

He said he is an advocate for sustainability of marine sanctuaries. He aims to propose to the local government to have projects that will encourage people to preserve nature. There should be strict implementation of policies, he said.

The 19-year-old said that his exposure in the boyband competition gives him an edge because of the people who supported him. Will he pursue his singing career after the contest?

“It depends on the available opportunity I can grab,” said Sabinay, who is also a model. “I can do both.”

“If you are a beauty queen, you have a bigger voice,” said Sanchez. “You have the stage, you have a very big platform, and you have a stage to influence people.”

Sabinay, who is No. 1 among 20 candidates, agreed. The pageant, he said, is a chance to share their respective advocacy, take experience as tools, and get feedback for improvement.

Winners of the Hannah’s World Tourism competition are assured slots in other prestigious national pageants: Bb. Pilipinas, Mutya ng Pilipinas, Miss Global and Miss Earth Philippines for the women. For the men, there is the Gentlemen of the Philippines.

But this is actually the first time that the competition went national. It used to be just a local pageant in Ilocos Norte.

It is a competitive pageant and the contestants are preparing themselves physically and mentally.

“The diet is tough and the training is very difficult,” said Sabinay. “I could say it’s not easy but we have the determination to represent what we need to represent.”

The 18-year-old volleyball varsity player said that her daily activities include working out for three hours and reading novels in order to expand her vocabulary for the pageant’s question-and-answer (Q&A) portion. She and Sabinay have Q&A sessions three times a week to prepare them for the contest.

Sabinay said he wakes up at 6 a.m. to do cardio workout and then goes to the gym at noon and works out for another three hours.

The competition labeled the contestants, aside from giving them numbers. Sanchez is #SportyGirl because of her affinity for sports. Aside from playing volleyball in school, she also loves skimboarding.

“There is a very big similarity when it comes to pageantry and sports because we, athletes, are trained to have the same qualities beauty queens possess,” said Sanchez. “We have patience, perseverance, dedication and determination. We are taught by our coaches to have a positive aura and I guess that that is what we need especially if you are a candidate of a national pageant. You need to cope with other candidates’ culture and knowledge.”

Sabinay is known as #TheSmile. Why? Because he’s got a great smile. Duh.

As a tourism ambassador of Cebu, Sabinay wants to highlight Magellan’s Cross because it represents the spirit of Cebu.

Sanchez also went the religious route despite not being a Catholic. She said that the Basílica Minore del Santo Niño de Cebu is the best representation of the Queen City of the South. Cebu is known as the birth place of Christianity in the Philippines.

On the issue of tourism spots in Cebu, Sabinay thinks there is a need to limit the tourists that go to Mactan.

According to the Department of Environment and Natural Resources, Mactan hotels and resorts are among those issued with notices of violation of the Clean Water Act.

Sanchez thinks this is a great opportunity to rehabilitate Mactan because locals could possibly lose their jobs if resorts in the area will be closed. But she believes the government will be able to provide employment to the people if they lose their jobs. A win-win solution should be on the table.

“If we are not responsible of taking care of our environment, then what is the use of having these tourist spots if we can’t sustain it well?” asked Sanchez.

The issue was raised following the closure of Boracay because of various environmental violations.

Tourism in Cebu is expected to increase, especially this summer, now that Boracay is no longer an option.

“Since Mactan is one of the tourist spots here in Cebu, for me, perhaps we should limit the number of tourists in Mactan until it heals its wounds,” said Sabinay.

Both hope that tourists would be eco-friendly and to enjoy their stay in Cebu.

“We should always respect the culture and tradition of other countries and we should learn to love people especially the tourists because they are one of the reasons why we are raising our economy,” said Sanchez.

They flew to Manila last Wednesday in preparation for the contest. There will be a preliminary pageant tonight at Hannah’s Beach Resort and Convention Center in Pagudpud, Ilocos Norte. The coronation night will be held at the New Performing Arts Theater in Resorts World Manila on May 12.