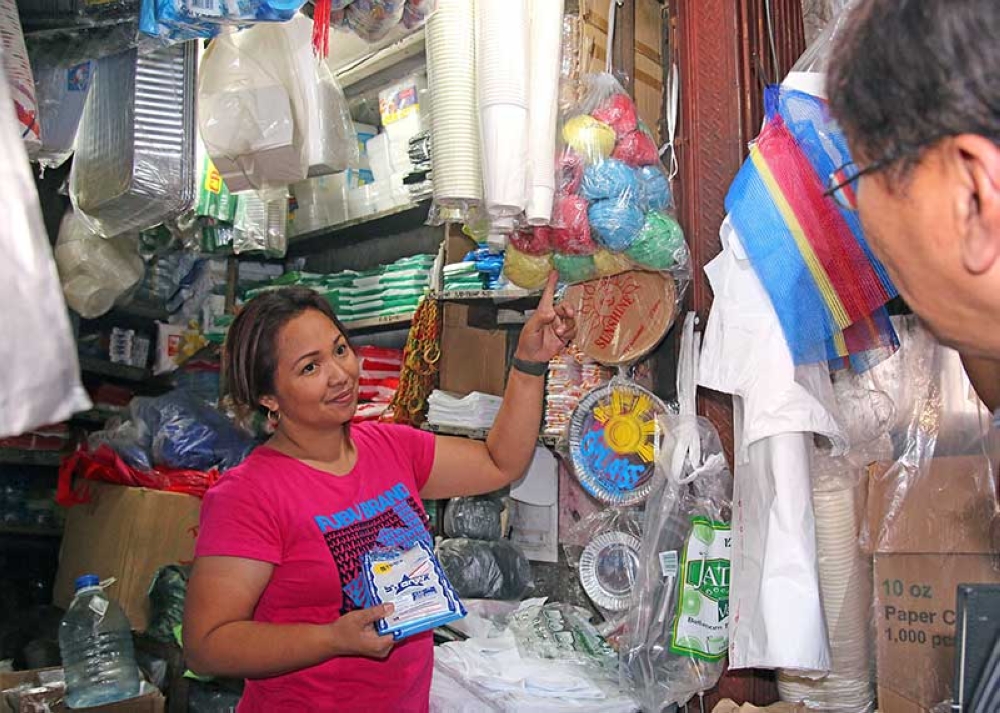 BAGUIO. A city official checks on a vendor at the city market while giving out further information prohibiting the use of plastic and styrofoam products in the Summer Capital. (Milo Brioso)

BUSINESS establishments in Baguio City were given stern warning by the city government following the full implementation of Ordinance 35-17 which bans the use of plastics and styrofoam.

During the weekly "Talakayan sa Environmental Code," representatives of the city council, City Environment and Parks Management Office (Cepmo) and the General Services Offices (GSO) reiterated the start of the "No Plastic and Styro" use ordinance.

"We have agreed with the Cepmo for both offices to come up with a forum for us to polish the implementing guidelines of the ordinance and at the same time, we will be involving all sectors of the technical working group to look on how the community would abide by the ordinance," GSO head Engineer Eugene Buyukan said.

On May 9, Cepmo and GSO will lead a write shop and solutions forum at the City Hall Multipurpose Area where all sectors are invited to the forum to gather possible proposals which will be included in the IRR.

Cepmo Representative Engineer Ruben Cervantes added once the IRR would have been finalized and implemented, the administrative order issued by the mayor will be overridden by the IRR.

“We are hoping once the IRR would be implemented by the Plastic and Styrofoam Free Baguio Task Force, no sectors would make complaints since the first year grace period given by the government to the community is just but right prior to its full implementation," Cervantes said.

The rules will define the roles of the various stakeholders and the parameters of the implementation based on the provisions of the ordinance.

Baguio City Councilor Mylen Yaranon who was present during the environment forum reiterated there will be no exemption from the implementation of the 'No to Plastic Use' ordinance.

"During our session last Monday, April 30, there were business establishments who were asking for exemptions since they were using were Oxo-biodegradable and Bioplastics. But majority of the council did not agree with their claim since these are still made from plastics," Yaranon explained.

Under the mayor’s administrative order, the use of Oxo-biodegradable or Bioplastics or vegetable-based plastic bags by some business establishments will not be allowed under the ordinance and its IRR unless certified by the Department of Science and Technology as to its degradation process.

"The administrative order which the council studied does not comply with the ordinance because biodegradable plastics are still plastics. There have been a scientific study like for example the salt which have been part of our food intake in the past years are made from micro plastics broken down into smaller fibers which is detrimental to our marine life and to our health, there are biodegradable bags made from vegetables and not plastics," Yaranon explained.