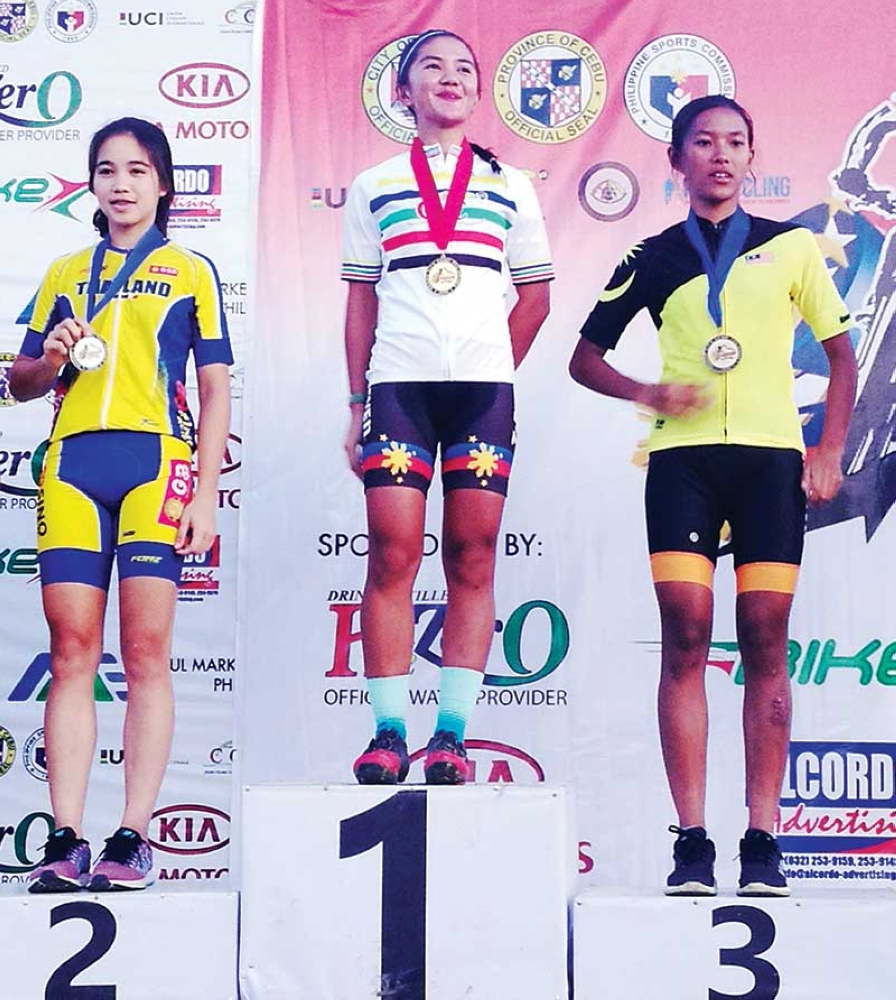 FOLLOWING an injury-riddled downhill competition the other day, Team Philippines finally found its rhythm and won a gold medal in the cross-country race of the 24th Asian Mountain Bike Continental Championships in Danao City.

Ariana Thea Patrice Dormitorio dominated the Women’s Under-23 contest with a time of 1:14:56. Thailand’s Natalie Panyawan was behind by six minutes and nine seconds and finished with a time of 1:21:06 for the silver medal. Malaysia’s Nur Deena Safia Nor Effandy settled for the bronze with a time of 1:28:10.

Though Dormitorio’s win was convincing, she admitted that she had some mishaps and could’ve had a better finish.

“I had a lot of crashes and I actually didn’t like my performance because I could have given more. But because of my casualties from going downhill and uphill, I had a bit of cramps in both of my legs. Also, in the parts that I had to push my bike, those were the times that the cramps would reappear. I could have had a better performance. Since we were racing along with women’s elite, my goal also was to catch up with the Women Elite,” the 21-year-old rider from Quezon City.

Dormitorio, who led all the way, pushed herself to the edge and finished at the top because of the steely resolve that her father instilled in her mind at a young age.

Dormitorio also won a bronze medal in the Team Relay event last Friday, which was won by China.

Meanwhile, China and Japan ruled the other categories yesterday.

China’s Li Hong Feng was way ahead of the pack and came in first in the women’s elite category. Another Chinese, Hang Migyan, finished second with a time of 1:34:13, while Iran’s Faranak Partoazar ended up at third place with 1:34:35.

Lyu Xianjing had a gold medal finish the men’s Under-23 division with a time of 1:08:59. His Chinese teammate Chen Mingrun nabbed the silver medal with a time of 1:12:16, while South Korea’s Kim Mino settled for a bronze with 1:14:53.

China’s Yuan Jin Wei only needed less than hour to cross the finish line and bagged the gold medal of the men’s Junior division. South Korea’s Chun Seong Hun won the silver medal with a time of 1:00:43, while Kazakhstan’s Niyazov Bolat settled for a bronze with 1:01:16

Japan’s Urara Kawaguchi finished first place in the Women Junior event with a time of 0:35:44, China’s Wu Zhifan was in second place with 0:37:08 and Japan’s Akari Kobayashi was in third with 0:38:31.