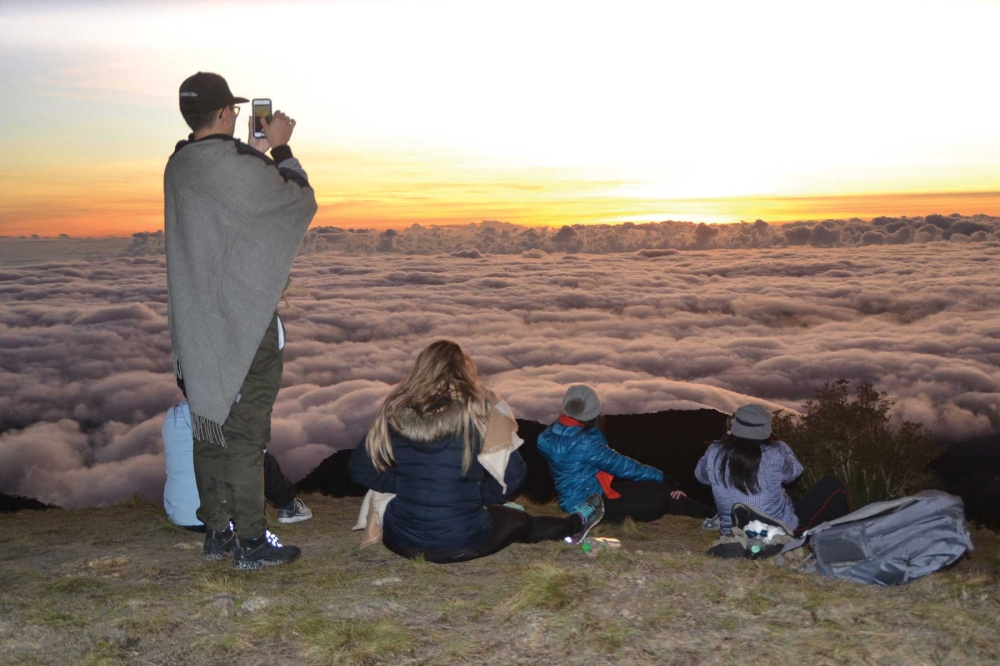 BAGUIO. Hikers view the sunrise and sea of clouds at the peak of Mt. Pulag, the highest mountain in Luzon. (Photo by Joseph Zambrano)

(UPDATED) - The Office of the Provincial Prosecutor has indicted Raymon Kristomar Mackay, a Cebuano hiker, for the destruction of a portion of Mt. Pulag National Park due to a grassfire sparked by a burning portable butane stove.

Mackay is facing charges of violation of Section 78 of Presidential Decree 705, or the Forestry Reform Code of the Philippines, while his six companions and their tour guide were cleared, according to the resolution issued by the Benguet Provincial Prosecutor on May 3, 2018. An information on the case was prepared on May 9, 2018.

The incident on January 20, 2018 burned about 23,600 hectares of grassland in Mount Pulag, destroyed around P2.36 million worth of forest, and compelled authorities to close the area to hikers for three months.

Section 78 of PD705, as amended, states that "any person who...negligently permits a fire to be set in any forest land or grazing land... shall, upon conviction, be fined in an amount of not less than P500 nor more than P20,000 and imprisoned for not less than six months nor more than two years for each such offense, and be liable to the payment to 10 times the rental fees and other charges which would have accrued has the occupational and use of the land been authorized under a license agreement, lease, license or permit."

Mackay and other members of a Cebu-based group of trekkers were preparing a meal at about 3 p.m. on January 20 when their portable butane gas burner flared up.

Mackay, afraid that the stove would explode, threw it away from their camp. The burning stove landed in the grassland and ignited the dry grass. The fire quickly spread, fanned by strong winds and dry foliage.

Other hikers with Mackay were identified as Juvelyn del Rey, a certain Aliño, a certain Formentra, a certain Buaya, Carlo Cabilao, and Lython Paul Coloqui Quiñones, all residents of Cebu.

In dropping other respondents from the case, the prosecution said "their acts may not be interpreted to have assisted or aided the respondent (Mackay)."

The resolution said Mackay is liable for negligence that caused the destruction of a portion of Mt. Pulag.

“The act of respondent Mackay in throwing the burning butane gas burner cannot be said to have been motivated by a deliberate and malicious intent to cause damage to the grassland,” the resolution stated.

“Although damage to the grassland resulted from the reckless act of respondents, the criminal act of arson cannot attach there being no evidence to established malicious intent on their part,” added the resolution.

The resolution, however, noted that the destruction of the dwarf bamboos could have been prevented "had they exercised due diligence in responding to the problem of the burning butane gas burner."

"As mountaineers, they should know that the grassland is prone to fire considering that it is dry season, and that since they were on a high elevation, the wind factor is high," the resolution further stated.

As per ground validation of the Provincial Environment and National Resources (Penro)-Benguet, the burned area contained an average of two bamboo clumps per square meter based on the sampling inventory made by the protected area staff of the national park.

The Department of Environmental and Natural Resources (DENR) procedural guidelines pursuant to the implementing rules and regulations of wildlife conservation and protection act lists the cost of wilding plant species such as dwarf bamboo at P50 per piece.

“The amount of damage thus per square meter is P100 multiplied by the area burned which is more or less 23,600 square meters, thus the amount of forest charges is P2.36 million without prejudice to the rehabilitation cost that shall be imposed,” said the resolution.

After three months of closure, the Akiki-Tawangan area was reopened to hikers and campers last month.