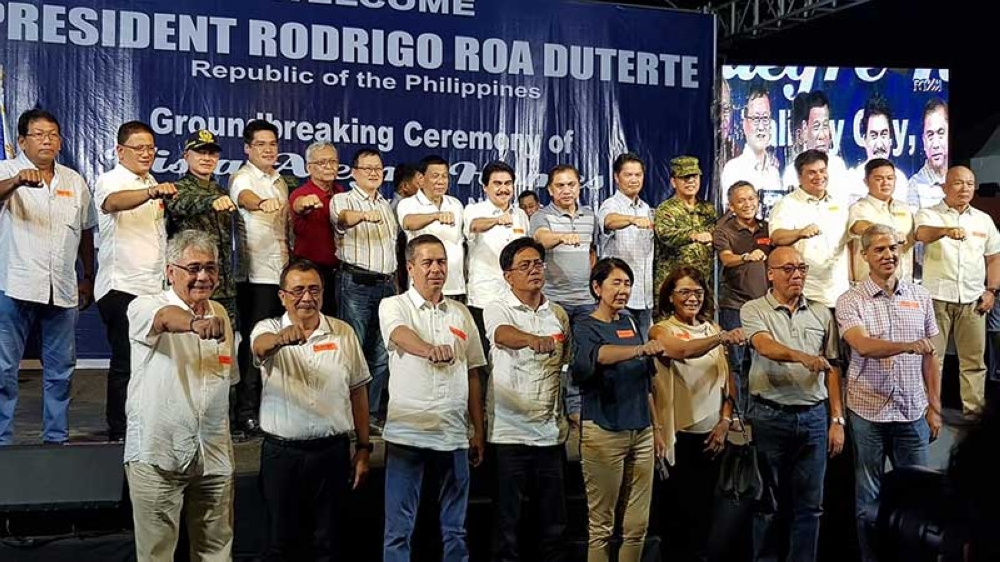 PRESIDENT Rodrigo Duterte led yesterday, May 20, the groundbreaking and laying of the time capsule of the P1 billion worth of housing project for the members of the Armed Forces of the Philippines (AFP) and the Philippine National Police (PNP) at Vista Alegre Homes in Barangay Dos Hermanas, Talisay City, Negros Occidental.

Duterte said 1,000 soldiers and police officers will have their homes under the project.

"To the brave men of the AFP and PNP, I assure you that this administration will remain resolute in promoting your welfare. We will continue to pursue our modernization program to further enhance your capabilities," Duterte said.

In his speech, the president emphasized that having a house that one can call his own is more than just an achievement that uplift the person's pride and moral. It is also an assurance of a stable life and a promising future especially to the children who will leave early.

"Today, we break ground on Vista Alegre Homes the housing project of the National Housing Authority (NHA) under the new AFP, PNP Housing Project Program. By 2020 this 15-hectare community will become the home of our 1,000 soldiers and police officers. These shelters are not just physical structures that will protect the beneficiaries from the outside world. These are homes where families can share memories, nurture values and hope for a brighter future for their loved ones. This is the commitment of the government to answer the housing needs of our people particularly those who risk their lives to save our country with utmost courage and integrity,” Duterte said.

The president also lauded the NHA for having the housing project.

"But you know, first things first, I would like the families of those who have fallen ahead of us, also be provided with housing projects. And with that also, I would like to declare my policy, of this government that I will pursue vis-à-vis with the housing and the houses also of those who would like to surrender. May this launching of this project inspire all of you to continue to advocate supporting government’s campaign and advocacies in uplifting the lives of our citizens and creating a safer and more secure nation for all Filipinos," Duterte said.

NHA General Manager Marcelino Escalada, for his part, said that the project is a humble token to the personnel of the PNP and AFP.

"I just got an instruction of the president that of the total price that you will pay for the package of this project, in the private this is P1.7 million to P2 million, but in NHA this is priced from P800,000 to P1 million. By virtue of the instruction of the president, all beneficiaries will have a discount of P100,000 for a free charge to the Office of the President as his contribution to the people of the country who fought and defended the nation," Escalada said.

The groundbreaking yesterday was the fifth project in the country. NHA started it in Lanao then Davao, Tarlac and in San Miguel, Bulacan.

Escalada said they will require their partner to finish this in two years time. "We will have the turnover on December 2018 the earliest, or March 2019."

"We are asking the boards of the PNP and AFP and the NHA regional office here to initially and start already the application. Right now there are a lot of applicants already,” he said.

“There are no requirements in the year of services as long as you are an active PNP and AFP personnel. They just have to apply," he added.

The 10 percent will be allocated to Bureau of Jail Management and Penology, Bureau of Corrections and the Bureau of Fire Protection.

"Because of limited units of 1,000 only, this housing project will be in a first come, first serve basis and there are a number of AFP and PNP personnel in the province. So those who are interested may do apply now. They can only pay the monthly amortization of P4,900 to P5,100 and it can be through Pag-ibig,” he added.

"Under the Duterte administration, we can assure you that the design is of high quality and even in the construction methodology. The policy now is we go back to the convention because nothing beats the conventional of concrete hollow blocks," Escalada stressed.