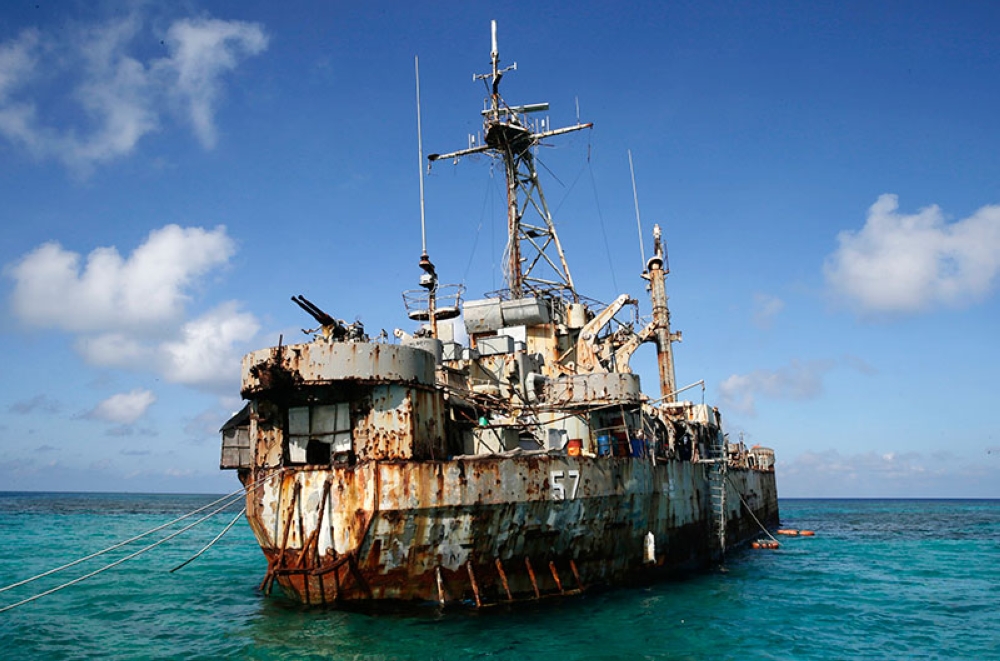 MANILA. In this March 30, 2014 file photo, the dilapidated Philippine Navy ship LT 57 Sierra Madre is in the shallow waters of Second Thomas Shoal in the South China Sea. Officials say the Philippine government has quietly protested after Chinese ships deployed a helicopter that flew close to a Philippine navy boat carrying supplies to Filipino marines at a disputed shoal this month. (AP)

FOREIGN Affairs Secretary Alan Peter Cayetano on Wednesday, May 30, assured members of the House of Representatives that the administration is protecting the country's territory and sovereignty amid the series of reports on China' supposed militarization in the West Philippine Sea.

During the briefing by the Task Force for the West Philippine Sea on Wednesday at the House of Representatives, Cayetano said the administration has filed numerous diplomatic protests against China.

He was reacting to the comment of Magdalo Representative Gary Alejano urging him to assert the country's rights over the West Philippine Sea, saying that the Philippine Coast Guard, the Philippine Navy and even the fishermen are being harassed by the Chinese government.

"As a sovereign country, no matter how small we are, we should assert that (our sovereignty) ," Alejano said.

"I have been talking to our fishermen. Pag nangisda sila doon yung magandang huli iniinspect, kinukuha... Last May 11 hindi ba hinarass ang ating sundalo, not only of the Coast Guard but of the Philippine Navy. We want to be friends with them but don't harass us," Alejano added.

Alejano pointed out that the Filipinos should be informed of what is happening in the WPS, as the current issues on the WPS are of public concern.

Cayetano said the administration has been addressing the issues mentioned by Alejano quietly.

"We are not asking you to trust us blindly. We have been filing diplomatic protests but our critics want us to shout loudly," Cayetano said.

He added: "We're not saying it's perfect. But we are not doing it like the (former President Benigno) Aquino or (Acting Associate Justice Antonio) Carpio way na through media at sigawan. We are doing it through diplomacy," Cayetano added.

Further asked by another lawmaker, ACT Teachers Rep. France Castro, how can the country be on a par with China Cayetano said: "sa lengwahe ng basketball — puso."

In the same briefing, National Security Adviser Hermogenes Esperon Jr., chairman of the Task Force on West Philippine Sea, appealed to Congress to give the Armed Forces of the Philippines a budget of at least P30 billion for its modernization.

"We are not saying we should beef up our defenses to prepare for war but it is incumbent upon a nation to strengthen its defenses," Esperon said.

Because of the low budget for the modernization of the military the country cannot resort to the use of arms but use instead diplomatic, economic or legal actions, said Esperon.

"I don't want to blame Congress, you must have your own reasons for not giving us P30 billion annually. Babalik kami sa Congress; we have now our second modernization program," Esperon said noting that the 25 billion modernization fund is not enough to buy one submarine.