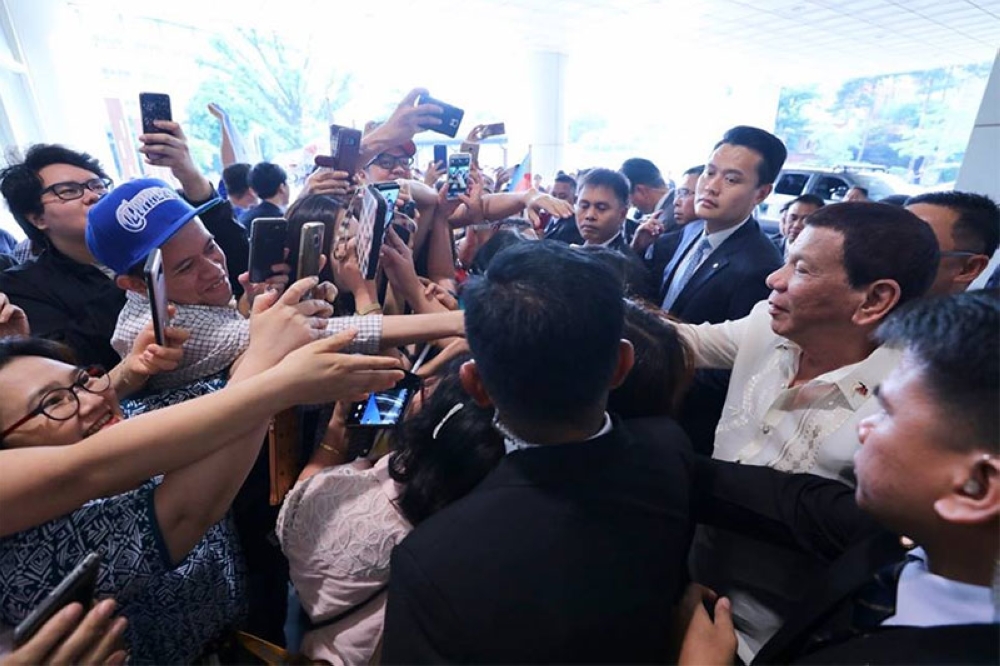 PRESIDENT Rodrigo Duterte on Tuesday, June 6, justified his controversial kiss on the lips with a married Filipino woman, dismissing it as "pure showbiz" intended to entertain his supporters in Seoul, South Korea.

Duterte, who has reaped criticisms over his supposedly inappropriate behavior toward women, said there was nothing wrong with his "style" to ask a woman for a kiss in front of a large audience in Seoul.

He even bragged that the woman he kissed, identified as Bea Kim, as well as his Filipino supporters "enjoyed" the "simple" kiss.

"About the kissing? We enjoyed it. It was a showbiz and everybody enjoyed," Duterte told reporters in Manila upon his arrival from a three-day official visit to South Korea.

"There is nothing wrong in a simple kiss... I never felt any sensation, if that's what you mean. I can only generate an emotion if I kiss a woman I love. Any other stranger is pure showbiz," he added.

In a meeting with Filipino community in Seoul on Sunday, June 3, Duterte stirred controversy after asking Kim to kiss him, in exchange for a book titled "Altar of Secrets," which contains exposés about Catholic Church leaders' alleged wrongdoings.

Kim, a Filipino woman married to a South Korean national, defended Duterte on the sidelines of the event, telling state-run Philippine News Agency that there was "no malice" in the President's request to give her a smack on the lips.

On Monday, June 4, women's rights group Gabriela slammed the "misogynist" President over his "disgusting theatrics" to "demean, humiliate, or disrespect women according to his whim."

Presidential Spokesperson Harry Roque Jr. said Monday, June 5, that there was "no offended party" since Kim was even "honored with the kiss."

Duterte merely shrugged off the criticisms, saying those who condemned him for his recent gesture was merely "envious."

He also stressed that the controversial kiss was not new to him, since he had already done such act in the past during his mayorship and even the presidential campaign.

"They are just envious. A smack? You know, I'll tell you what. There are people here from Davao. During the campaign and my mayorship days, I kissed every woman there, lips to lips," Duterte said, drawing laughter from the crowd.

"They want not just smack. Some of the women even want romance. That's my style," he added.

Duterte, whose current partner is Cielito Avanceña, also made headlines in February 2016 for kissing his two female supporters in a political sortie in San Fernando, Pampanga.

Nevertheless, it was the first time Duterte, as the highest elected official in the land, requested a woman to kiss him on the lips. (SunStar Philippines)