DILG recommends filing of cases vs 32 on NCCC fire 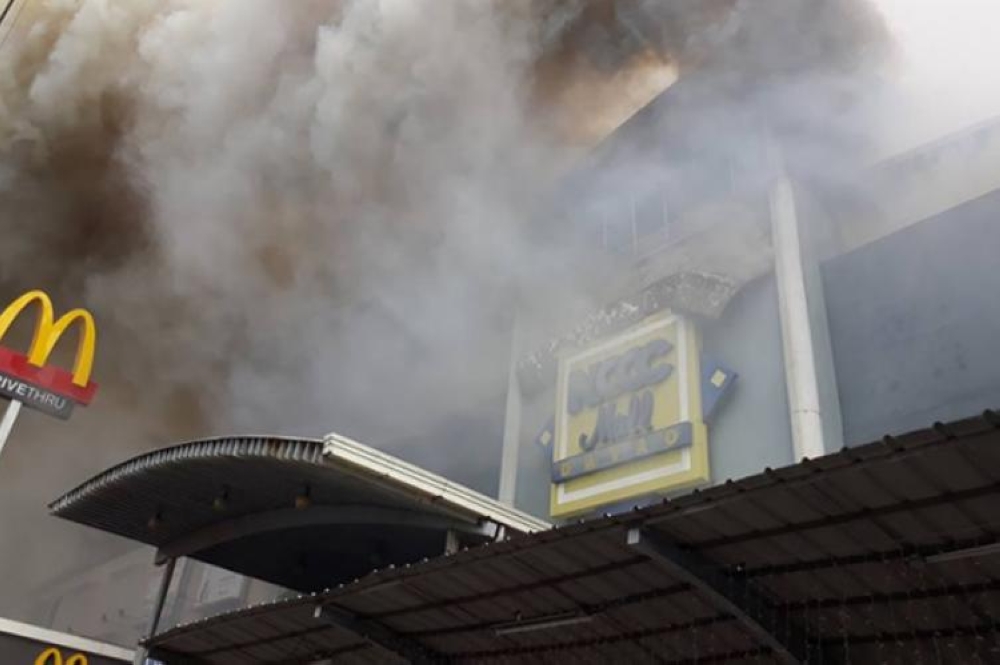 THE Department of the Interior and Local Government (DILG) recommended the filing of appropriate criminal and administrative charges against 32 mall and government officials for the fire that razed NCCC Mall in Maa and claimed 38 lives.

The charges will be filed against the NCCC management, fire officials, city building officials, and personnel of the Philippine Economic Zone Authority (Peza).

Undersecretary Eduardo Año, DILG officer-in-charge (OIC) during a press conference Friday, June 8, at SMX Convention Center, SM Lanang Premier, said they have already submitted the result of the final investigation of the Interagency Anti-Arson Task Force (IATF) before the Department of Justice (DOJ) last March 9 and they are just waiting for the preliminary investigation.

“DOJ handles the cases all over the country so siguro sa dami ng cases medyo mabagal ang proseso. The purpose of this press conference also is to remind the DOJ [that] we need to answer the clamor of the public to give justice to the 38 victims,” Año said.

Another case for violation of Section 3(e) of RA 3019 for causing undue injury to a party, including the government, or giving any private party unwarranted benefits, advantage or preference in the discharge of official administrative function through manifest partiality evident bad faith or gross inexcusable negligence were former Davao City Building Official Joaquin B. Cui, Jr. and Peza Mactan officials Sansaluna A. Pinagayao, Darlyn Nazareno and Nicasio G. Mamites.

Año said that these officials were already relieved from their post during the pendency of the case.

Likewise, a violation of Paragraph 2(b) in relation to Para 2(a)(3), Section 11 of RA 9514 was also recommended for endorsing to the Fire Marshal concerned for the certification, submitting a report that the building or structure complies with the standards set by the Fore Code, its implementing rules and regulations, other pertinent laws when the same is contrary to the fact against BFP Davao Officers and Personnel including Calvario, Baja, Quismundo, Dumag, and Lauzon and also from Peza is Arvin Tero.

Quismondo, Lauzon, and Tero will also be facing charges for violation of Paragraph 4, Article 171 of the Revised Penal Code amended for falsification by Public Officer a document and making untruthful statements in a narration of facts.

Aside from the criminal charges, the DILG also recommended the filing of administrative charges for grave misconduct against former Davao Building official Cui and Peza Mactan Economic Zone officials Pinagyao, Nazareno and Mamites.

All the seven officials of BFP Davao Fire District were also recommended to face administrative charges.

For Grave Misconduct in relation to violation committed under Section 3(e) of RA 3019; Section 11(2) of RA 9516, paragraph 4 of the RPC as amended, Gross Neglect of Duty, Falsification of official document and gross dishonesty under the CSC Law and/or ombudsman Act are Tero, SFO2 Joel Quismundo and SFO2 Lauzon.

Less grave misconduct for simple misconduct under CSC Law at Section 11(2)(a)(8) of RA 9514 were recommended to be filed against former Davao Fire District Fire Marshals Superintendent Honee Fritz A. Alagano and Chief Inspector Edgar Tanawan.

Meanwhile, Año said there were several violations that were noted during the duration of the investigation of the IATF Fire Safety Technical Group. Had it been addressed and fire safety requirements of the fire code were properly complied, the incident would not have happened.

The violations that were observed were the sprinkler system at the fourth floor occupied by SSI was not functional; insufficient means of egress for the 4th floor where SSI holds office; travel distance the maximum distance imitation; some exit door has no self-closing device; some stairs were not fully enclosed; and the ground stair landing of one exit was utilized as storage.

Also cited were the failure to notify nearest fire station when the fire alarm system and sprinkler system were out of service for more than four hours; dry standpipe were not installed at the exits; and proper raceways were not provided on the electrical wirings installed at the renovated portion of the third floor.

Despite these violations, the designated fire safety inspectors failed to indicate the correct fire safety status or violations of the building and still gave the NCCC management the Fire Safety Inspection Certificate.

Meanwhile, DILG issued a memorandum to the BFP and all LGUs to reinforce the requirement and indispensability of an FSEC and FSIC; strengthening the profiling of all establishments and the designation of official records custodian of fire safety related documents in all fire station and providing penal provision for any violation; assessment on the capability of BFP Fire Safety Enforcers through examination to ensure their efficiency and enhancement of BFP firefighters on fire suppression and rescue operation involving indoor or confined spaces fire incident.

Año said that they recommended to investigate the possible negligence in the custody of the official document by some Davao City Fire District personnel and intensive and sustained inspection and risk assessments of all high establishments to ensure compliance with the Fire Code.