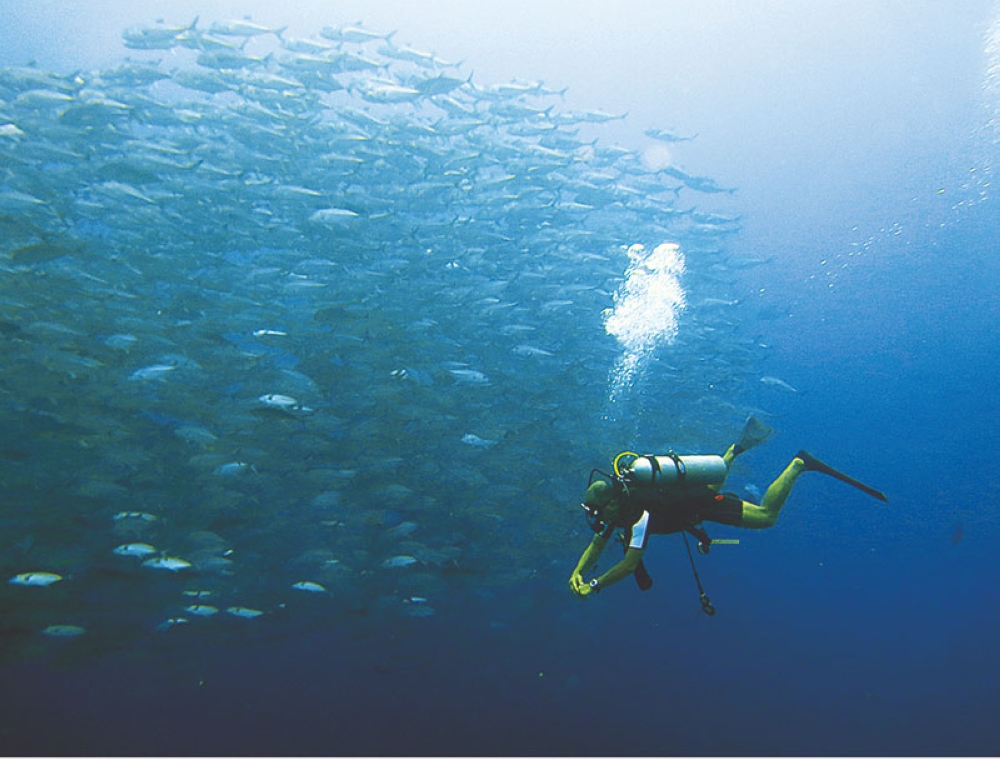 LUSH. A diver is dwarfed by a school of jacks off Apo Island off the southeastern tip of Negros Island. (Stella A. Estremera) 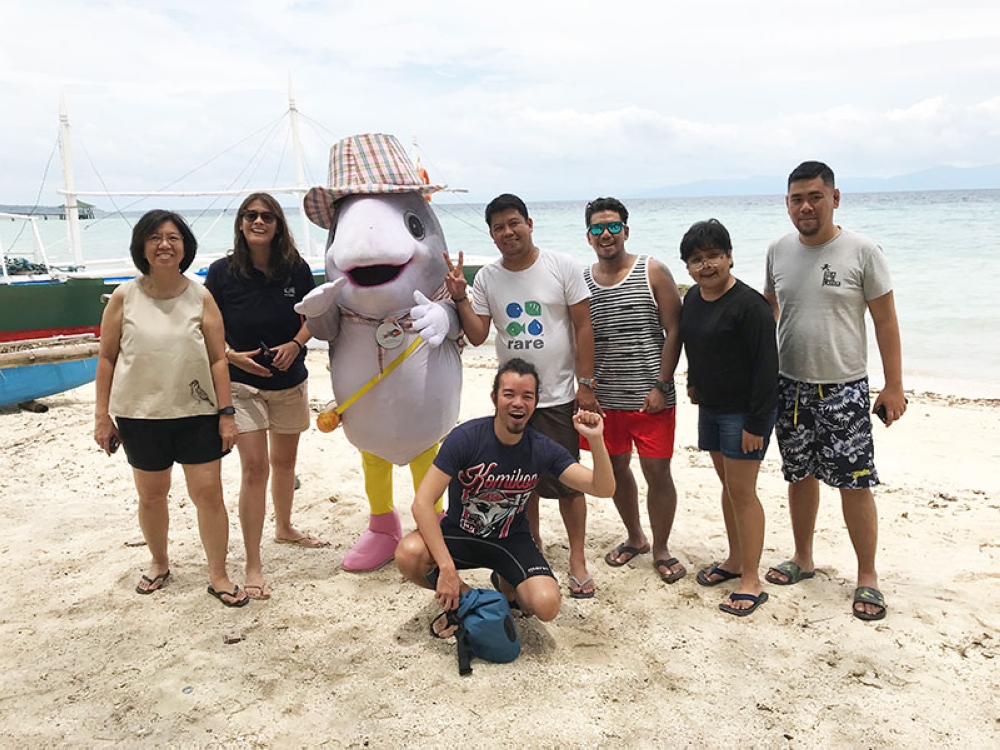 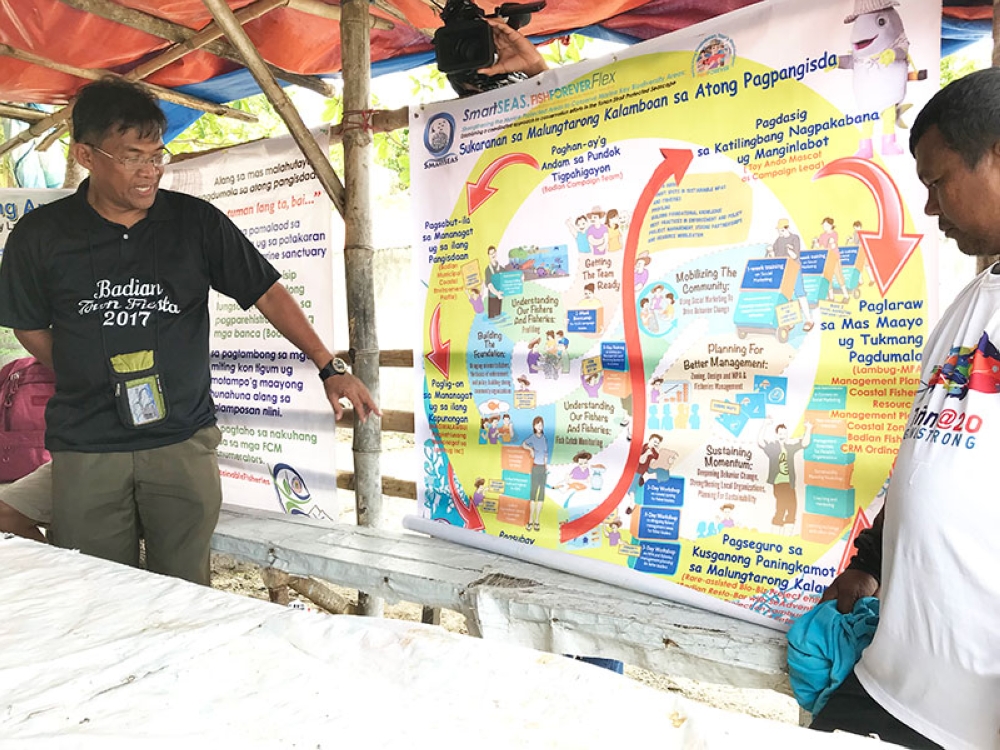 AT THE HELM. Benito Secuya Jr., municipal agriculturist and Badian Campaign Team Leader for Sustainable Fisheries, explains the track they are following in managing access to their marine resources. (Stella A. Estremera) 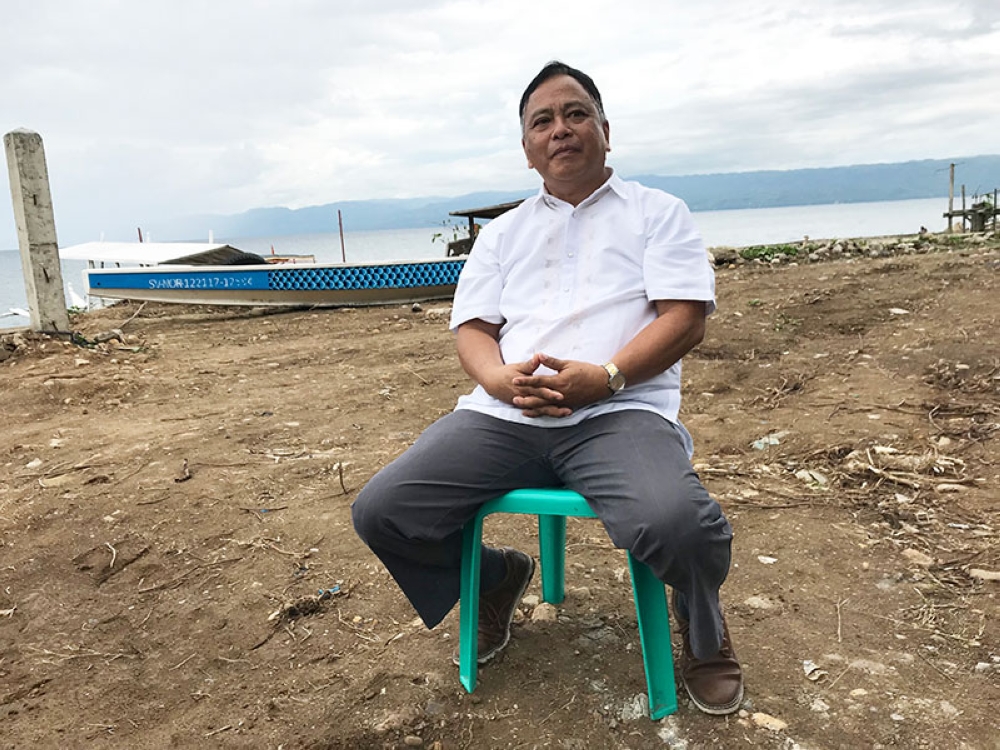 IT'S a never-ending quandary of fast-depleting fish stocks in the wild. Match this with climate change and illegal, unreported and unregulated fishing (IUU) amid a population that is almost always among the poorest, then you have the perfect recipe for destitution, which in turn breeds more destitution.

Roquelito Mancao, Director for Technical Operations of Rare Philippines, describes overfishing as a Wicked problem, defined as a problem that is difficult or impossible to solve because of incomplete, contradictory, and changing requirements that are often difficult to recognize.

"It's a very complicated problem with many unknowns, like meron ngang catch quota pero wala namang nakakaalam kung ilan talagang isda ang nasa dagat (while authorities may set catch quota, no one really knows how much fish is there in the sea)," he said as an example of how complicated the problem is.

Among the results is the tragedy of commons where each individual fisher acts for his own self-interest, detrimental to others and the whole environment.

"Yung kukunin lahat at baka makuha ng iba or hindi ko na makikita ulit ang mga ito (The inclination to take all or else others might get them or I will never see them again)," Mancao said in a briefing with a group of writers and an artist in Dumaguete for a tour of various Rare Philippines project sites and learning from fisherfolk communities.

This is where Rare Philippines' Fish Forever program comes in. Rare is an international non-government organization that uses “behavior change to achieve long-lasting conservation results.”

Building from the past

Fish Forever looks at the sector that is both a source of and a key to the problem: the fishers, and sees them as the force that can change the tide of depletion.

It also builds on the programs of the past to strengthen these and bring these back to the fishing communities who will ultimately be the ones capable of keeping close watch over their municipal waters and manage access to these resources.

In the 1970s until the 1980s, the thrust was regulation of coastal resources where community-based resource management models where developed.

Rare entered the scene in 2010, looking into behavioral change to tap the power of the commons.

They have a model to look up to: Apo Island, even kilometers off the southeastern tip of Negros Island.

"Apo is not really our project area, but we look at it as a model on managed access," said Yasmin Arquiza, Rare Senior Manager, Communications and Events.

It's not perfect, but the community has been managing its own since it was declared as the Apo Island Protected Seascape and Landscape in 1994 and they have kept their waters as among the most sought-after dive and snorkeling destination for turtles and jacks and gardens of lush corals, recovering even after the devastation of typhoons Sendong and Pablo that destroyed their reefs.

The turtles that reside near the shore have become a tourist draw and just the earnings as guide is already providing ample livelihood for the locally trained dive masters and dive guides and gear rentals. Women earn from catering and selling souvenirs. The people of Apo only fish during low season and only for sustenance using hook and line.

The Protected Area Management Bureau of the Department of Environment and Natural Resources also regulates settlers, and only those who are from Apo can live in Apo.

During peak season, Apo hosts upto 200 snorkelers and 100 divers a day. Visitors are allowed to snorkel at the turtle area for 15-20 minutes only to give way to others. All these are led by a local guide at four persons per guide, who is tasked to ensure that the snorkelers and divers do not disturb the turtles, said Welmer Pascobello, a local dive master.

In the drawing board is the study to determine how many people can Apo sustainably host, enough to provide for its people and to maintain the environment.

Tanon Strait and the 42 LGUs

It's more difficult in the project sites of Rare covering areas along Tanon Strait as it is the biggest protected seascape in the country straddling 42 local government units with varying levels of environmental awareness and concern or lack of concern.

Still fishers and officials have their success stories to tell. Baby steps that encourage them to go on.

The town of Amlan in Negros Oriental, for one, is upbeat in enforcing fisheries laws and apprehending commercial fishers and their equipment. Commercial fishing is prohibited in Tanon Strait, first because it's a protected seascape, and second because between the island of Cebu and Negros, the municipal waters overlap, meaning, there is no room for commercial fishers. Under the Fisheries Code of the Philippines, 15 kilometers from the shoreline is classified as municipal waters. At its narrowest, it is but three kilometers wide, while at its widest it is 27 kilometers.

"There was a mayor in the south who owned fishing vessels, we apprehended his fishing vessels, he tried calling me, but I said, he will have to pay the fines. Multa lang, tutal marami kang pera," he said.

Consistent apprehension has sent the message that they are serious in their drive against commercial fishing, except that, they are just one of 42 LGUs and there's a bigger politician who is also into commercial fishing in Tanon Strait.

While there is still a lot to be done in the 19 sites covered by Rare in the whole country (Luzon, 7 sites; Visayas, 7 sites; Mindanao, 5 sites), there are already initial success that includes the organization of more than 70 savings clubs in seven sites of which 80% of the members are women, of which US$100k deposits were mobilized for children’s education, health emergencies, and small businesses. Connecting responsibly caught seafood to premium markets also caused 100-300% increase in earnings for the fisherfolk, among many others.

Bottomline, the battle is for changing mindsets and make productive citizens of fishers aware of their responsibilities over the resources that provide them livelihood and food, and not impoverished bottom scrapers.

Complementing this, Mancao hopes, is a real convergence of government agency initiatives to help the subsistence fishers and the environment.

"Like doon pa lang sa pangalan na marine sanctuary and marine protected area, kita na na may disconnect," he said. Marine sanctuary is preferred by the Department of Agriculture while MPA is a term used by the DENR.

If only government can get its acts together, including the LGU executives, who still choose to break the fisheries law because only small fishers are enforcing them.