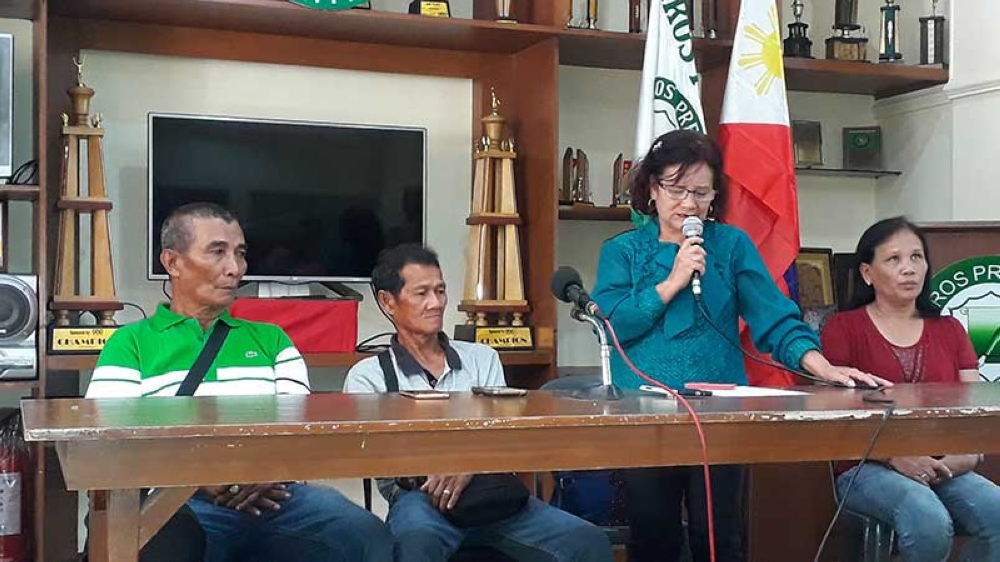 BACOLOD. Ma. Fe Tanallon (second from right) with other claimants and martial law victims in Negros Occidental air concerns on alleged extortion against a lawyer in a press conference at the Negros Press Club in Bacolod City yesterday, June 10. (Erwin P. Nicavera)

AT LEAST 40 claimants in Negros Occidental, mostly victims of martial law, have aired concerns over the alleged extortion of a lawyer whom they tapped for notary services as part of the requirements to process their monetary reparation at the Human Rights Victims' Claims Board (HRVCB).

Copies of the joint statement signed by them were distributed to the media in a press conference at the Negros Press Club Building in Bacolod City yesterday, June 10.

A portion of which stated "gusto namon ipabalo sa publiko nga asta subong ginapahog kami, kag napilitan ang pila sa amon maghatag kwarta bangud ginabalik-balikan kami sa bukid sang mga nagapakilala nga ginsugo ni Atty. Rey Gorgonio (we would like to inform the public that until now we are being threatened and some of us were obliged to pay because some individuals presenting themselves as a staff of Lawyer Rey Gorgonio keep on going back in our place at the mountain)."

It added that "wala man kami may ginpirmahan kay Atty. Rey Gorgonio nga may obligasyon kami sa iya kun marelesan kami kay nakabayad naman kami sa iya pagnotaryo sang naga proseso pa lang kami (we have not signed anything with Gorgonio stating that we have an obligation to pay him once we get our claims and since we already paid him for notary services)."

The claimants also showed individual copies of demand letters from Gorgonio asking them to pay the lawyer 20 percent of the claims they will receive as attorney's fee.

One letter dated May 30, 2018 addressed to Emelita Rivera, a claimant from Bago City, stated that she already received her monetary reparation worth P1.7 million under the Human Rights Victims Reparation and Recognition Act of 2014.

The lawyer is demanding Rivera to pay him 20 percent of the claims in 10 days upon the receipt of the letter or else he will file appropriate charges in court, it said.

There are different signatures affixed in the letters. Some of the documents were only signed "by" in behalf of Gorgonio.

Ma. Fe Tanallon, claimant from Barangay San Jose in Binalbagan town, emotionally recalled the human rights violation suffered by her husband Fernando, who was tortured and beheaded during the martial law.

Tanallon said they received P1.7 million monetary reparation last May 18, and that Gorgonio personally told her "ayo ka lang" referring to the 20 percent share being asked by the lawyer.

The 62-year-old widow also claimed that a group of "armed" men on board a black Toyota Hilux went to their house twice and threatened her husband and children.

"Hambalan nila mga bata ko nga diin ang iloy niyo, tapos gid na siya," she said, adding that they are also planning to file extortion charges against the lawyer and will inform the HRVCB about this.

All other claimants coming from different localities in the province present during the press conference aired the same "extortion" concerns against Gorgonio.

They said they availed the notary services of Gorgonio through a certain "Lily Limaco" who already died sometime in 2014.

"We were victims of martial law, now we are being victimized again," they lamented.

In a statement sent by Gorgonio to the media yesterday, the lawyer said he already filed civil cases against the claimants.

Gorgonio said he rendered legal services that resulted to millions of pesos awarded to the claimants but the latter escaped from their legal responsibility.

"Subsequently, demand letters were sent for them to comply with their legal obligation to me," he confirmed, adding that cases filed so let the court decide.