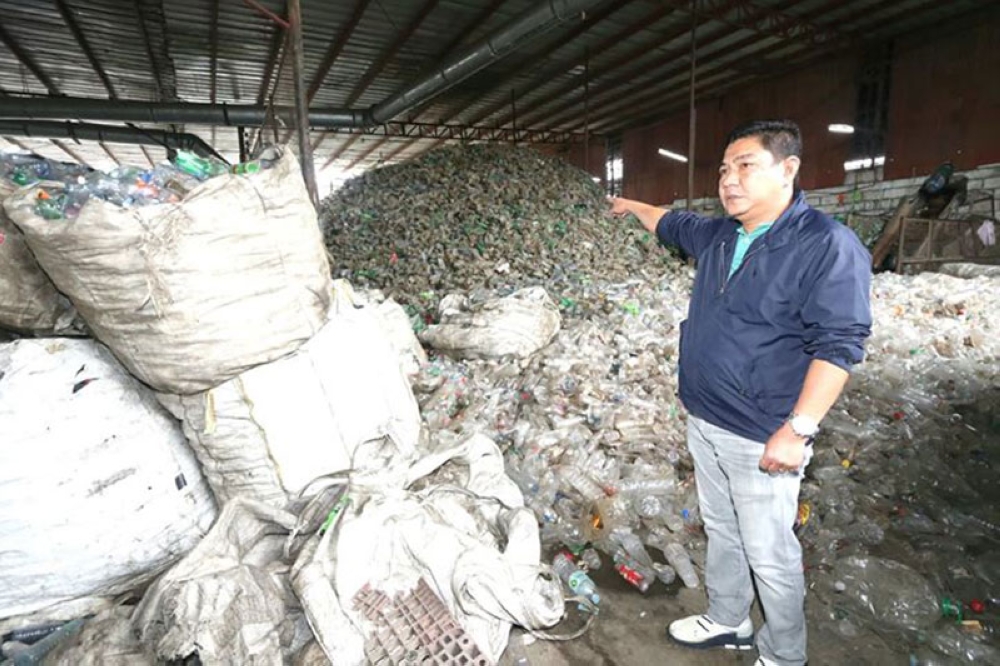 PAMPANGA. Sto.Tomas Mayor John Sambo points to a pile of plastic at the MMK recycling plant in Barangay San Matias which was closed by the local government, BFP and PNP on Thursday for alleged violations and operating without a business permit. (Chris Navarro)

STO. TOMAS -- A plastic recycling plant operating along Barangay San Matias here was shut down by the local government for alleged multiple violations in the town’s updated revenue code.

Mayor Johnny Sambo of this town led the serving of the cease and desist and closure order to the owner of MMK Plastic Grinding, which is allegedly operating without the necessary permits and documents from the local government.

According to Sambo, MMK Plastic Grinding violated Municipal Order No. 3-13 or the town’s Updated Revenue Code for continuously operating without a mayor’s permit, sanitary permit and permits from the Department of Environment and Natural Resources.

“Since I assumed the mayoralty post in 2016, MMK Plastic Grinding was not given a business permit. Our sanitary personnel and Bureau of Fire came here to instruct them of their obligations but they were not complying that is why we reached this point of serving the cease and desist order,” Sambo said.

He also said that residents of Barangay San Matias have aired their complaints through a letter on the alleged toxic waste water unsystematically released by the factory to the village’s drainages.

The residents, through their letter sent to Sambo’s office, claimed that MMK Plastic Grinding also allegedly violated the town’s proper zoning assignment as it is located in the midst of a residential area surrounded by three private subdivisions and several houses along D.P. Canlas Street here.

“The problem with MMK Plastic Grinding is that it discharges toxic waste water in the newly-constructed drainages in our community, and has been treating our place as their own dumpsite. We have long been suffering from this catastrophic water pollution and is continuously thriving at the misery of our lives for our health is in deep danger,” the letter signed by at least 30 complainants read.

With this, Sambo together with the local police and firemen immediately padlocked the establishment and told the plant manager to clear the area within a week before they can apply for the necessary permits.

“This will be closed until they secure the necessary permit and ensure that they will have the proper facilities, particularly for water treatment that would resolve to the sentiments of our people in Barangay San Matias,” Sambo asserted.

An employee of the MMK Plastic Grinding who asked for anonymity said that at least 55 families will be displaced from the sudden closure of factory.

The employee, who is allegedly with MMK Plastic Grinding for about four years, said that most of them are from Bulacan and Bicol provinces and only a few, if none, are from Sto. Tomas town.

When asked about the nature of their job, the employee said they grind and cut plastic items likebottles into strips, and deliver them to a plastic smelting plant in Meycauayan in Bulacan province.

The manager and co-owner of MMK Plastic Grinding, who identified himself as Marlon Chu Cayabyab, claimed that the factory stopped its operations in 2017 in preparation for its renaming.

He did not provide any other information but vowed to comply with the local government’s order, requirements and further instruction from authorities.