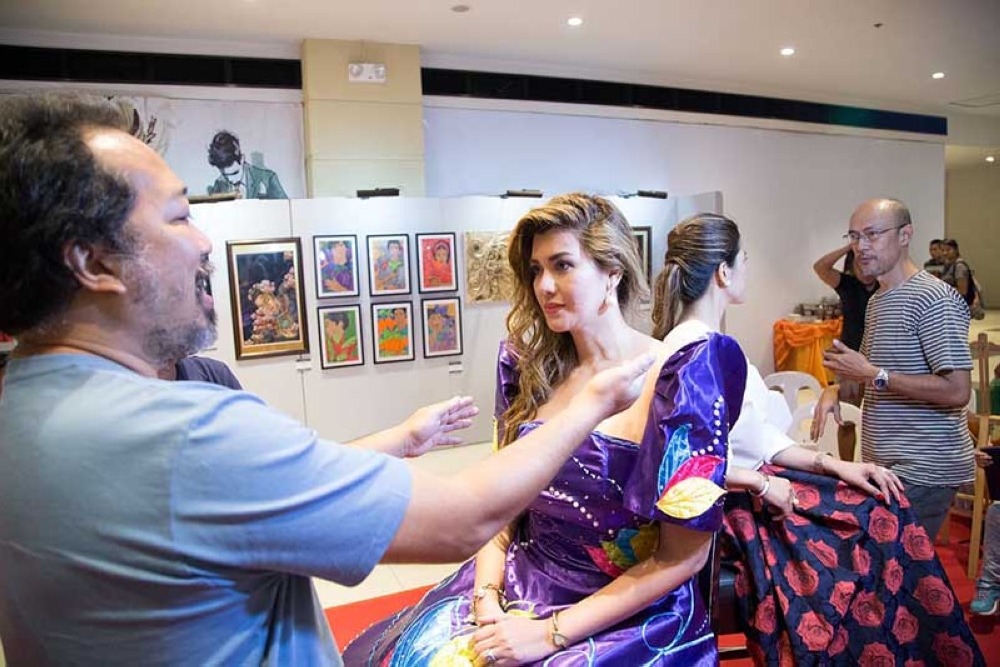 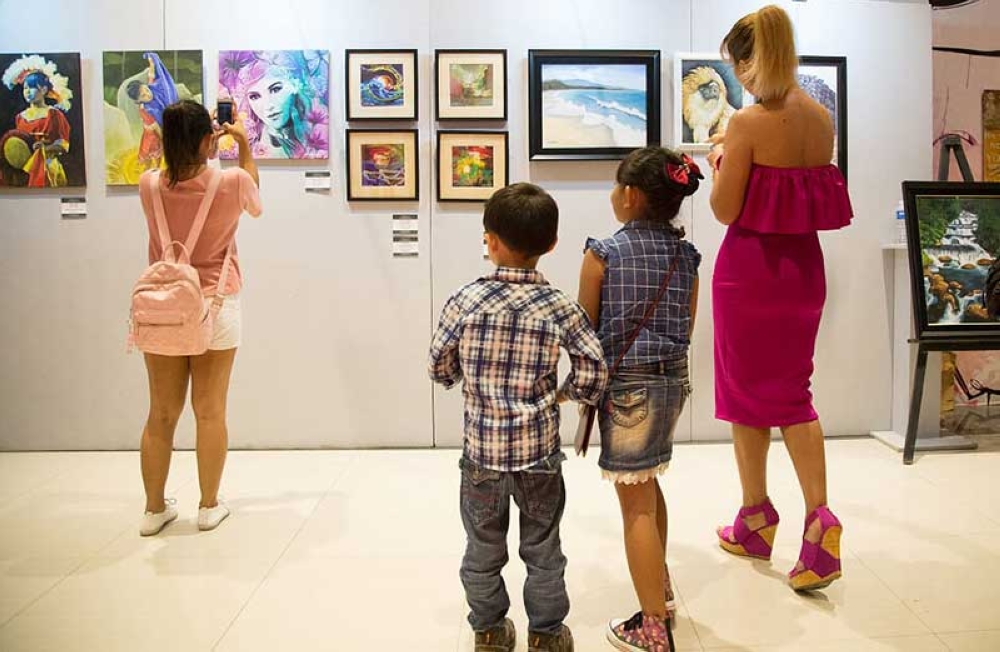 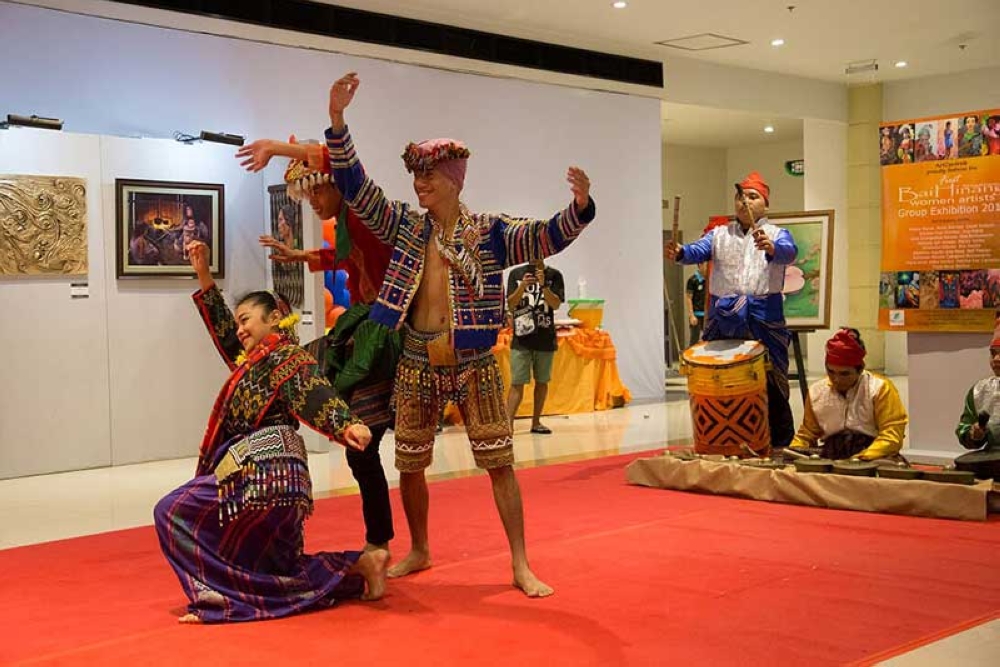 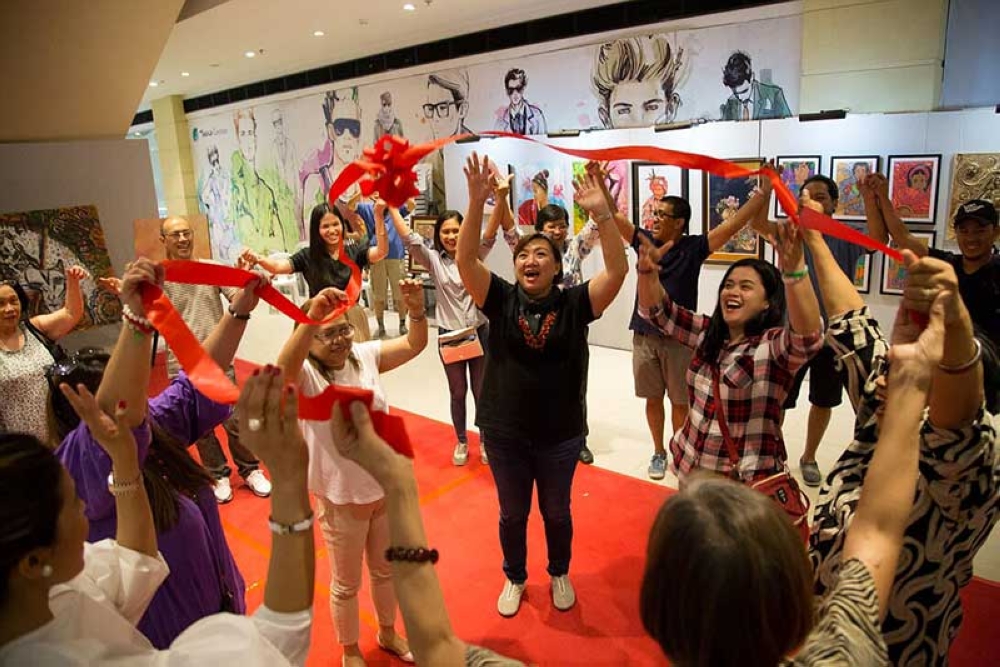 ART is everywhere indeed in Davao City, and with the interest to show, a group of women, a big group at that, gathered to put up a group exhibit and further shake up the art scene in the city. They come in all shapes, sizes, ages, and art in what is typical of the female kind -- just expressing themselves.

Local women artists are fearless, uninhibited in their expressions of ideas in and through their art. I think the strength lies in the fact that these women are not concerned with competing and comparing themselves with other artists.

“Basta pinta lang,” said Dadai Joaquin, who is among the few professional artists in the group. The First Mindanao Bai Hinang Group Art Exhibit, which opened last June 9, and ends on Saturday, June 23, 2018, is a merry mix of artworks of 20 Dabawenya artists now showing at Felcris Centrale along Quimpo Boulevard, Davao City.

Bai is the indigenous word for woman, while Hinang is a Dabawenyo word meaning to create or build or work. Like many endeavors by women groups here, the group and exhibit just came to be.

“Sa opening ng isang exhibit sa Centrale, Elenita Dumlao, Madoline Agudo (dela Rosa), me and Jane Ramos were supposed to meet but it rained hard so only Ate Boots (Dumlao) and Mads were the ones who were able to ho to that meeting,” recalled Trixie Borja Borbon.

“Chika-chika sila... the next meeting Bai Hinang was announced to the group na and an exhibition was planned and carried out agad.”

Here are some of the short profiles of the artists: Jocelyn “Jing” Cayacay Rabat was born and raised in Davao Oriental. She is a lover of nature and promotes clean environment in any way she can, thus her subjects include Dahican Beach and the Aliwagwag Falls. Jing is a successful businesswoman who plays tennis with friends if not engrossed in painting.

Trixie Borja Borbon was born and raised in Davao City with parents from Batangas and Bicol. She has been drawing, painting, dancing and singing since childhood and learned portraiture from her mother.

Anne Worsley is a home grown Dabawenya artist. At seven, she started to explore the world of art with her grandmother as her guide. Aside from being a budding visual artist back then, her mother also developed her singing skills.

In college, her band performed gigs both nationally and internationally. She pursued a career in modeling and ultimately won third place for Dubai’s Calendar Girls in 2003.

She met and married a British national in Dubai and has since settled back to Davao where she put up a restaurant, kids play center, and a sports and recreation venue, and also accepts part-time gigs for singing, hosting, and local TV commercials.

Jacinta Eve Sevilla also hails from Davao City. She took up Fine Arts major in Painting at the University of Mindanao back in 2012-2013 before pursuing a major in Applied Linguistics.

Her art is inspired by nature, animals and the love for the environment hoping to spread and awaken the consciousness of people to be more responsive to the worsening condition of mother earth and the fast extinction of many animal species worldwide.

Katrina Kae Carriedo, born and raised in Davao, worked as a copywriter for a couple of Advertising agencies in Ayala, Makati for two years before coming home where she worked with the late Bai Manginsay.

She is now a freelance copywriter, event photographer, conceptualizer/visualizer, and a former Visual Arts Instructor at Philippine Women’s College of Davao, among many activities.

Ren Tindalgo is also into many forms of art -- music, theatre, visual arts, poetry -- and physics. A BS Physics undergraduate from the University of the Philippines - Diliman, she co-founded a group called “Art in Stories”. She considers herself a post-modern artist.

Dadai is an impressionist who plays with myriads of colors. Born in Midsayap, North Cotabato, her family transferred to Davao City when she was 7. Raising her own family, she was into public relations and advertising, and was mounting big events.

She decided to become a professional artist and staged her first solo exhibit entitled Guhit in July 2010. She has had three solo exhibits hence and several group exhibits.

Madoline Agudo-Dela Rosa was an Associate Professor of the University of Southeastern Philippines and primarily taught drawing and drafting, later Philosophy, Humanities and Social Science subjects until she retired in 2013.

Jimmelyn A. Olbinar is a graduate of Bachelor of Arts in English major in Language at the University of Southeastern Philippines. A self-taught artist, she learned drawing techniques and styles from watching videos and doing research.

She's a retired academician, having 25 years of academe experience both in teaching and administrative work and was the chairperson of the Communication Department of Assumption College Convent of the Assumption, San Lorenzo Village Makati.

Elenita Cruz Dumlao is another home-grown artist from Davao City. She has a Bachelor of Science degree in Psychology but taught Arts and Music in College.

Aside from visual arts, she is also in dance, theatre and music. At present, she is the artistic director of a multi-awarded Davao-based cultural company. She has a long list of achievements to her name in visual arts and has had nine solo exhibits.

Dumlao is the brain behind Bai Hinang, and was very apologetic as she could not locate the other artists's files. But she was quick to make up and describe Rubemel Monica Cabagnot Bustamante Monica as a hyper realist who often uses ballpens for her artworks, Maria Amor delos Santos as an abstractionist and loves to express herself through mix media art, and Honney Lyn Amaga and Allene Baculi as the babies of the group, being art students who are exploring realism and are inclined to do portraitures.

Busybodies as they are, the exhibits included several free workshops that had the women teaching their craft. “Workshop participants were public school students na elementary and high school, kids who are their school’s art club members, very eager to learn and excited despite limited materials,” Joaquin said of her workshop.

Seeing the talents of the children made her volunteer to teach the children some more. “I suggested the school’s club should partner with artists for mentoring. Like napa-volunteer ako,” she said.

“Seeing there were kids who were talented, I told their facilitator I'm willing to come to their club meetings to teach them for free. I-schedule lang.” Indeed, women do not just create. They nurture.