Making Halal beef accessible to all 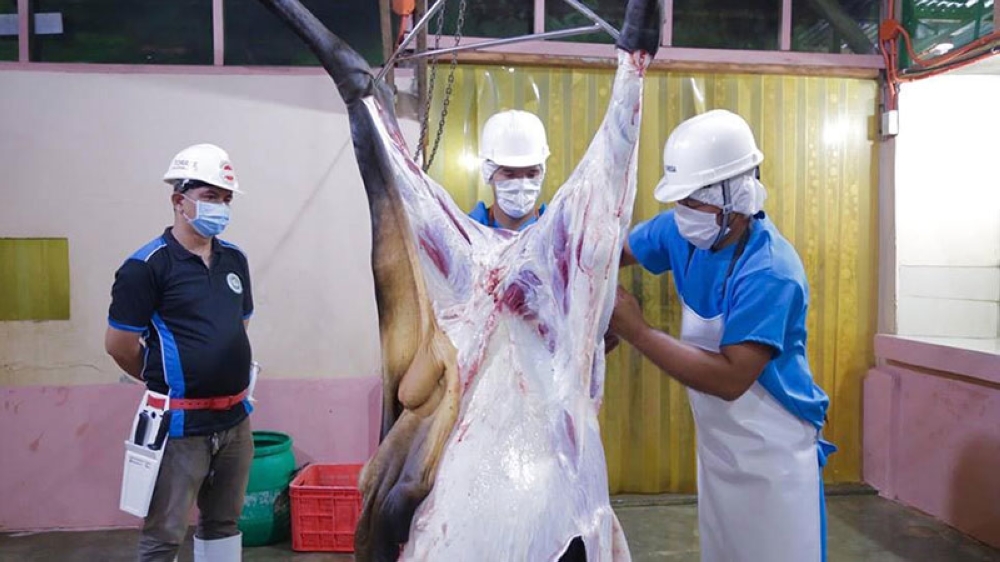 AS A mother practising Islam, Lilibeth Contora leads her children to a Halal way of life from consumption, dressing, to social interactions.

Residing in a predominantly Christian environment, finding Halal food for household's consumption had been difficult until she decided to produce it herself.

This came after her family established the Contora Halal Slaughterhouse in Datu Abdul, Panabo City in 2014.

Halal, an Arabic word defined as permissible according to Islam law, is required in the consumption of food as well as services for Muslims.

For meat products, getting rid of pork, which "haram" or forbidden, is not enough. It must be sourced from healthy animals that were slaughtered in a single cut. Upon transit, there should be no cross-mixing of Halal products with non-Halal and sanitary regulation must be observed from the abattoirs to the point of sale.

"Aside from its stringent process, there is also a misconception that Halal is only for Muslims which limits the market of the products. Everyone must realize that Halal products are for all consumers with the assurance of hygienic process and safety as an added value," said Lilibeth's son Isah in an interview.

As an independent Halal butcher, slaughtering one cattle for household consumption turn out to be expensive and compelled the family to sell the surplus meat before it gets spoiled. Lilibeth then decided to rent a stall at the town's public market.

Introducing Halal beef to Panabo consumers did not come easy at the start since only a few customers heard about their product and it is located few meters away from the convention meat stalls to avoid contact with "haram" products. The misconception that Halal products only cater to Muslim consumers also limits their marketing reach.

"There were times that it would cost us around P30, 000 to butcher one head of cattle and only earn P500 pesos the whole day," said Isah's twin sister Aisah.

"For almost a year, my mother struggled with low proceeds to the extent that our father advised her to close the shop to avoid further losses. Despite of this, our mother kept her faith and persevered believing that making Halal food available to fellow Muslims is her humble way of serving Allah," Aisah said.

Her efforts of producing and selling authentic Halal beef eventually paid off as delighted customers begun to spread the word about their product and more customers were able to locate their Halal beef stall.

"Number of customers increased and some even came as far as Tagum City and Davao City. We have Christian customers too especially those who are cautious of the quality of beef they are buying. In our stall, we only sell pure cow's beef," Aisah said.

Today, the average of butchered heads in its daily operation runs from two to four heads. During Ramadan and other festivities, more than 10 heads are butchered to cater to additional orders.

"Halal is a disciplined process from the farm to abattoir up to the distribution [outlets] proper hygiene must be observed. It is doing ordinary ways in an extraordinary way," said Jonathan Torres, Jr., the city government's deputized meat inspector for Contora slaughterhouse.

On a daily basis, Jonathan is already on site as early as1:00 am to inspect if butchers are fit to work and wearing personal protective equipment. "If they are sick even just colds and fever, they are advised to rest to avoid contaminating other workers and the meat products," he said.

Contora management ensures that Halal procedures are observed in their daily operations where hygiene and sanitation is a must and cruelty to animals should be avoided such as stunning.

"They sourced their cattle from Bukidnon. Animals were given enough time to rest before delivery and wash with clean water before it enters the slaughterhouse," Jonathan said.

"The cow must be in Quibla or positioned facing Mecca. Before slitting, a supplication is uttered asking Allah for the life of the cow to serve as food," Isah added.

Experts say animals slaughtered according to Islam law are healthier for consumption due to the drainage of blood and bacteria upon severing the artery, vein, and windpipe.

The carcass should not lie on the floor but instead hung to avoid contamination. The hanging lasts from dehiding to evisceration wherein the meat inspector comes in to inspect if the meat is safe for human consumption. The parts of the cow are then cut in several forms such as ribs, tenderloin, and t-bone and placed in plastic crates to ensure sanitation.

Going in and out of a halal slaughterhouse, Jonathan could attest that the rigorous process conforms to the required standard in meat products such as Good Manufacturing Practices (GMP) and the Standard Sanitation and Operation Procedures.

What sets Contora halal beef apart from the ordinary meat products Jonathan said is the added value such as the assurance of clean handling and food safety making it fit not only for Muslims but also across other religions.

The Halal process may be tedious compared to conventional method but Contora's practice eventually paid off after receiving Halal Certification from Muslim Mindanao Halal Certifying Board. To date, Contora slaughterhouse is the only Halal certified slaughterhouse in the region and one of the only two in Mindanao, the other one is located in Cotabato City.

The National Meat Inspection (NMIS) has also granted Contora slaughterhouse the Double AA slaughterhouse with its compliance to the GMP and SSOP requirements.

These two certifications serve as seals of assurance on the authenticity of Contora's halal products boosting their growing prominence among halal consumers enabling them to expand its operations.

Surely the Contora family has come a long way from securing halal food for their own family to making halal meat more accessible to all consumers.

"With the growing awareness on the numerous benefits of halal products, we are optimistic to capture a sizeable market or meat consumers for both Muslim and Christians," Aisah said.

"We want to expand selling halal products to other parts of the country to cater to more consumers. We are also looking into developing other processed food such as halal beef tocino, beef chorizo, and lumpia," Aisah said. (Noel T. Provido)