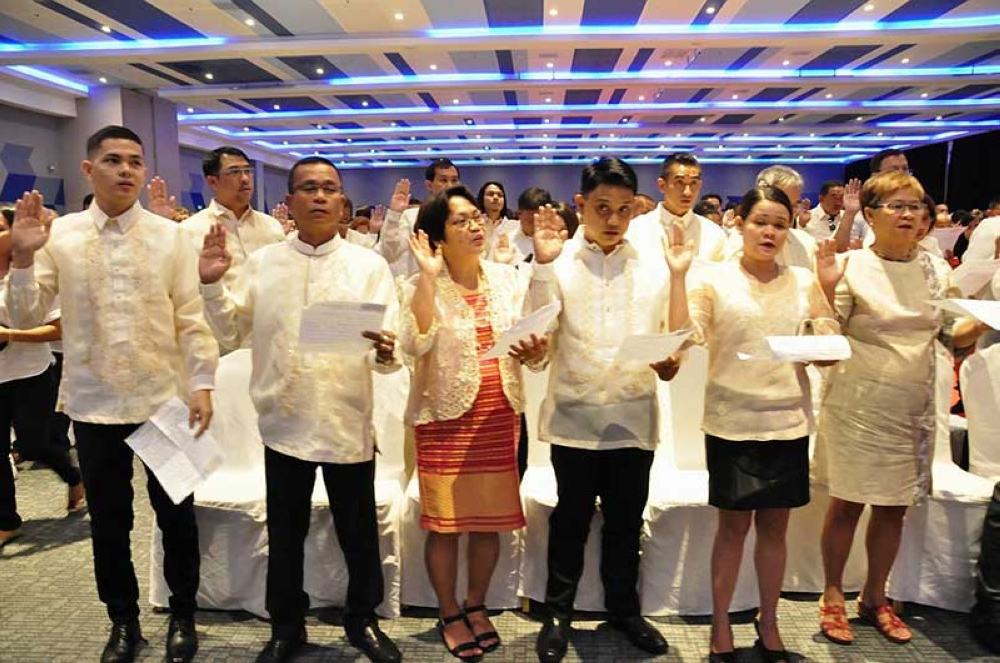 BACOLOD. Some of the incoming barangay officials of Bacolod City during their oath of office at SMX Convention Center, Saturday. (Merlinda A. Pedrosa)

REMEMBER your oath of office.

This was the message of former Metro Manila Development Authority head Francis Tolentino to all the incoming barangay officials of Bacolod City during their oath of office at the SMX Convention Center on Saturday.

A total of 488 barangay officials took their oath.

“We gathered here today not to celebrate the victory of individuals, but the victory of Bacolod City. For you have just been sworn into office to serve your barangay as well as to serve the future of your city, he said.

Tolentino stressed that while the barangay officials are doing the oath of office, they swore in with God.

“In our Panunumpa sa Katungkulan, it stated ‘So help me God’ which evokes the blessings, the guidance of the Almighty and its different from Panunumpa sa Watawat. Maybe it’s now the time to change it,” Tolentino said.

He said it has been observed that in the middle of their term, most of the barangay officials are no longer functioning.

“Just remember your oath na tutuparin ko ng buong husay at kakayahan ang lahat ng mga katungkulan ng aking kasalukuyang tungkulin. I congratulate you all, only a few were given a chance to serve after the election. The power to lead and positively change the lives of others is your special gift from God, therefore, it is also from God that you should seek guidance strength, wisdom, and life as you lead your barangay. Today, you are being called to lead not only effectively but more so righteously,” he added.

Tolentino also announced that after the oath-taking, the barangay officials are also required to attend the regional oath taking to be administered by President Rodrigo Duterte.

Maguindanao 2nd District Representative Zajid Mangudadatu, who also delivered his message, said he is hopeful that the barangay officials will do their functions and duties, especially on their campaign against illegal drugs.

He said the barangay officials, as well as the Sangguniang Kabataan (SK) officials, will always remember their functions within their barangay.

Tolentino and Mangudadatu are expected to run for senator under the administration banner in 2019.

For his part, Mayor Evelio Leonardia said he is thankful with Tolentino and Mangudadatu for accepting their invitations.

“They are here because they love the barangay officials in Bacolod City,” he said.

Leonardia said this is the time that Bacolod is growing rapidly.

He said the growth in Bacolod is inevitable because of the continued increase if business registrations in the city compared in the past three years.

“We can only have that so-called inclusive growth if we can have the support and participation of the barangay captains and kagawads,” he added.

Leonardia noted that when they will do the final plans for Bacolod, they will seek the barangay officials’ suggestions, advice, and guidance.

“Because we always believe that we never have the monopoly of good ideas, we can only make Bacolod City’s growth and prosperity complete if we can have the participation and leadership of the barangay officials, that is one I appealed to you,” Leonardia said

Vice Mayor El Cid Familiaran said of the 488 barangay officials, 61 are barangay captains and the rest are barangay kagawads.

“All the barangay captains are present and we are thankful for that. Nothing personal and no political commitments, it’s one way of showing to them that we are willing to work, cooperate and unit with them for the good of the city,” he said.

Familiaran urged the barangay officials to work and cooperate with the City officials for the progress of Bacolod.

Congressman Greg Gasataya said that the City Government is willing to work hand-in-hand with the respective barangays for the sake of the city.

“We are fortunate that in 2017, Bacolod City was given by President Rodrigo Duterte P1.3 billion worth of infrastructure projects. In 2018, we were given projects coming from the national government that reached to P1.6 billion and P1.1 billion worth of school buildings,” he said.

He said the city officials did not compete because they respect each other.

“We worked together, we complement each other and we don’t compete with each other. There’s no time for us to compete, so we are hoping that when you assumed your post, we will have a better governance not just in the city, but also in your respective barangays,” he added.

Department of the Interior and Local Government (DILG)-Bacolod director Joy Maredith Madayag said the agency will continue to exercise their mandate of general supervision to ensure that the barangay officials are performing their duties, powers, and functions within the bounds of the law.

“We will continue to remind your compliance. As your partner, we will continue to guide you and engage you in the implementation of the major programs of the national government such as its fight against criminality, illegal drugs among others,” she told the village leaders.

“Please be reminded that the development of the city and the country, in general, rests upon you. Let’s propel our city for further development and let the next generation reap the fruits your efforts,” she added.