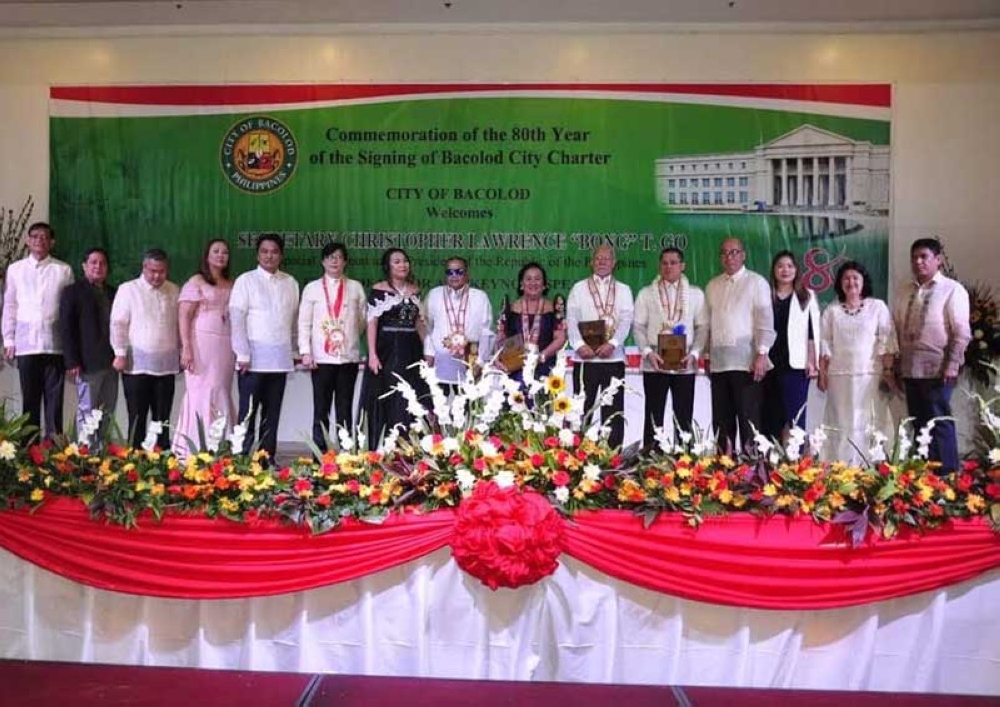 This was how Bacolod City Mayor Evelio Leonardia described the city's Banwahanon awardees who were honored on Monday, June 18, during the commemoration of the 80th year of the Signing of Bacolod City Charter at the L' Fisher Hotel.

“If they are to be emulated by others, you can just imagine the multiplier effect. They set our standards and even customs and traditions. I believe our people are the instruments that make Bacolod what it is today and what it will be in the future. At the time like this when Bacolod is rapidly growing, we need them all the more," he said.

Banwahanon is the highest award that the Bacolod City Government bestows on its citizens in recognition of their works and achievements which made a great impact on the community.

Año is an organizer of the more than 28 community-based organizations of the urban poor which resulted to the registration of 11 organizations with SEC and HLURB, accreditation by the City Council of Bacolod and partnership with the City of Bacolod in various programs and projects.

His painstaking efforts have helped six communities to own home lots, benefitting 141 families and three organizations which have implemented livelihood projects worth millions. "Kasamahang Jun" as he is known, championed the cause of squatters in times of demolition or relocation by assuring assistance in terms of decent, safe and comfortable housing.

Ka Jun also organized the solicitation and delivery of relief goods for Typhoon Yolanda victims and distributed these to affected areas all over the province. Despite his total blindness since 2003, Ka Jun never stops serving the urban poor be being an active advocate and proponent of grassroots democratic participation in local governance. He is also the founding organizer of the "Kongreso ng Pagkakaisa ng mga Maralitang Lungsod (KPML).

De los Reyes is also an accomplished doctor by profession whose dedicated service to various communities in Bacolod has spanned almost five decades. From conducting free medical consultation, immunization of cholera and typhoid, feeding of malnourished children, deworming and distribution of medicines to the donation of nutrition feeding center, water-sealed toilets, police outpost and 17 houses to Gawad Kalinga which is considered her major achievement.

De los Reyes, in her various capacities in a different organization, has not rested on her laurels even up to this time. Her cancer awareness program and the free surgical operation had benefitted hundreds of indigent patients who availed of pap's smear, self-breast examinations, cataract and harelip operations in many puroks and barangays in Bacolod since 2005 to present.

De los Reyes’ continuing projects include adopt-a-barangay, monthly immunization, deworming and feeding, family planning and breastfeeding lectures, cancer screening and child advocacy focusing on infants, toddlers, and children in different agencies such as Holy Infant Nursery Foundation Inc. Through all this, De los Reyes’ relentless passion and personal sacrifice have set a lasting solid example to the growth of her profession, nationality recognizing her as a Rizal awardee.

Martinez is a Bacolod City's master artist who stands as one of the strongest pillars of the art in the city. His main contributions to the art scene are livening up the city's arts consciousness, making art reachable to the masses and showing people that artists can make their arts sustainable.

During his term as president of AAB, he spearheaded the conduct of free workshops to promote and encourage more young people to pursue their passion and indulge in art and create awareness in the community. As an environmentalist since childhood, Martinez has gained recognition and accolades for his one-man shows inspired by his love for nature.

Considered as a landmark in Martinez's professional life in art is his Station of the Cross in San Antonio Abad parish church, which is a standout in Negros. His 78 years has been dedicated to the widespread growth of the art industry.

Yanson is the founder and prime mover of the Ceres Negros Football Club Inc. who brought Bacolod City and Negros Occidental through his Ceres Negros FC's entry in the Asian Football Confederation in the last five years.

His love of football has snowballed the aggressive promotion of the sports in the Philippines not to mention his vital role in the sport tourism initiatives of Bacolod by staging Ceres Cup every summer to foster and exhibit sportsmanship in a competitive, safe and friendly environment. With this, LRY, as he fondly called was nominated as Domestic and Sports Tourism Organizer of the Year-Private in 2016.

Yanson has put up an athletic scholarship program for potential football players all over the country who eventually earn a degree and get a decent job. His Ceres Cup also helped local government to generate revenues through hotels, restaurants and even transport sector with the influx of team supporters-parents, relatives and friends alike.

His dedication, support and drive towards his football dream have greatly made a considerable impact to the socio-economic, cultural and educational advancement of individuals and communities in Bacolod City which will serve as lifetime inspiration to future endeavors.