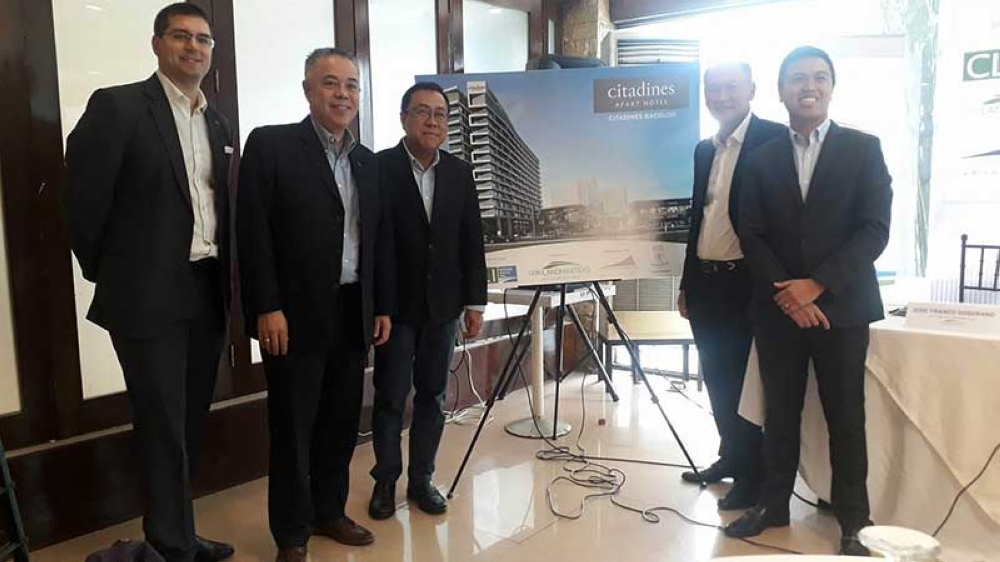 CEBU Landmasters Inc. (CLI) Bacolod Hotels Inc., a joint venture of property firm CLI and Capitaine Inc., has signed a service management agreement with The Ascott Limited for the development of the first hotel in Bacolod City carrying an international brand.

CLI President Jose Soberano III, during the agreement signing at 21 Bar and Restaurant in Bacolod City yesterday, June 19, said the activity formalizes the engagement that they will be doing with The Ascott Limited through its Citadines, one of the company’s most active brands in the country.

Soberano said the signing of the management operation deal with “the number one serviced apartment in the world” is a huge success for the company and the City as well.

“This is going to be a landmark in Bacolod. It is a kind of addition that we are really going to create here,” he said, adding that “our growth in this City and the rest of the Visayas and Mindanao will hinge on tourism as well as information technology – business process management as drivers of the region’s economy.”

Citadines Bacolod is a 200-room serviced residence that will soon rise on a 4,501-square meter prime along Lacson Street at Barangay Bata, in front of the three-tower MesaVirre Garden Residences, the first project of CLI in the city.

Once completed, this will be the fourth project of the Cebu-based developer with the service operator The Ascott and is expected to boost the former’s hotel portfolio to 969 rooms. The three other projects are in Cebu and Davao.

CLI earlier announced that it is pouring in at least P5 billion worth of investments for three projects in Bacolod City, which it considers as the “next big thing” in terms of real estate development.

Of the amount, at least P1.5 billion is intended for the development of the 14-level hotel, positioned to be the tallest building in the city.

The groundbreaking of the project is targeted during the last quarter of this year, while the development completion is January 2021.

Moreover, The Ascott Limited is part of the CapitaLand, one of Asia’s largest real estate companies headquartered in Singapore.

Its regional general manager for the Philippines and Thailand Arthur Gindap, who signed the agreement, said Citadines Bacolod is a milestone as it is their 20th property in the Philippines since its first project was constructed in Makati City in 2000.

“With its track record and deep knowledge of the Visayas and Mindanao market, we are happy to partner with Cebu Landmasters for our first project here in Bacolod City,” he said.

Cetadines brand characteristic is one that caters to the young professionals with a vibrant contemporary vibe.

Thus, the service operator expects to offer in Cetadines Bacolod a stylish home for business and leisure travelers, and guests and residents looking for topnotch hotel-like serviced apartments with all comforts of home.

Gindap said The Ascott offers spacious apartments with services like that of hotels and completely furnished with all the conveniences of a modern home.

“We cater to extended staying guests like one month to a year or even longer who might want to live in a place that has all the conveniences of a home yet have all the luxuries and comfort of a hotel,” she said, adding that “it is their home away from home.”

For his part, Alec Lustre, president of Capitaine Inc., said: “We hope that the people of Negros are up to see this project come to life as we are all part of this transformation as we move into the future.”

Citadines Bacolod has unit sizes ranging from 25 to 60 square meters, parking space, and an amenity deck on the third floor featuring a swimming pool, gym, game room and restaurants.

Architect Jose Pedro “Bong” Recio said the design is a team effort by CLI and Lustre and his family’s inputs.

Recio said the 1,000-square meter grand ballroom can cater to 500 people, thus, this is the place to go for conventions, weddings, and other events.

“Once the structure is finished, it will not be the leading hotel in Bacolod, but the only hotel in the city,” he added.

Jose Franco Soberano, executive vice president and chief operating officer of CLI, said the crowning glory of their whole project in Bacolod City is the welcoming of its global hotel development.

Soberano said their regards and confidence with the Bacolod market remain high, especially now that they plunge with world-class partners like The Ascott Limited.

“We look forward to having Cetadines as Bacolod’s favorite for a long-term, the city deserves very much,” he said, adding that “we are excited to develop and manage Bacolod’s future leading hotel.”