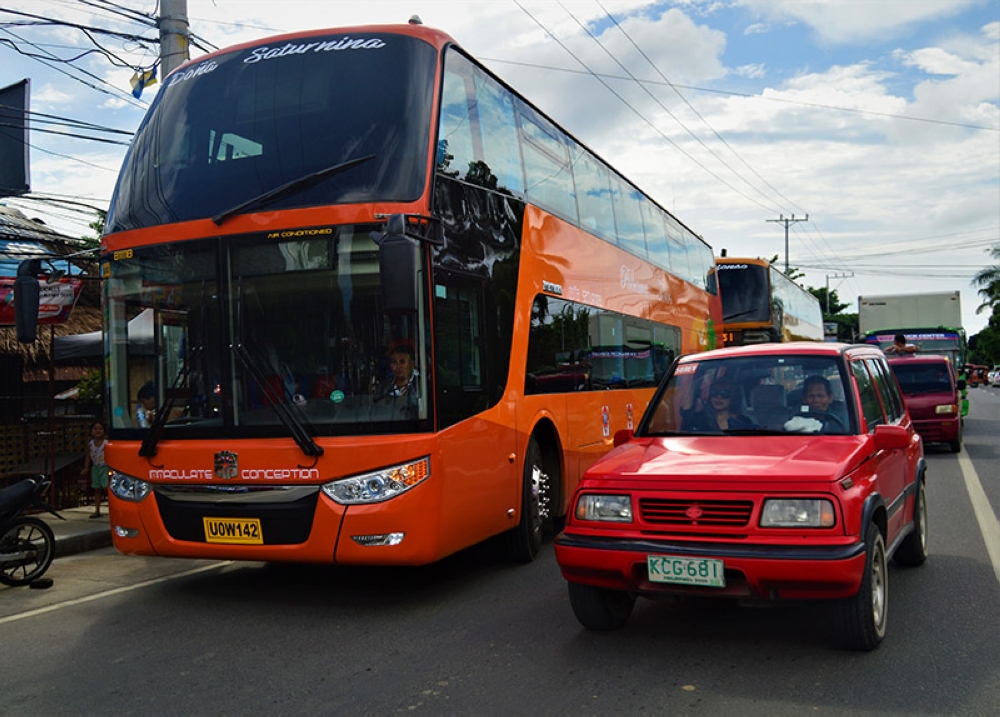 THE management of the transport company that introduced the first-ever double-decker buses in the country said its units are safe even for the treacherous roads of Bukidnon.

“I think the features of these double-decker buses are much safer,” said Serjohn Panis, Pabama Tours Transport Bukidnon (Pabama) general manager, the company that brought these novelty buses to Mindanao.

“We assure our passengers that they’re safe riding our buses,” Panis said.

The two Pabama double-decker buses began plying the Cagayan de Oro-Kibawe, Bukidnon route on Tuesday, June 26, after the Land Transportation Franchising and Regulatory Board (LTFRB) in Northern Mindanao granted the company franchise through a replacement policy.

Compared to other bus companies operating in the region, Pabama is a small player in Northern Mindanao’s mass transport industry, but has slowly gained a large following after it rolled out state-of-the-art buses last year.

Aminoden Guro, LTFRB-Northern Mindanao regional director, said that since there is a moratorium on new franchises, the agency granted Pabama the document for its new buses by substituting the franchise of the company’s older buses with the new ones.

Guro said the introduction of the double-decker buses is part of the public utility vehicle modernization program of the government, aside from it being the region’s pride as the first of its kind in the country.

The double-decker bus has a 74-passenger seating capacity and is equipped with the amenities found in first-classes buses such as a wi-fi connection, a built-in tablet computer in every seat, cup holder, a toilet, among others. The bus also has a global positioning system, a closed-circuit television (CCTV) camera, speed limiter, and voice sensor.

Jonathan Jantay, sales and marketing officer of Dura Bus, the firm that supplied the double-deckers to Pabama, said all the bus’s parts are made in Germany, United Kingdom and the United States but were assembled in China. Each bus costs P16 million.

The 420-horsepower-engine, Euro 5-compliant, double-decker bus has a tri-axle that can maneuver Bukidnon’s slopes with ease, especially in the zigzagging Mangima road in Manolo Fortich, Jantay said.

He added the double-deckers will have no problem traversing the mountain passages as it has withstood the high-altitude roads, about 10,000 meters above sea level, in the South American countries of Chile and Ecuador.

Guro said LTFRB green-lighted the entry of the double-deckers in the regions based on the numerous road tests made in Metro Manila, Baguio and Antipolo before these were brought here.

Pabama’s application for a minimal fare increase has also been approved by the LTFRB since the double-deckers are considered as “premium buses” in that they offer first-class amenities that are advantageous and convenient to the riding public.

“These buses are very welcome here as part of the government’s modernization program, although there is a memorandum order that primary or premium buses (like the Pabama double-decker buses) can increase the regular fare by at least 25 percent, which is equivalent to P2.50,” Guro said.

Guro the regular fare for double-decker buses plying to and from Kibawe is P378 and privilege fare is P302, based on the LTFRM memorandum circular that categorized fares for premium or premiere, super deluxe, deluxe and regular or non-aircon buses.

Panis said they are planning on adding more double-decker units in the future.