Systemic pesticides and their threats to humans, environment 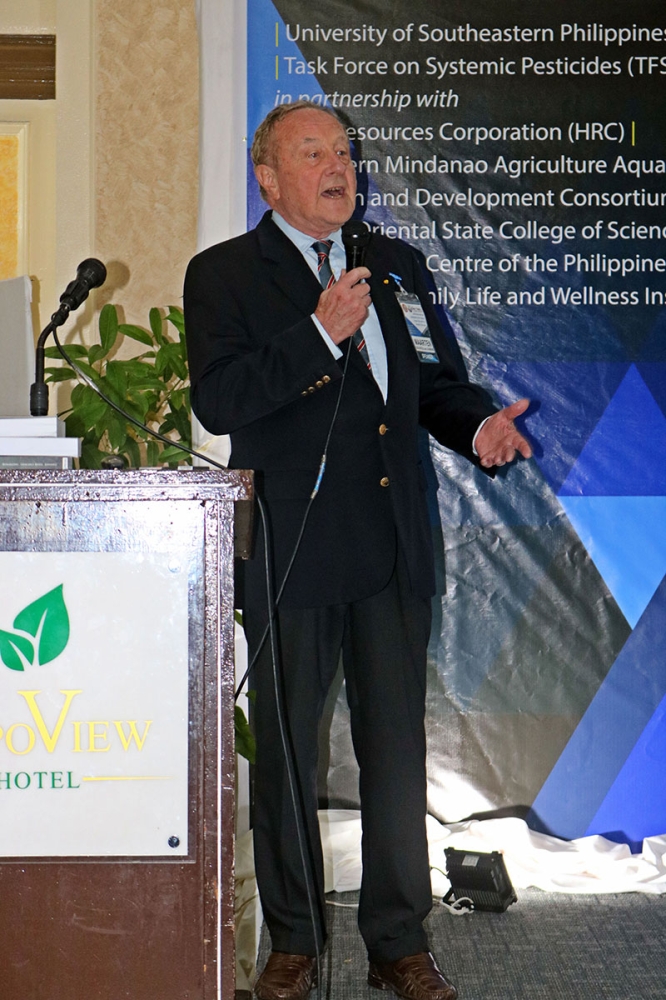 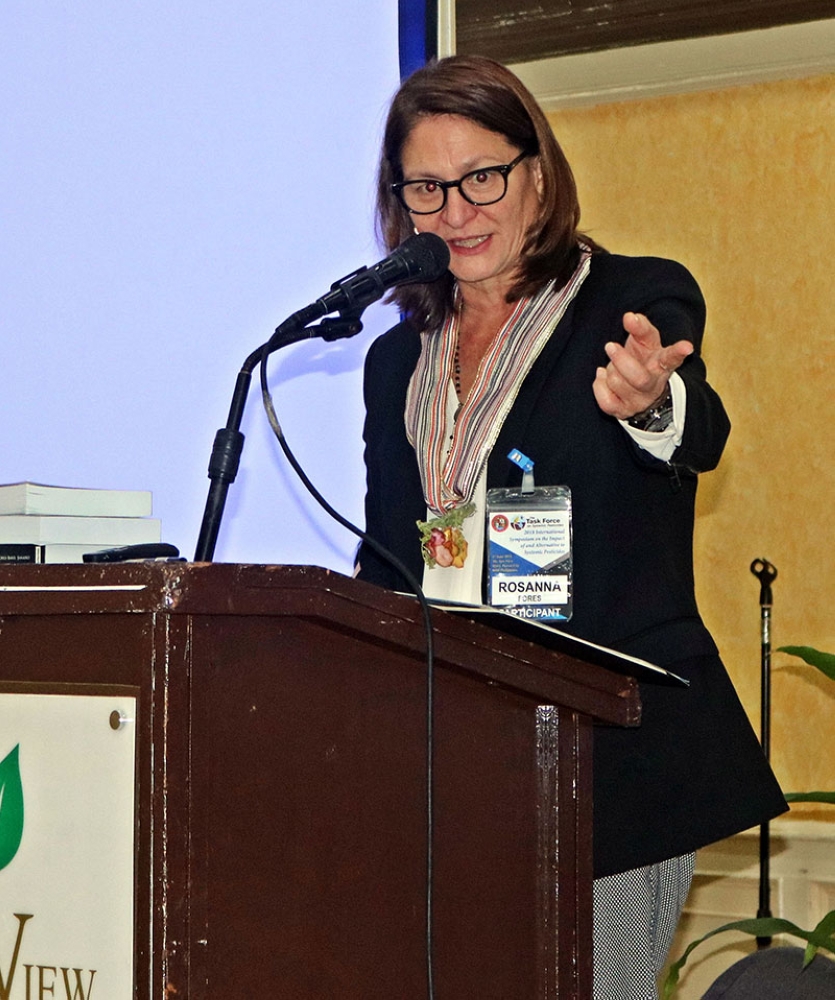 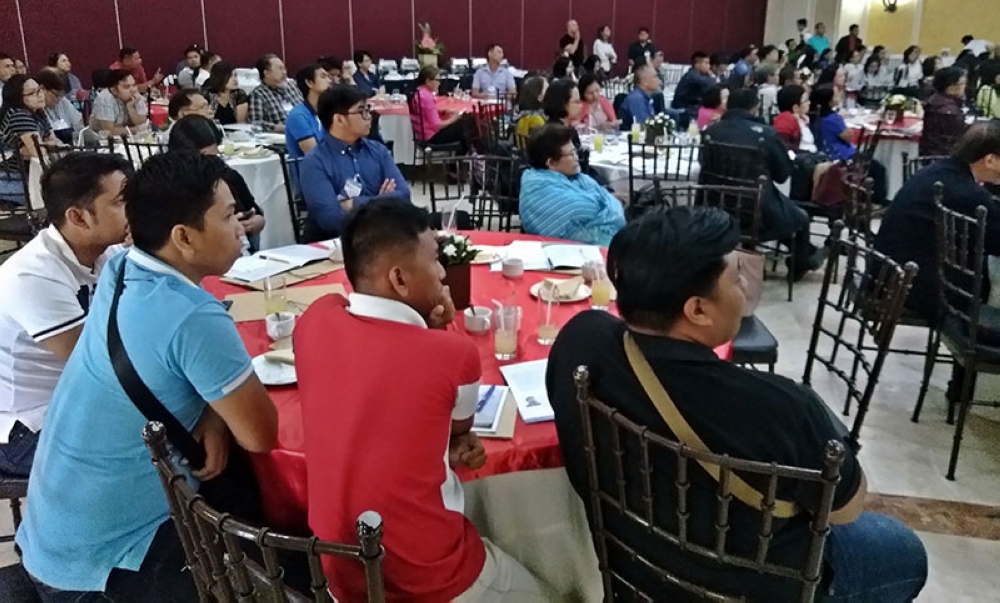 A portion of those who attended.

DAVAO Region, being a predominantly agricultural region despite its growing commercial and industrial sectors, will always be in the midst of a debate of the benefits and disadvantages of doing without pesticides, particularly systemic pesticides.

Systemic pesticides are described as pesticides that you cannot wash off. Once sprayed, it is absorbed by the plant and "moves around in its tissues". Thus, it not only poses risks to human health but also to biodiversity and ecosystems.

Top on the list are Neonicotinoids or Neonics, which has been linked to the steep decline of bees, which in turn affects pollination and a lot of other side effects. Neonics are widely used worldwide for seed and soil treatments, foliar sprays, turf products, flea treatments for pests and lawn care. In short, it's everywhere.

Thus the gathering last June 27, 2018 at Apo View Hotel of over a 150 participants from the academe, agriculture and aquatic sectors, and international scientists in the 2018 International Scientific Symposium organized by the Task Force on Systemic Pesticides (TFSP) and University of Southeastern Philippines (Usep), in collaboration with the Hijo Resources Corporation (HRC), Southern Mindanao Agriculture, Aquatic, and Natural Resources Research Development Consortium (Smaaarrdec), Davao Oriental State College of Science and Technology (DOSCST), Conservation Center of the Philippine Islands Initiative Inc., and the De La Salle Family Life and Wellness Institute at Apo View Hotel.

On its website, TFSP describes itself as "the response of the scientific community to concern around the impact of systemic pesticides on biodiversity and ecosystems. Its intention is to provide the definitive view of science to inform more rapid and improved decision-making." It was represented in the symposium by its chair, Maarten Bijleveld van Lexmond of Neuchatel, Switzerland and its vice chair Dr. Jean-Marc Bonmatin, a researcher at the Centre National dela Recherche Scientifique of France.

In his presentation, Dr. Chung-Hsin Wu of the School of Life Science of the National Taiwan Normal University pointed out that echolocation bats (mostly insectivores) have "greatly disappeared in many places" in just nine years.

"Similarly, it is reported that bees also suddenly disappeared in many places of the world," he said, "It is possible due to intake of the systemic pesticide imidacloprid."

Insectivore bats are tagged as insect terminators and are thus natural predators who control pest population. Bees, on the other hand, are in charge of natural pollination of plants. Thus, their disappearance is not just about the bats and the bees, but the survival, propagation, and fruiting of plants.

Dr. Chung-Hsin, they embarked on a study on the bat's echolocation and its links to ingestion of imidacloprid.

There was also an observed irregular flight path after the bats eat insects with that pesticide.

"In other words, orientation function of echolocation bats may be damaged by the pesticide of imidacloprid," he added.

Worse, Qiushi Professor K.L Heong of Zheijang University in Hangzhou, China, a former principal scientist of the International Rice Research INstitute (Irri) in Los Banos, Laguna, said, "It is a myth that pesticides are necessary to feed the world ... It is also a myth that insecticides have productivity gains in rice production."

"In the Philippines, we found that 80% of farmers' insecticide sprays are misuses," he added.

"If labor and health costs are factored in, farmers have no productivity gains instead they can lose more than US$55 per hectare," he said.

Sad to say, despite the many indicators that systemic pesticides is doing something bad for the farmers in terms of productivity and health, and to bees and bats, that naturally help propagate plants, Komiko Taira of the Tokyo Women's Medical University Department of Anesthesiology said that specifically for neonicotinoids "there is a gap in the scientific knowledge on its environmental health effects."

This does not bode well both for the environment and humans because there is an increase in the use of neonicotinoids.

Moreso, she said, despite the increase of detection rate of neonicotinoids and metabolits in humans, "the environmental health effects of neonicotinoids especially on neurodevelopmental diseases, have not been given adequate public attention."

The scientific forum was participated in by experts, scientists, and researchers from Switzerland, France, Australia, China, Taipei, Japan, Italy, Vietnam, Canada, and the Philippines.

Given the adverse findings from across the globe, TFSP vice chair and a researcher at the Centre National dela Recherche Scientifique of France Dr. Jean-Marc Bonmatin said that more than ever, people all over the world should call for a stop to massive uses of systemic pesticides, pointing out that this runs against environmentally sustainable agricultural practices.

HRC CEO Fores said she did not expect the symposium to be as well-attended as it was by international scientists at that and was very appreciative of all the inputs and all those who attended.

"It was a very meaningful event that hopefully can bring real change through Mindanao," she said, noting that the participants showed an openness towards what the symposium was pushing for, that is alternatives to Systemic Pesticides.

In her message, Usep president Dr. Lourdes C. Generalao welcomed the gathering, citing it as a venue that she hopes will inspire more people to take action, government and policy-makers included.