MALACAÑANG on Wednesday, July 4, said government critics may be behind the recent high-profile killings to "erode confidence in the President."

Presidential Spokesperson Harry Roque Jr. maintained that the government does not tolerate killings and that President Rodrigo Duterte is committed to fight crimes.

"There is no culture of impunity in the Philippines as we do not condone any state-sponsored killing," the Palace official said.

"We continue to adhere to the rule of law and consider the recent killings of high-profile figures as an attempt to erode confidence in the President, whose main platform of governance rests on fighting crimes," he added.

Halili was felled by a single bullet to the heart while singing the national anthem outside the Tanauan City Hall in Batangas on Monday, July 2.

About 36 hours later, Bote was killed in an ambush in Cabanatuan City.

Earlier Wednesday, Villarin claimed the President abandoned the rule of law by giving the "free license" to kill.

"The free license was given by President Duterte himself by making it clear that no one will face legal repercussions for the extrajudicial killings that are done in pursuit of his anti-illegal drug policy and tagged in the so0called Duterte's reversed 'Schindler's list' where those in it are not for saving," Villarin said in a statement.

Roque downplayed Villarin's statement, saying that Duterte's administration is focused on achieving peace and order in the country.

He also reiterated that the Philippine National Police would do its best to find the perpetrators of the gruesome deaths of the two mayors.

"We, however, cannot be deterred in our focus in securing and restoring order in the community. Our people have acknowledged the President as “the protector of people,” as evidenced by surveys giving him high satisfaction, approval, trust and performance ratings," he said.

"The Philippine National Police, on the other hand, is sparing no effort to find and capture the killers of the two slain mayors," he added. (SunStar Philippines) 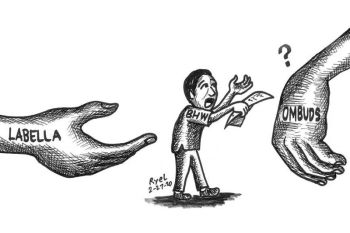