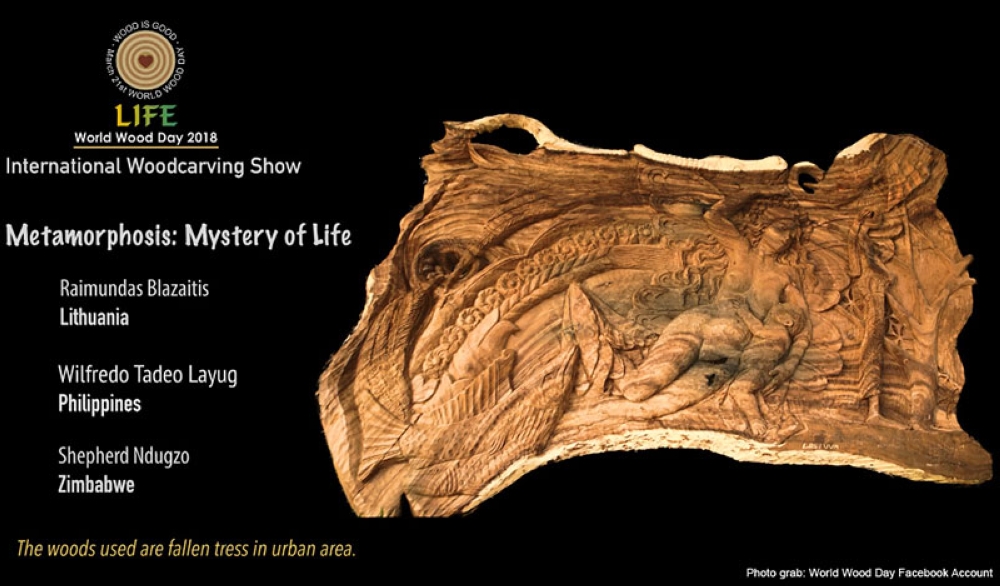 World Wood Day is an event each year aimed at promoting awareness on the cultural importance of wood.

Layug was tasked to create a wood masterpiece for the event in collaboration with two artists from Lithuania and Zimbabwe.

Layug and Ramundas Blazaitis and Shepherd Ndudzo named their presentation piece as "Mystery of Life."

"Our collaboration centered on the evolution of life. In relation with the reproduction of human being, Ramundas Blazaitis did the segment of the reproduction, Shepherd Ndugzo carved the pregnancy I carved the birth. The woman butterfly is coming out of the cocoon. Transformed from a moth, she nourishes the child as she passes her genes to the next generation. We have also incorporated nature to remind us our obligation to co-exist with the world we lived in," Layug said.

Layug said that the experience had opened for him new horizons in art. He added that the event has enriched his artistic perspective even more.

Layug is the first Filipino to collaborate in Cambodia for the same event.

The Kapampangan artist from Betis in Guagua is the first Filipino to up the first ever Filipiniana-inspired altar dedicated to Filipino Saint Lorenzo Ruiz and Blessed Pedro Calungsod at the prestigious Pontifico Collegio Filippino. He has done major retablos including that at the Cathedral of St. Joseph in Nueva Ecija, the St. John Cathedral in Lingayen-Dagupan, San Sebastian Cathedral in Bacolod and Cathedral of the Immaculate Concepcion in Urdaneta, Pangasinan.

Layug was also named Outstanding Guaguaeño for sculptor, Most Outstanding Kapampangan for ecclesiastical art and Best Actor in the 39th Metro Manila Film Festival for “Dukit,” an autobiography of his life as an artist. He is the most accomplished sculptor of his time.