From city to sea 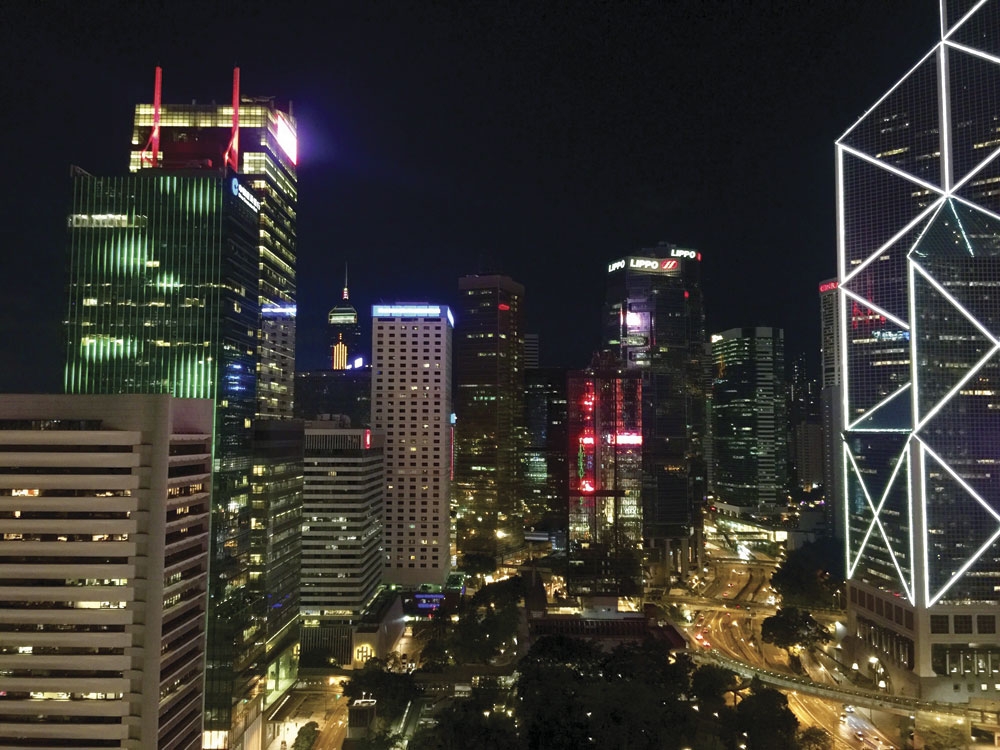 Stunning skyscrapers. Drink in this view with a drink in hand at Sevva’s rooftop bar in Central, Hong Kong. 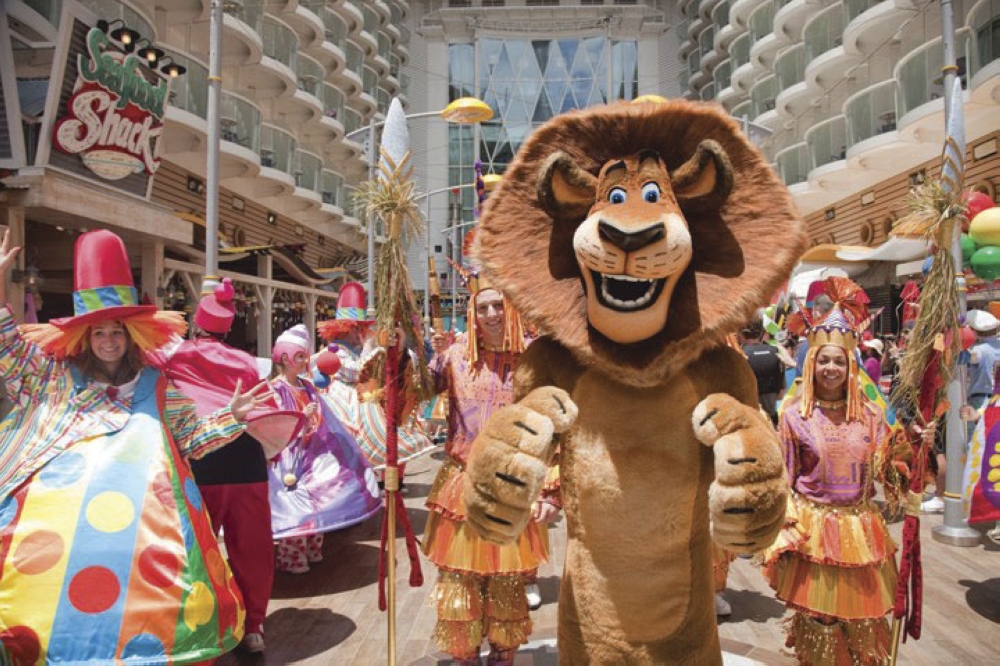 Larger than life. Experience the Dreamworks magic and hang out with your favorite characters from Shrek, Kung Fu Panda, and Madagascar as they parade and do photo ops on board the Royal Caribbean’s Ovation of the Seas. 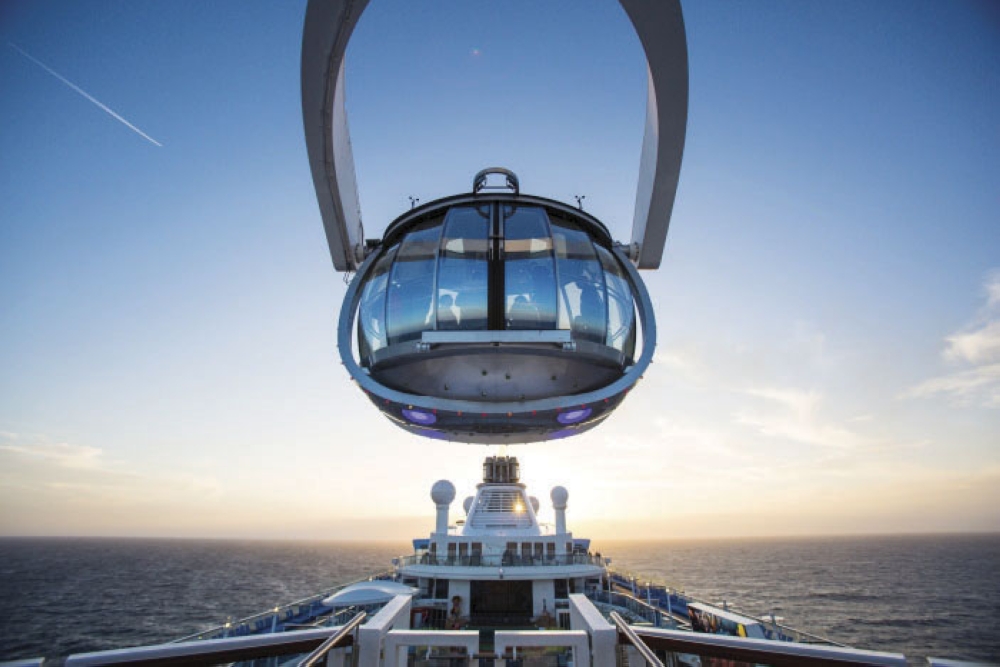 Taking you higher. The sky’s the limit at the North Star, a jewel-shaped capsule that can take you over 300 feet above sea level for a 360-degree view of the world. 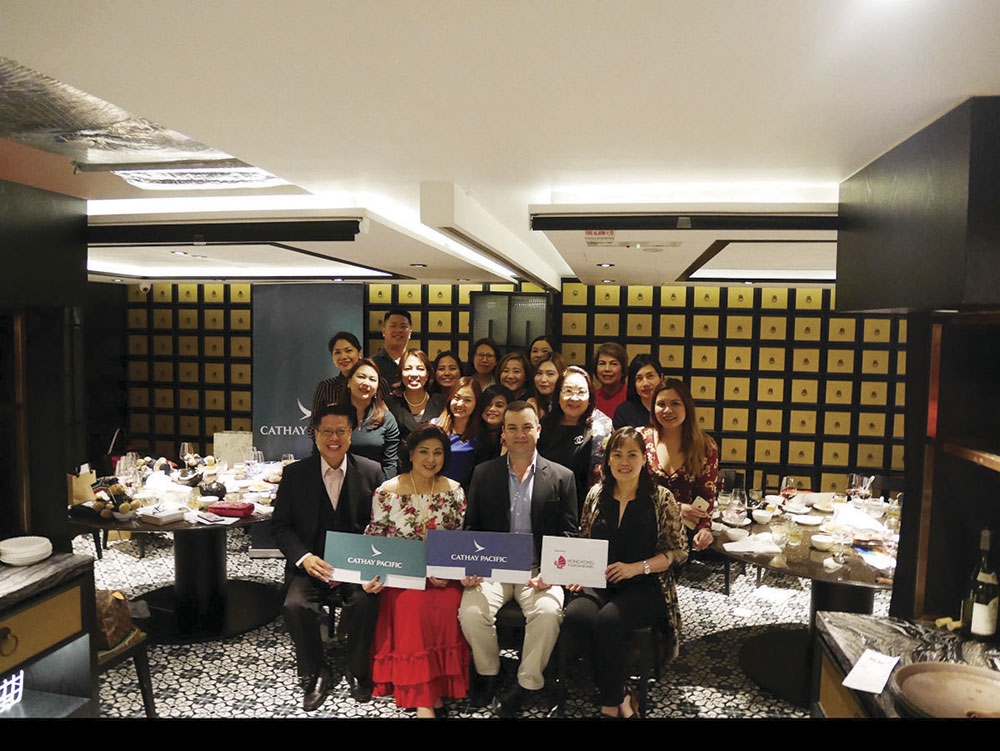 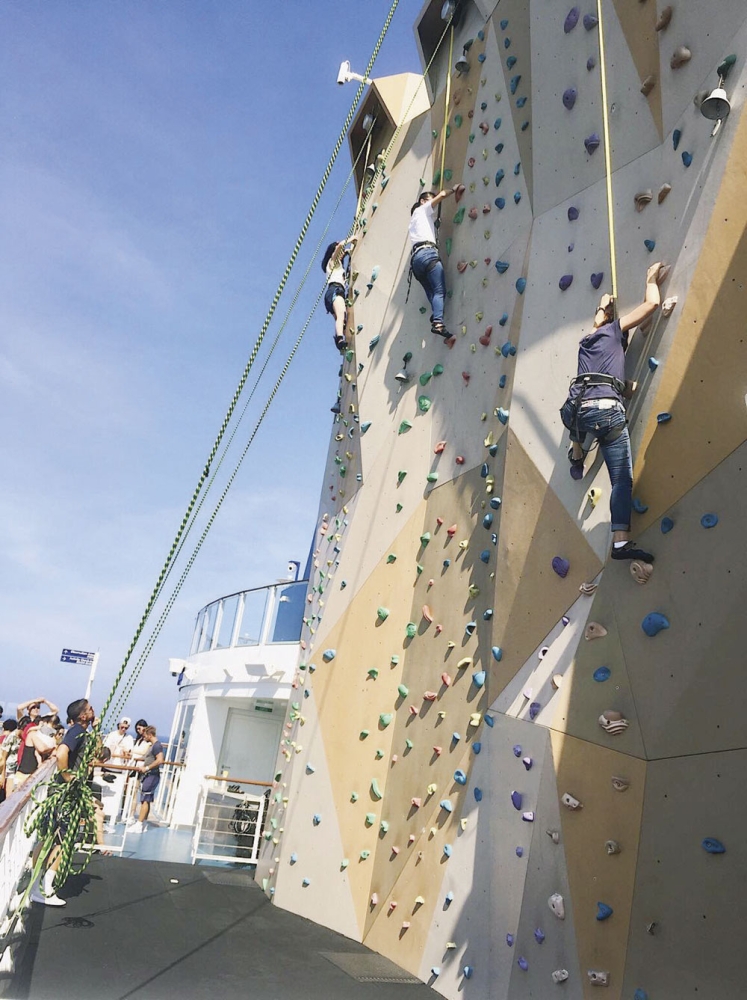 You rock. The ship’s 43-foot rock climbing wall exhilarates both beginners and speed climbers, while the view from above enthralls them. 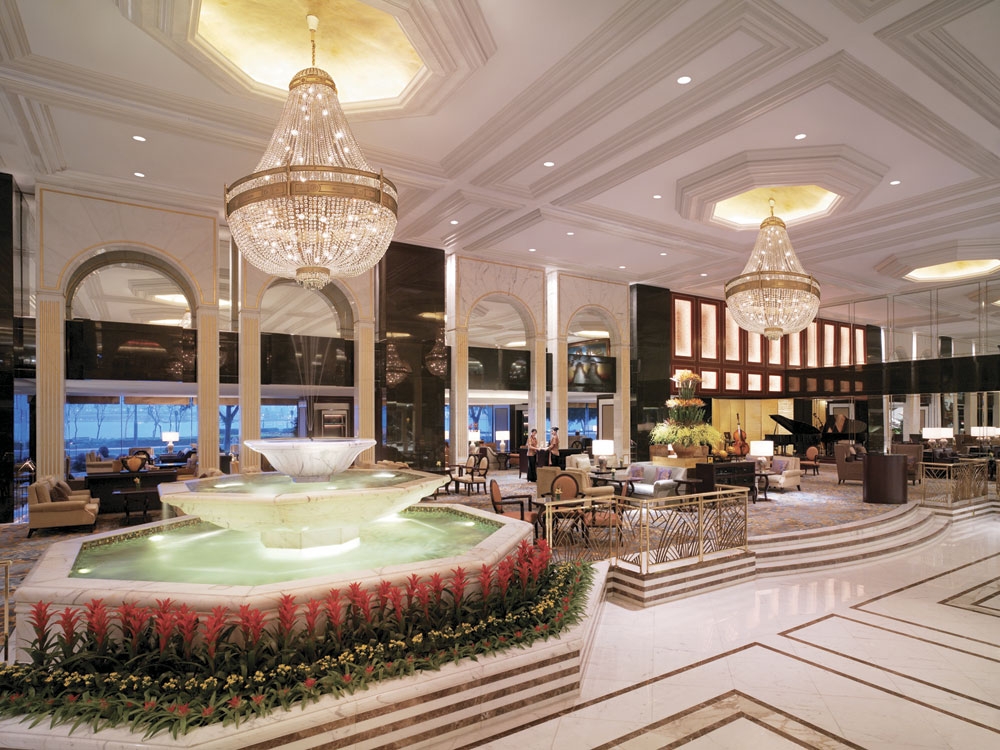 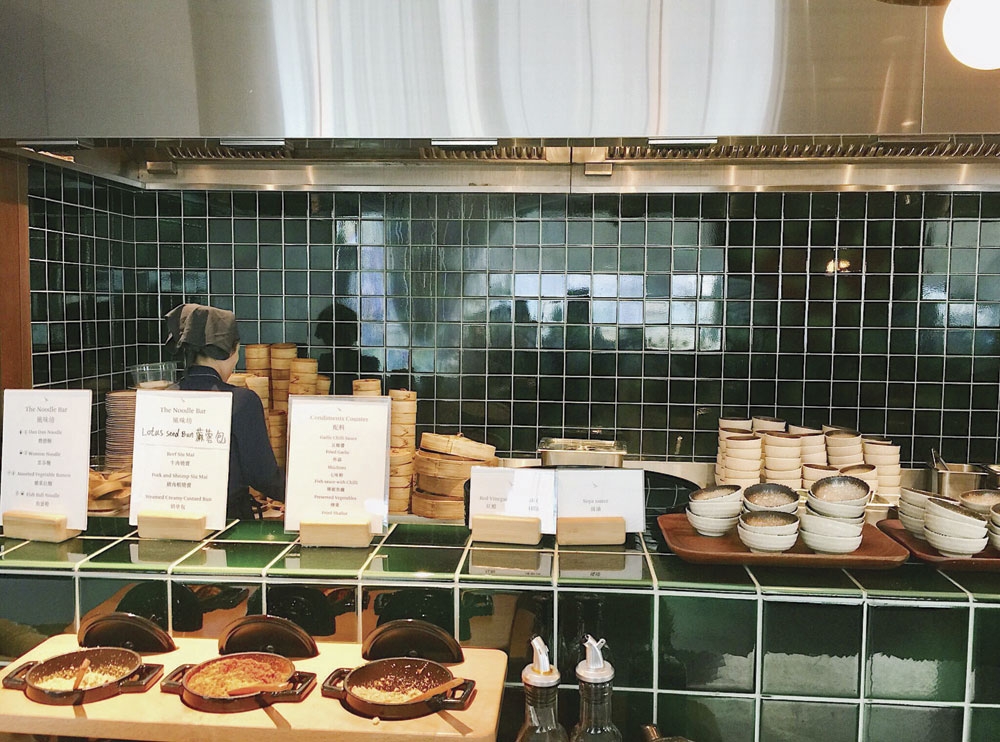 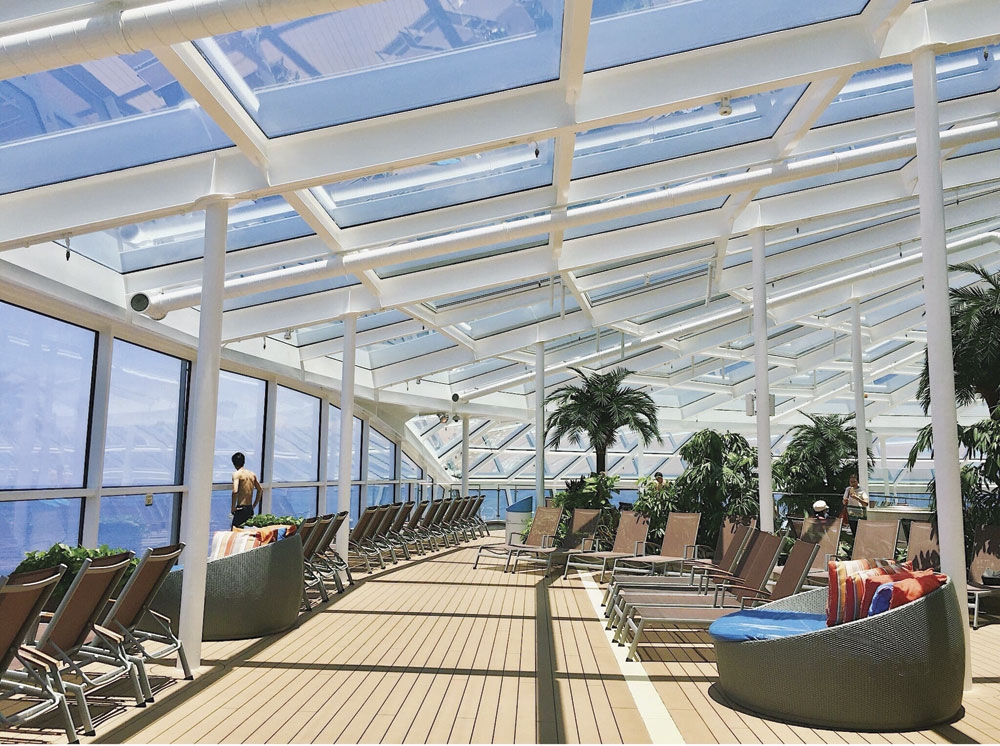 Indoor sunbathing. Enclosed in a crystal canopy, the Solarium allows one to soak up the sun sans too much heat as the space is also air conditioned.

YOU’D think that by your nth visit to Hong Kong, its skyscraper jungle would no longer bowl you over.

Your own eyes refute this notion as they can’t look away from the spindly skyline that’s made even more dramatic by night. It doesn’t help either that your home for the next two nights is the Kowloon Shangri-La, with some rooms having sweeping views of Victoria Harbour, and the iconic buildings of Hong Kong Island in the background.

Our party of almost 30, flown in to Asia’s World City via Cathay Pacific last May 23, could not feel any luckier that our hotel was strategically poised in the heart of Kowloon’s commercial, entertainment, and shopping district. There was no shortage of sights to see and things to do, hotel room Handy Phone in hand with an interactive guide to the city, and free unlimited internet connectivity. The challenge was to explore as much of Tsim Sha Tsui with what limited time we had on our hands, and notwithstanding the 40-degree weather outside.

Apart from upscale hotels, restaurants, and shopping malls, the district is studded with gastronomically and culturally stimulating establishments that add to its vibrancy. Those traveling with families, especially with tots in tow, can visit the Hong Kong Museum of Art, Hong Kong Space Museum, Hong Kong Science Museum, or the Hong Kong Cultural Center if only for the interactive, hands-on exhibits in some of them.

Serious shoppers have a bevy of options where they can shop till they drop. There’s Harbour City, a retail mecca along Nathan Road. The largest in the city, it houses more than 450 stores. Just nearby is Canton Road brimming with luxury labels as well as outlet stores. Then there are those micro malls tucked along Granville Road, where you can find prized Japanese and Korean products.

For those in the mood for street-style eateries and hole-in-the-wall Korean barbecue joints, Taiwanese noodle shops, and sushi bars, Kimberley Road is worth a wander. The 17-storey Chunking Mansions, divided into several tower blocks on Nathan Road, is where you can feast on Indian, Nepali, Pakistani, and African food.

We were reminded to meet everyone at the hotel lobby by 5:30 p.m. as we would be transported by Ann’s Travel Service Co. to the Dragon Noodles Academy (DNA), venue for Cathay Pacific’s 2017 Top Travel Agents awarding ceremony. After having exchanged pleasantries with the officials of the Hong Kong Tourism Board and Cathay Pacific’s country manager, we sat ourselves on either of the two round tables prepared for us in a private nook. I shot a look at Miss Hazel who was playing hostess at the time. She had said earlier that it was just going to be a simple dinner. Simple was the last adjective I would have used as platter after platter of palatable and elaborate dishes were served. From the sous-vide ginger chicken rolls starter and the steamed crab and shrimp dumplings, to the crispy lobster puff, Peking duck, and flowering tofu dessert, everything at the Michelin Guide-recommended DNA was classic Chinese and Cantonese food reimagined.

The only regret that night was handing out the awards after dinner which had some of the awardees feeling self-conscious about having to smile for the camera with fuller faces and bloated bellies. Before calling it a night, everyone had a nightcap of choice at the swanky Sevva, highly recommended by locals if you want those stunning skyscrapers at eye level and within intimate distance.

If you’re still up for some late-night grub, you can hit Knutsford Terrace back in Tsim Sha Tsui. A good number of pubs and clubs on this street stay open till 6 a.m., and the restaurants serve different types of cuisine. Hong Kong’s late-night dining and drinking culture is very much palpable on this terrace street.

We bade our marble bathrooms and extra large mattresses goodbye the morning after as we were off to another treat aboard the Royal Caribbean’s Ovation of the Seas. As Hong Kong has over 1,000 flights daily to over 200 destinations, it comes as no surprise that it is a popular pre- or post- fly-cruise destination. Just last year, it received 245 ship calls with a passenger throughput of 900,000 which consisted of a mix of guests from mainland China, Hong Kong, and international markets. These figures further cemented Hong Kong’s position as Asia’s cruise hub. This year, the city is once again the homeport of choice for mega cruise ships including Royal Caribbean’s Ovation of the Seas and Voyager of the Seas. Seasonal sailings may range from two to seven days and may even include special itineraries to other Asian destinations, but shore excursions in Hong Kong are easily some of the most intriguing ones you will experience as east meets west in this cosmopolitan city. An intoxicating blend of history, culture, culinary finds, and more awaits eager visitors.

Our three-day-two-night cruise went by swiftly, thanks (or no thanks) to the boatload of onboard amenities and activities. The ship provided a detailed daily guide called the Cruise Compass to plan one’s day. However tempting it was to bury ourselves underneath plush sheets, we made sure not to miss highlights unique to the Ovation of the Seas like the skydiving simulator, the North Star, the Seaplex, and the Bionic Bar.

Entertainment for the young ones and young once alike came in the form of Dreamworks parades, nightly shows at the theater, disco parties, sale and auction events at the Promenade, and outdoor movies, to name a few. A favorite among adults was the Solarium as it was less crowded than the outdoor pools. There, one could laze around and sunbathe sans the oppressive heat as the glass-canopied swimming and whirlpool area is maintained at a cool temperature.

Also worth mentioning are the abundant dining options. Whether it’s one of the dressy main dining areas or signature restaurants, or one of the laid-back dining outlets that cater to your cravings any time of day (especially those midnight munchies), each had an entire experience to offer.

When seascape gives way to the cityscape as the vessel nears docking, you’re again left awestruck, just as you were the first time, just as you are every time.