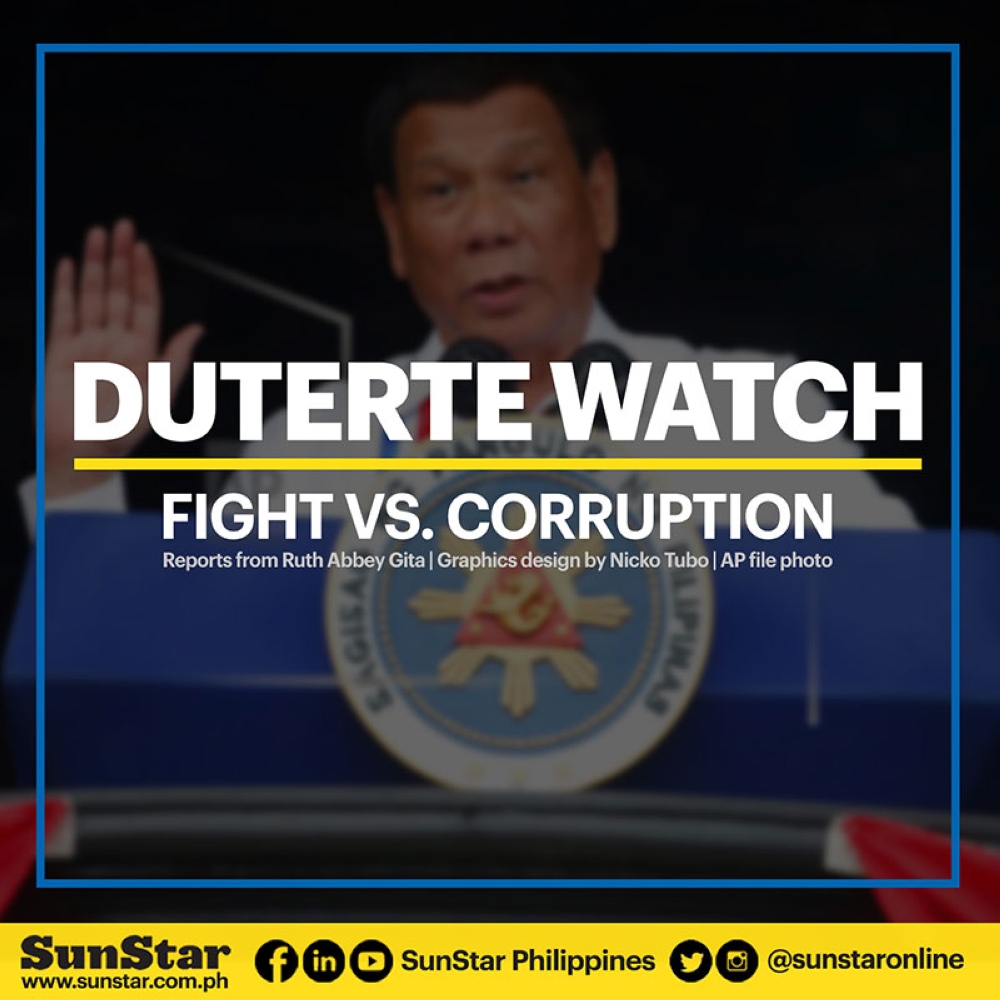 PRESIDENT Rodrigo Duterte's intensified crackdown against corruption in government has expelled and caused the resignation of 29 officials suspected of graft and corruption since July 2016.

Of the 29, six have been re-appointed to new government posts. Most have gone unpunished.

So far, only former immigration officials Al Argosino and Michael Robles have been put on trial for plunder in connection with the P50-million bribery scandal at the Bureau of Immigration (BI).

Presidential Spokesperson Harry Roque Jr. did not respond to SunStar's query on whether the executive department is looking into the liability of the dismissed officials.

But in his June 7, 2018 remark, the Palace official said it was the Office of the Ombudsman's mandate, not the executive department’s, to initiate the filing of cases against the former government executives linked to corruption.

Celestina dela Serna, who was fired as Philippine Health Insurance Corporation (PhilHealth) interim president but retained as a member of the board, was sued on June 6 before the Ombudsman's office. She was slapped with three counts of malversation, falsification, and violation of the Anti-Graft and Corrupt Practices Act.

“The Duterte administration has made significant gains to stamp out corruption and promote good governance in the country. 'Sibak, sibak, sibak' (Fire, fire, fire) has been the President's consistent battlecry with officials, including those holding Cabinet rank not spared from the administration's anti-corruption drive,” Duterte's spokesman said.

The President has vowed not to tolerate even just "a whiff of corruption" and has fired high-ranking officials over supposed questionable deals, excessive foreign travels, and conflict of interest.

At least eight officials were given a graceful exit and allowed to file a resignation letter.

But their exit was followed by Duterte's admission that he asked them to step down from office because of their alleged wrongdoing. 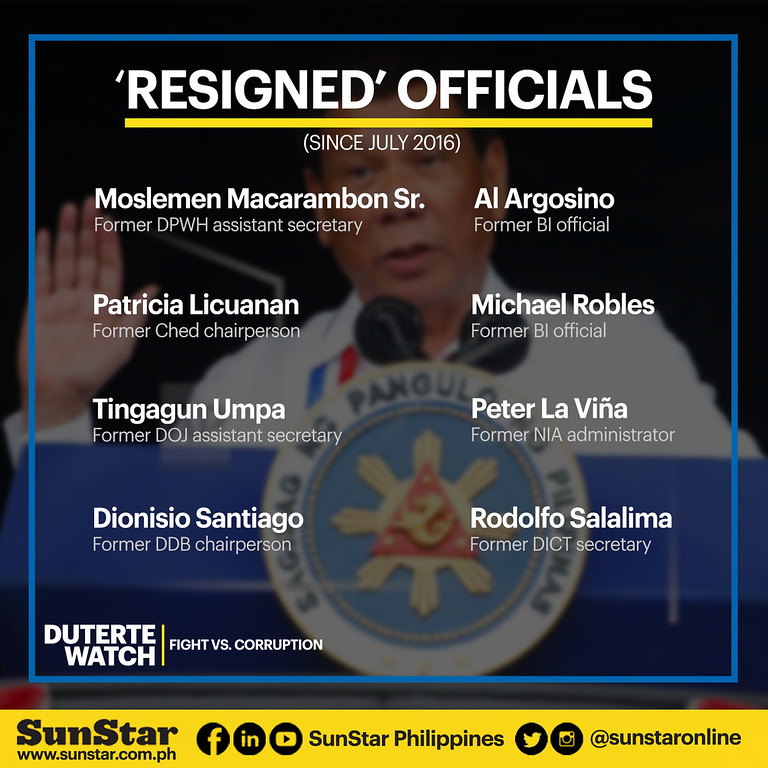 The names of "resigned" but actually "dismissed" officials are as follows:

Argosino and Robles, Duterte's fraternity brothers, quit their respective posts on December 16, 2016 after they were linked to extortion and corruption. A day after their resignation, the President claimed he "fired" them because they were tainted with corruption.

La Viña, Duterte's former presidential campaign spokesperson, revealed in March 2017 that he stepped down from office, following allegations that he pocketed a part of NIA's funds.

Salalima, a former classmate of Duterte at the San Beda College of Law, resigned in September last year because of "personal and work-related" reasons, but Duterte had admitted that he told the former ICT chief to vacate his post because of supposed preferential treatment to "giant" telecommunication firms.

In November 2017, Santiago was asked to resign after his "incongruous" remarks about the construction of the mega drug rehabilitation facility in Nueva Ecija. It turned out, however, that Duterte "let go" of Santiago because of the latter's "junket abroad."

Licuanan announced her resignation on January 15, 2018, following questions on her foreign trips. On the same day that Licuanan quit her post, Duterte admitted "firing" her.

* Tingagun Umpa and Moslemen Macarambon Sr., former assistant secretaries of the Department of Justice and Department of Public Works and Highways, respectively

On May 15, 2018, Umpa and Macarambon were directed to resign, or else they would face termination. Umpa was accused of committing grave abuse of power, while Macarambon was allegedly conniving with suspected smugglers of gold and other precious jewelry.

Other purportedly corrupt officials directly axed by Duterte were:

Sueno was sacked in April 2017 after losing Duterte's "trust and confidence" for allegedly facilitating the purchase of overpriced firetrucks from Austria.

Salazar was dismissed in October 2017 because of "serious dishonesty, gross neglect of duty, and grave misconduct."

De Leon, who worked as the legislative liaison officer coordinating with the Presidential Legislative Liaison Office, was booted out of office in October 2017 over charges of corruption.

Cruz, Amaro, and Prudente were directed to vacate their respective posts in December 2017, January 2018, and May 2018,respectively, for the same reason – frequent foreign trips.

Tolentino was sacked in May 2018 because of his supposed dealings with Duterte's sister. The Palace, however, did not detail the alleged dealings.

* Rudolf Jurado, former government corporate counsel Also in May 2018, Jurado was fired over his supposed bias in granting franchise to gambling firms.

Dela Serna was fired in June 2018 because of her alleged excessive travels and allowances in 2017, despite the PhilHealth's net loss of P8.92 billion.

They were fired in December 2017 because of their alleged "unnecessary junkets" overseas.

La Viña and Valdez were told in February 2018 to "immediately" vacate their posts since the two were both in a "hold-over" status.

La Viña was part of Duterte's communication team for his 2016 presidential campaign. Roque on February 17, 2018 revealed that La Viña's appointment as SSS commissioner was not renewed because the latter demanded nearly P28 million to fund his proposed pet projects and initiated a "vilification campaign” against four SSS officials.

La Viña, in a statement sent to SunStar on Monday, July 16, said that possibly, Roque had “simply misspoken” about the accusations of the former's critics “who spread black propaganda” against him.

He also emphasized that Roque's previous remark was contrary to the assurance he had received on March 1 that “the President does not believe any of the allegations against me.” 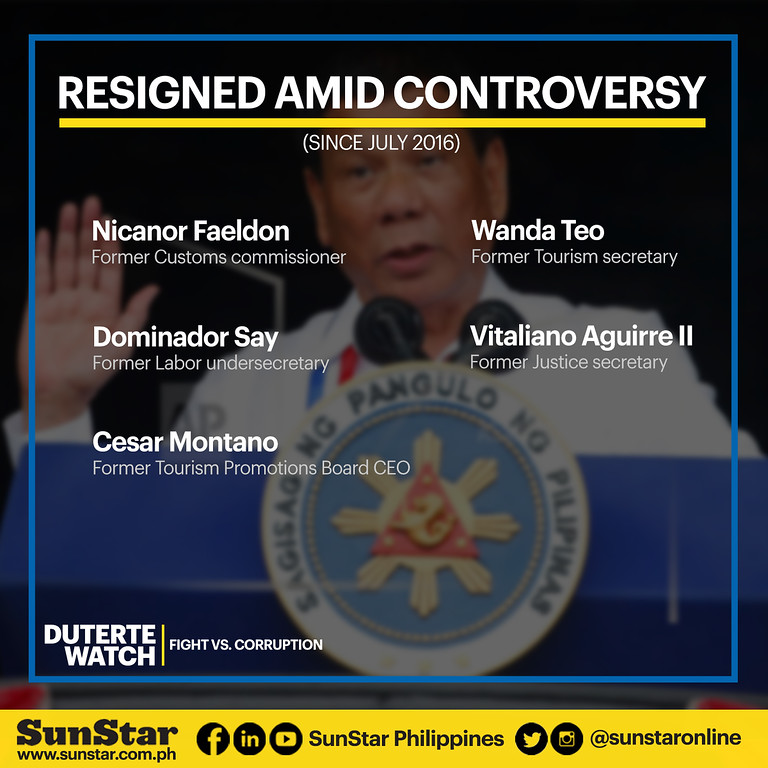 Meanwhile, five government officials mired in controversy have stepped down from office. There has been no confirmation from Duterte whether they resigned from office upon his order.

President Duterte announced on April 5, 2018 that he had accepted Aguirre’s resignation. About two hours later, Malacañang announced the appointment of Menardo Guevarra as Aguirre’s replacement.

Aguirre tendered his resignation amid public outcry over a DOJ resolution that recommended the dismissal of drug charges against alleged drug lords Kerwin Espinosa and Peter Lim. Aguirre had overruled the resolution and reopened the case.

Faeldon announced his resignation in August 2017 following the controversial P6.4-billion shipment of illegal drugs from China that had slipped past the Bureau of Customs.

* Dominador Say, former undersecretary of the Department of Labor and Employment

Say resigned on April 17, 2018. Two days later, Malacañang said Say would have been fired by Duterte for supposed involvement in corruption had he not resigned.

Teo submitted her resignation letter on May 7, 2018, a few days after state auditors questioned government payment to a media outlet owned by her brother. The P60-million payment was for advertisements in a TV program run by Teo’s brothers Ben and Erwin Tulfo.

Montano, an actor who campaigned for Duterte's presidential bid, quit his post in May 2018 following corruption allegations hounding the TBP under his leadership.

Duterte’s critics have, however, thumbed down the re-appointment of government officials who have been sacked. 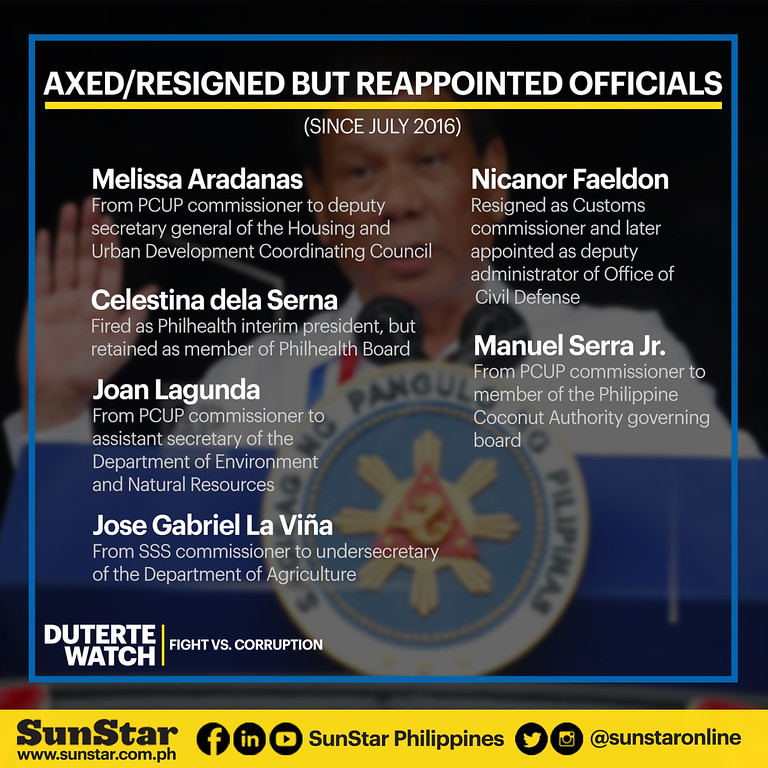 Four officials have been rehired despite corruption allegations hurled against them while one, Celestina dela Serna, was fired as PhilHealth president but retained as board member. Faeldon, who resigned in the middle of the investigation into the shabu shipment from China, was appointed to a new government post.

Aradanas, a cousin of Duterte's long-time partner Honeylet Avanceña, was appointed as deputy secretary general of the Housing and Urban Development Coordinating Council about three months after she was fired. Serra was appointed as member of the Philippine Coconut Authority governing board while Lagunda was named Environment assistant secretary.

La Viña was re-appointed as Tourism undersecretary in April. In June, two months after his reappointment, he was moved to Agriculture department, with the same rank of undersecretary.

La Viña said joining the Duterte government anew despite his having been linked to corruption was a testament that he continues to enjoy the President's “full trust and confidence.”

“When I was invited to meet with the President in Davao, I was ready to answer all the allegations against me, which were nothing but black propaganda circulated by those I charged with conflict of interest, graft, violations of the government procurement law and other offenses before the Office of the Ombudsman,” La Viña told Sun.Star.

“But before I could even begin, the President assured me that he did not believe any of the allegations and that I still had his full trust and confidence. My two subsequent appointments to offices with progressively higher responsibilities is proof positive of this,” he added.

She was retained as board member of the state-run insurer.

Faeldon was named deputy administrator in the Office of Civil Defense in December 2017, or four months after he resigned, amid the investigations into the shipment.

Duterte has remained steadfast in his strong desire to promote a “clean” government under his watch.

“Corruption, it's one thing that is pulling us down aside from the outside extraneous forces of government operations,” said Duterte in an event in Pampanga on July 10. “So in my time, I will try to maybe just reduce it to the barest minimum, if I cannot totally eradicate it.” (SunStar Philippines)