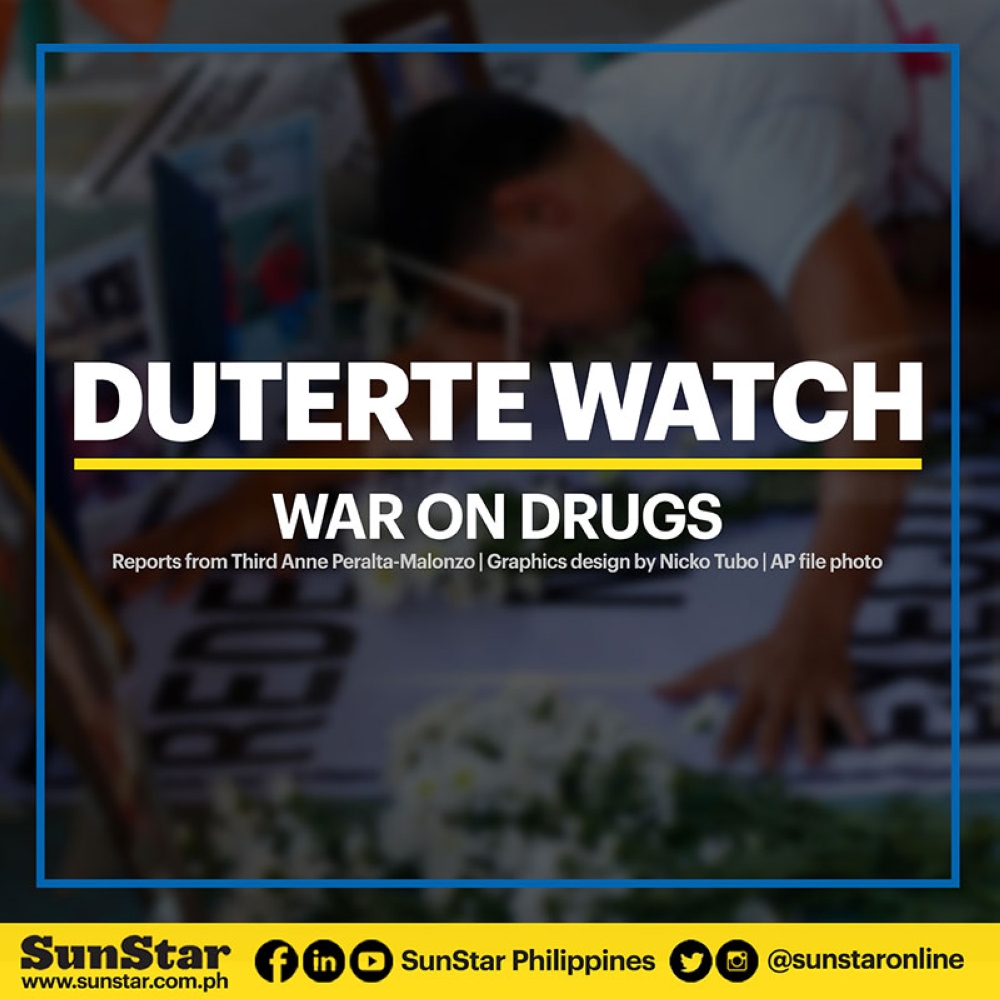 THE government’s relentless crackdown on illegal drugs and crime coupled with the agonizingly slow resolution of cases have led to severe jail congestion.

Detention facilities of the Bureau of Jail Management and Penology (BJMP) were built to hold only about 20,000 persons.

Seven out of 10 detainees, or 71 percent of the total population, are facing drug-related charges. 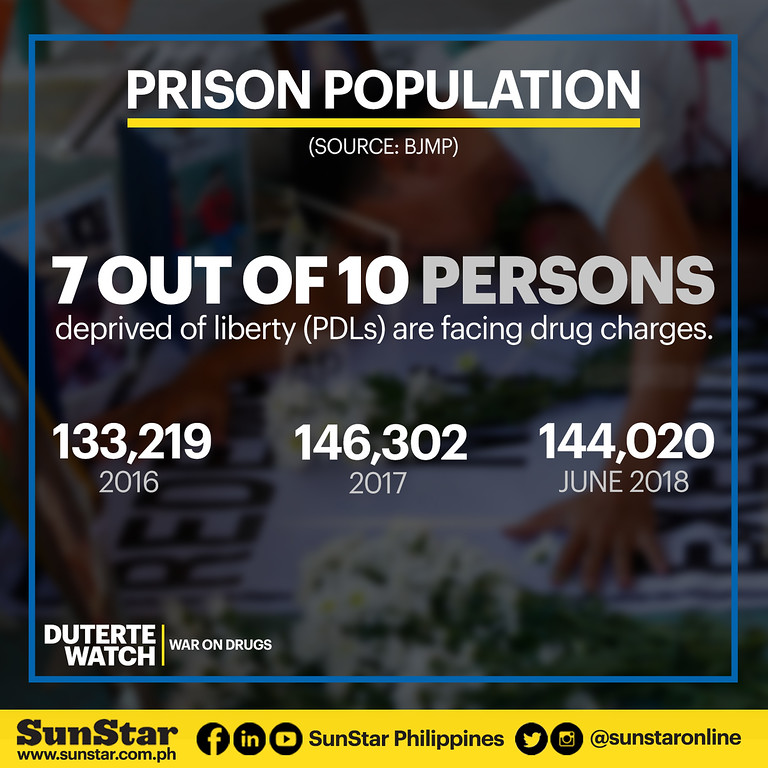 BJMP spokesperson Senior Inspector Xavier Solda said they have a jail congestion rate of 562.41 percent. Congestion eased from the 612 percent reported in 2017, but was worse compared to the 511 percent in 2016.

(Based on the Building Code, there should be 4.7 square meters of personal space per person.)

(We have a 562.42 percent congestion rate, which means that a facility built for one currently holds five to six people.)

According to the government’s #RealNumbersPH, a total of 102,630 anti-drug operations have been conducted nationwide from July 2016 to June 30.

These resulted in the arrest of 147,802 drug personalities, including 229 elected officials, 52 uniformed personnel and 245 government employees.

A total of 4,354 drug suspects have been killed. Police said these were suspects who resisted arrest and fought with the arresting officers.

The Human Rights Watch believes the actual number of fatalities is higher at over 12,000, an allegation repeatedly denied by the administration.

Solda said the severe congestion has affected the health of the detainees.

(Congestion in BJMP jails is just one of the factors for the detainees’ poor health. A lot of them already had health problems before they were transferred to BJMP facilities because of congestion at the lock-up facilities in police stations.)

Solda said the most common diseases of the PDLs are skin and respiratory ailments.

To boost ventilation and minimize the ill effects of congestion, Solda said they are installing additional electric and exhaust fans. Medicines are also being procured in advance.

(We procure as early as December medicines for diseases that we know are prevalent during summer.)

The BJMP has also built 10 new facilities with the help of the national government.

Solda said President Rodrigo Duterte has ordered the allocation of additional funds amounting to at least P3.5 billion since he took office in 2016 for the construction of new detention facilities.

But these are all band-aid solutions as what is really needed to decongest the jail facilities is the immediate resolution of the cases. 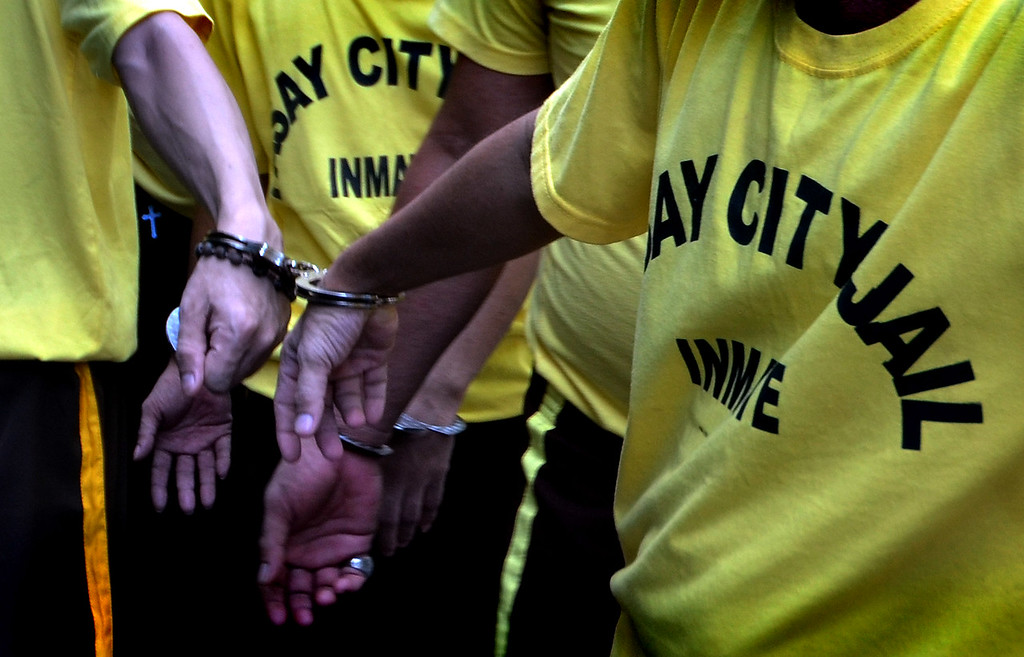 He said for the part of the BJMP, they are strengthening their paralegal system in order for them to coordinate and follow-up the cases of their detainees with the courts especially each’s progress.

He said for now, in order to at least boost the welfare of the PDLs inside their facilities, they have several programs including the conduct of “therapeutic community mentality” seminar to help and teach the PDLs how they can keep positive outlook despite being behind bars.

Solda said they are also in close coordination with the local government units to inform them or make them involved in efforts to improve the welfare of the detainees in their areas of jurisdiction.

“We are eyeing na while they are under our care we could provide suitable programs that would help them somehow to be rehabilitated, para once they are released and reintegrated back to their communities at least somehow ready sila at ang community ready din in fact ito ‘yung nagiging sentro din, para mailapit sila sa community,” Solda said.

“In fact during the Brigade Eskwela last year dinala ang mga sirang upuan sa loob ng mga kulungan at ang mga PDLs ang nag-repair. We have a big challenge on the stigma among our PDL and that is what we are trying to address now by putting them on-board and getting them involve in different community programs, community outreach program. Somehow it gives them pride, hope and new perspective towards the community kasi pag nakakatulong ka na sa community malaking bagay lalo na sa kanila,” he added.

PDEA director Aaron Aquino and PNP chief Oscar Albayalde said the government’s goal to attain a drug-free country will not be a walk in the park.

“No, it’s not a failed promise yet, I just hope magkaroon ng continuity (it will be continued),” said Aquino.

“We are improving on our anti-illegal drugs operations. We have to do the internal cleansing also. Hindi kami pwedeng bumitaw dyan (We cannot abandon this),” said Albayalde.

So, the battle continues. (SunStar Philippines)