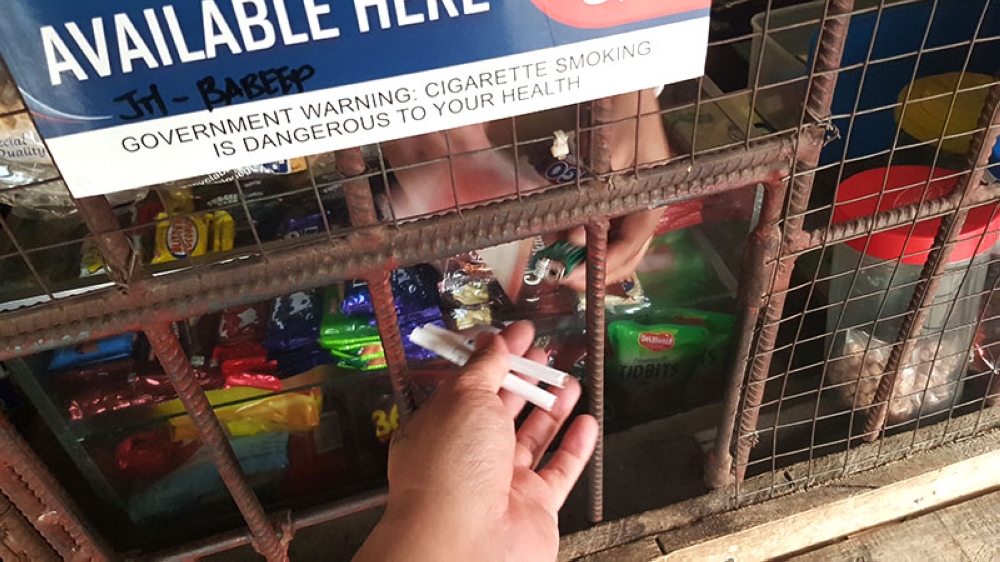 ON MAY 16, 2017, President Rodrigo Duterte signed the Executive Order (EO) 26 that sought the nationwide ban on smoking in public places. A year after, there remains questions and stories to tell, that taking a look of what transpired within the first year of implementation in Northern Mindanao may be a reflective opportunity not only on the efficacy of the EO, but how local governments enforce smoking laws and policies in their own jurisdictions.

Nard Ricalde is a 72-year-old resident of Cagayan de Oro City. He started smoking when he was around 14-16 years old during his time as a high school junior, being a student-farmer of an agricultural-based secondary school.

That time, the reason he smoked was to "kill the time." He said smoking would keep him awake, especially when he started working in industries that required him to work for almost 24 hours.

"During that time, at that age (teenagers), it was likely because of peer pressure. Eventually as time passed, when I started working... usually it's because of people relations," he said in vernacular.

Ricalde did quit for a time -- about four weeks or one month. But he admitted breaking this when pressure from work arose.

At present, he said he has not yet felt any complications related to smoking, but eating less fatty food and other dishes triggers his uric acid, cholesterol, and sugar levels, as these have been advised by the medical doctor when he had a check-up last year.

Ricalde is just one of the many Filipinos who have been smoking tobacco or cigarette.

"The prevalence of current cigarette smoking among adults significantly decreased from 27.9 percent in 2009 to 22.5 percent in 2015," the report said.

Despite the decrease in tobacco use prevalence, the Philippines is still second, next to Indonesia, with most number of adult smokers, according to the November 2016 report from the Southeast Asia Tobacco Control Alliance (Seatca).

Based on its third quarter report, there are 122,420,858 adult tobacco or cigarette smokers within the Association of Southeast Asian (Asean) region. While Indonesia topped at 55.3 percent, the Philippines followed with 13.5 percent, and then Vietnam at 12.7 percent. This means that there are around 16.5 million adult Filipinos who are smokers just like Ricalde.

Dr. Ulysses Dorotheo, Seatca's program director in the Philippines, explained the disparity of statistics relating to the number of people involved in smoking in the Philippines and Indonesia. One reason is the geographical size of the two countries, which also means the difference in population size.

Dionisio "Loloy" Azcuna Jr., 70, still remembers how affordable a cigarette stick was years ago. This, he said, was one of the factors that made him a chain smoker for about 30 years. He started smoking when he was around 13 years old and would smoke at least two cases of cigarette in average over the years.

"Back then, it was 10 cents per stick, until around 1990s, it's sold for P1 per stick. Eventually, I became a chain smoker - I can't sleep if I can't smoke. I smoke when I eat, or even just about going to the bathroom to urinate," he said.

Eventually, his smoking habit took a toll on his health. He said he was diagnosed with severe cough that he had to administer "broncho injectable" medicines. He was already advised to stop smoking but it was not that easy at first.

Had it not been for a health seminar he attended, which was organized by the Seventh-Day Adventist church (of which he is now a member), he would not have stopped smoking up to this day. It was in 1991 when he finally decided to quit.

According to the Global Adult Tobacco Survey, about seven in 10 (76.7 percent) tobacco smokers in 2015 were interested or planning to quit smoking. It estimated that 19.3 percent quit smoking, while four percent of those who smoked in the past 12 months recently quit smoking. This makes Azcuna's case not uncommon at all.

"However, the proportion of smokers who successfully quit in the past 12 months largely remained unchanged from 2009 (4.5 percent) to 2015 (4 percent)," the report added.

From Seatca's 2015 report, the number of Filipinos, aged 15 and above, who attempted to quit in the last 12 months had an average total of 52.2 percent, wherein 51.5 percent were males, and 57.1 were females. The data did not, however, specifically revealed the total number of individuals from which the percentage was derived from.

"As of October 2016, all 10 Asean countries will have graphic health warnings on tobacco products, four of which are among the largest warnings worldwide: Thailand (85 percent coverage) and Brunei, Laos and Myanmar (75 percent). This is a major victory in tobacco control for the whole region. Graphic warnings are proven to reduce the number of young people who start smoking and increase the number of quitters," said Mark Suzman, president of Global Policy & Advocacy in Bill & Melinda Gates Foundation.

Like any teenagers, Francis (name withheld), 17, started smoking when he was 15 years old. None of his family members were smokers. He said he was not even told to buy cigarettes in nearby stores by some older neighbors or relatives in his community.

It started when he was schooling at a public high school, where all of the boys in his classroom, around 10 of them, were casual smokers. Although stores that sell cigarettes were a walking distance, he said he often see other students -- his schoolmates from other sections or year level -- gathering during breaks (some were cutting classes) and puffing a few sticks.

"I was reprimanded. They told me to stop smoking because it is not good," he said, after his parents knew about his smoking habit. From school, he learned to smoke even from his neighborhood, and for a time, he would smoke up to five sticks a day.

Although he is planning to quit, he could not say when he is going to stop. He said that at least for now, he is trying to lessen the number of sticks he consumes in a day. He also admitted that there are times when he yearns to smoke, especially after eating his meal.

The 2015 Philippines Global Youth Tobacco Survey (GYTS), a component of the Global Tobacco Surveillance System (GTSS), surveyed a total of 8,789 people throughout the country who were all students belonging to grades 7 to 10. A total of 5,885 were aged 13 to 15 years, just like Francis when he first smoked (Male: 2,564, Female: 3,321).

Of these numbers, GYTS found out that 79.4 percent of students who smoke cigarettes bought these items from a store, shop, street vendors, or kiosks, and 47.5 percent were not prevented from buying cigarettes, despite smoking laws that ban minors from buying.

In addition, around 10.9 percent reported that the student-respondents' usual smoking place was in school, with 35.9 percent admitted that they had showed signs of smoking dependence.

Meanwhile, in an identical but separate survey conducted by the Global School-Based Student Health Survey (GSHS) in the same year, part of its results showed that males (18.4 percent) were more likely to use any tobacco product than females (11 percent), and the males (15.8 percent) were almost twice as likely to smoke cigarettes as females (8.6 percent).

"Among the students who currently smoked cigarettes, almost 9 out of 10 (88 percent) tried to quit smoking. The same proportion was reported for both males and females (88.2 percent)," the report said.

The bigger figures of this survey showed that one in every two high school students aged 13-15 was exposed to cigarette smoke. More than half (50.8 percent) of the students reported that people smoked in their presence in the past seven days before the survey was conducted in 2015. Again, the males (53.9 percent) were more likely to be exposed to secondhand smoke than females (47.9 percent).

GSHS was a collaborative surveillance project designed to help countries measure and assess the behavioral risk factors and protective factors in 10 key areas among young people aged 13-15 years old. It surveyed around 8,761 students, out of the desired 10,361 sample size throughout the country. Both GYTS and GSHS are conducted every three to four years.

Lawyer Frances Margaret Aparte, is a first-time municipal councilor in the town of Mambajao, of the island province of Camiguin. She just won the seat in the 2016 elections. Prior to that, she was the provincial legal officer.

On May 21, 2018, she had a scuffle with someone who was "not in town, let alone in the province." The reason: the unidentified man was smoking near a beach.

Little did this man know that Aparte was an elected official, let alone a lawyer, as he allegedly mocked the councilor for verbally warning him about the smoke ordinance that prohibits smoking even in coastal areas or beaches. To add insult to injury, the man allegedly continued smoking near Aparte, who is seven months pregnant.

Eventually, the man was apprehended by police and detained for violation of anti-smoking laws and ordinances.

Aparte's story went viral on Facebook after she shared her experience that day. Her post garnered more than 26,000 reactions, and 6,500 shares.

A reminder to everyone, especially those who are NOT from Camiguin: If you do not want to go to jail, PLEASE RESPECT...

Posted by Frances Margaret Aparte on Sunday, May 20, 2018

In 2010, the municipality of Mambajao passed an ordinance that regulates tobacco smoking. When Aparte was elected as town councilor, she said the council moved to revise the old ordinance and added some provisions that adopts existing national laws, including international laws on protection of minors.

The revised ordinance "regulating the use, sale, distribution, and advertisement of any cigarette or tobacco product, imposing penalties for violations thereof and providing funds therefore and for other purposes," was approved on October 2, 2017.

"Any person can take picture of anyone smoking a lighted cigarette and report it to any enforcers. We give reporters (citizens reporting of any violations) reward too," she said.

Aparte said that in November and December last year, they began an information campaign on the ordinance which included the posting of anti-smoking signage. In January 2018, the strict implementation started.

"To make our ordinance strong, we created a task force and provided provisions on the enforcement, including mandatory attendance in smoking cessation programs. All PNP (police), barangay captains and tanods (community peace and order officers), public safety and order officers, elected officials, are all member of the task force," she added.

She also emphasized that all members of the task force are non-smokers. (SunStar Philippines)
< Previous PageNext Page >