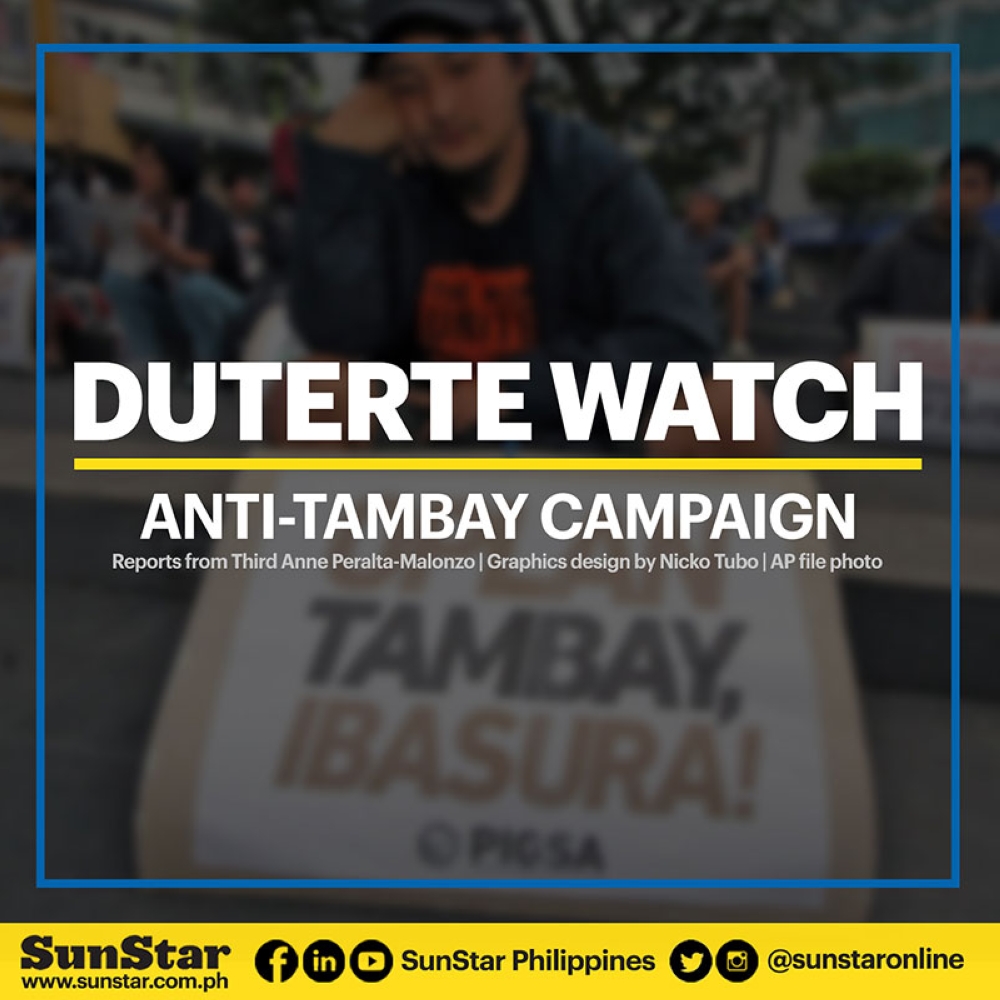 (Part 3 of Duterte Watch, a SunStar Philippines special multimedia report on the Duterte administration’s fight against corruption, war on drugs, anti-tambay campaign and the alleged economic fallout from these crackdowns. Read Part 1, Part 2, and Part 4)

THE government’s anti-tambay campaign, aimed at deterring crime and making the streets safer especially at night by clearing these of loiterers, caught the nation by surprise.

Human rights activists protested, saying the campaign is reminiscent of the fascist tactics employed during the martial law regime.

But President Rodrigo Duterte, who has dubbed “tambays” or loiterers as potential troublemakers, said the campaign is not new and merely implements existing local ordinances.

The Commission on Human Rights (CHR) has launched an investigation into some of the cases, according to spokesperson Jacquelyn Ann de Guia.

One of these cases is the death of 22-year-old Genesis "Tisoy" Argoncillo, who died while under the custody of the Quezon City police.

Argoncillo was arrested on June 19 for going outside shirtless, according to his family and neighbors. Police, on the other hand, said he was arrested for alarms and scandals.

Argoncillo died after he was mauled by his fellow inmates inside the Quezon City Police Station 4 in Novaliches.

De Guia said the CHR is investigating the regularity of the arrest of Argoncillo.

The agency is also investigating whether or not Argoncillo has violated a city ordinance and is also looking into the treatment of the police while he was under custody.

Under the 1987 Constitution, there are two modes by which the CHR can take cognizance of a case. One is through the filing of a complaint and another is through a motu proprio investigation.

In the case of Argoncillo, it was the CHR which initiated the probe. 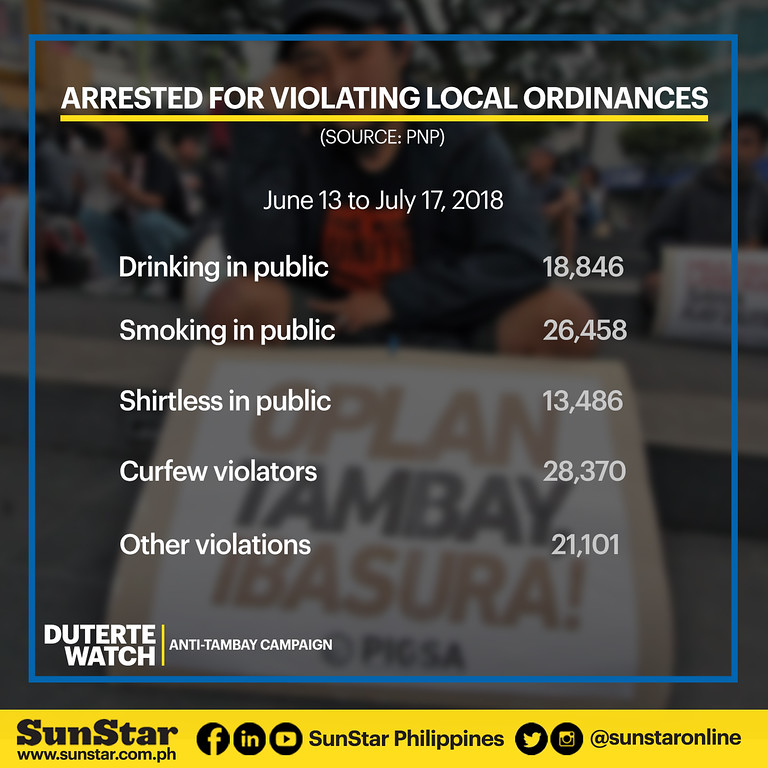 Of the 108,261 arrested since Duterte gave the order on June 13 until July 17, 18,846 were apprehended for drinking in public, 26,458 for violating the smoking ban in public places, 13,486 for going on the streets without upper clothing, 28,370 were minors who were caught violating curfew hours in their areas while the 21,101 were arrests for violating other ordinances such as getting involved in trouble, riot or gang wars and “stoning” or throwing stones usually targeting passing motorists.

Of the total number of persons apprehended for violating local city ordinances, 52,358 were from the National Capital Region Police Office (NCRPO).

The three regions which have the most number of arrests were Central Visayas with 15,089 arrested persons, Mimaropa (Mindoro, Marinduque, Romblon and Palawan) with 10,394 and Central Luzon with 9,024 apprehensions.

But only 16 were charged and remained under police custody. The others were either warned, fined and released, or charged but temporarily released.

Eleazar said 8,472 minors were “rescued” after being caught violating curfew hours. They were turned over to their parents or guardians after undergoing counseling.

Eleazar said majority of those who are being apprehended for violating local ordinances are not jailed or charged.

Among the most common local ordinances in Metro Manila cities and municipalities are the following:

Prohibiting drinking of intoxicating liquor and beverage in any public place, building and cemetery anytime of the day or night

Prohibiting naked persons from displaying or roaming around in public places

Minors are not allowed on the streets from 10 p.m. to 5 a.m. unless they are with their guardian or parents. Penalties (depending on the locality) will be imposed on the parents or guardian.

The parents or guardian of minors will be referred to nearest barangay hall or police station where children and parents will undergo counseling. Their penalties are: 1st offense, 48 hours community service or a fine minimum of P500; 2nd offense, 72 hours community service or fine minimum of P1,000 to P3,000; and 3rd offense, fine maximum of P5,000 and/or imprisonment of six months.

A habitual violator will be turned over to social services development department for counseling and will be subject for intervention program.

Prohibits barker in any place not designated as terminal of buses, jeepneys, taxi cabs or tricycles

Prohibits selling, giving or sharing any type of firecrackers to children.

The penalty is imprisonment for one year or a fine of P5,000 or both depending on the discretion of the court.

The penalty is cancellation of business or mayor’s permit to operate.

The penalty is a minimum of 10 days of imprisonment. In the case of a government employee, the appropriate administrative charge shall made with the penalty of suspension from office for a minimum period of three months without pay if found guilty.

However, there were also ordinances which is only being implemented in several areas such as that of which prohibits two men from riding together in a motorcycle.

In Quezon City, the police are implementing local ordinances that prohibit: infants and/or children 6 years and below from sitting in the front seat of any running motor vehicle; and carrying of deadly bladed or pointed weapons in market place store, stalls, slaughterhouse, café or restaurants except of persons employed as butcher, cook, laborer meat or fish vendor hired helpers engaged or in the performance of their work.

The city also bans the use or play of firecrackers and pyrotechnic devices in all public places including streets, roads, alleys, thorough fares open space, plaza parks, basketball court and other similar places.

Another prohibition is the selling and/or buying of admission tickets outside authorized official booths.

In Las Piñas and Muntinlupa, there is an ordinance prohibiting the use of a motor vehicle that produces excessively loud and disturbing noise particularly from mufflers.

Just like the war on drugs, the government’s anti-tambay operations have put the Philippine National Police (PNP), the main agency tasked for its implementation, in a bad light particularly after the death of Genesis Argoncillo and the alleged “careless” way of apprehending the violators.

In Makati, a group of friends were suddenly arrested by the police and detained for several hours.

The netizen which posted their experience on Facebook said they were just waiting for their friend outside his house and were on their way to a party when they were suddenly approached by the police and asked to go with them at the station.

They were later released after police established that they were not part of a group suspected of drug charges.

A CCTV (closed circuit television) footage which also went viral showed a man without upper clothing who had just stepped out of his house when he was arrested by the police.

Such incidents have instilled fear among the public.

PNP chief Oscar Albayalde, in a bid to allay fears over the anti-tambay campaign, has ordered police commanders to guide their men to avoid unnecessary arrest and to ensure that all police personnel are performing their responsibilities in accordance with the existing Police Operational Procedures and with due regard to the human rights and dignity of apprehended individuals.

Department of Interior and Local Government (DILG) undersecretary for barangay affairs Martin Diño said the barangay officials should lead the operations against violators of city ordinances.

(This is what happened during martial law. Loiterers are being arrested.)

Zarate said the parallelism between the Marcos and the Duterte regimes are becoming more evident.

Former CHR chairperson Loretta Ann "Etta" Rosales, herself a victim of abuses under the Marcos dictatorship, recounted that "during the martial law days we have the curfew and if you are not at home and if you are not inside your house at a certain time which is 6 o'clock or so aarestuhin ka, talagang huhulihin ka even without a warrant of arrest."

During the martial law there is no due process of law nor were there any rules and regulations. Arrested individuals were not even given the right to counsel, she said.

"Ako nga nung tinorture ako, there's no warrant of arrest, there's no search warrant. Ang sinabi nga sa akin noon, walang nakakaalam dito sa'yo, not even President Marcos so we can do with you what we want. We can kill you and President Marcos will not know," Rosales recounted.

Asked if the recently-declared war against tambays might lead to the declaration of martial law, Rosales answered: "the more appropriate term would be dictatorship."

Rosales said she believes that the campaign would lead to Duterte's authoritarian rule.

"Lahat ito patungo doon. In fact, ginagawa naman na niya," she said. (Everything leads to it. In fact, it is already being done.)

National Union of Peoples Lawyers (NUPL) Chair and former Bayan Muna representative Neri Colmenares, for his part, believes that the arrest of tambays "could lead to [martial law]."

Colmenares, also among those who suffered abuses during the term of Marcos, bared that under the Consultative Committee's proposed federal charter, "lawless violence" is a new ground for the declaration of martial law.

This means it will be easier for the present administration to declare martial law with the new federal constitution, he said.

Aside from the pending investigation separately being conducted by the CHR and local rights group Karapatan, congressional inquiries into the anti-tambay campaign have also been sought by lawmakers from the Senate and the House of Representatives.

Opposition Senator Paolo "Bam" Aquino IV filed the resolution before the Senate while the Makabayan bloc filed a similar resolution at the House.

These resolutions have yet to be acted upon as the Congress is now in recess. (With Keith A. Calayag/SunStar Philippines)