Down south, down under: Mindanao arts go to Australia 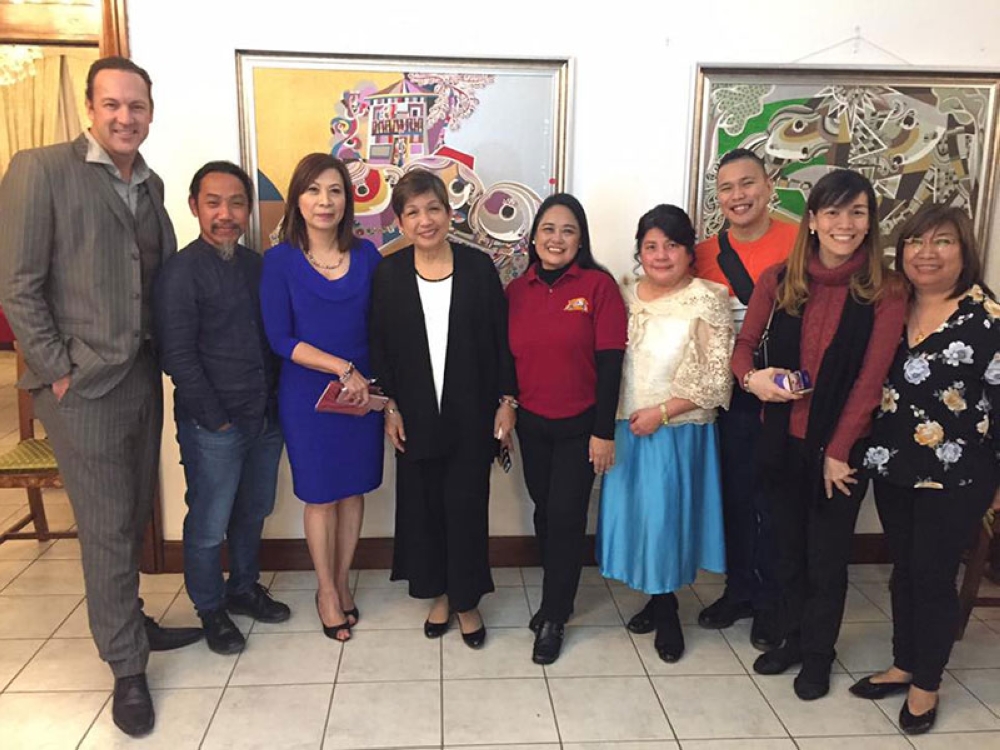 AUSTRALIA. Friends old and new. Among those who graced the exhibit were (from left) Scott Pohibun, Kublai Millan, Cecille Flores, Ambassador Mindy Cruz, Dr. Mae Dolendo, Hildegarde Palafox, Rojim Sorrosa, Cheryl Gomez, and Lilibeth Arcena. At left are some of the paintings that raised funds for children with cancer of the House of Hope Foundation. (PH Embassy) 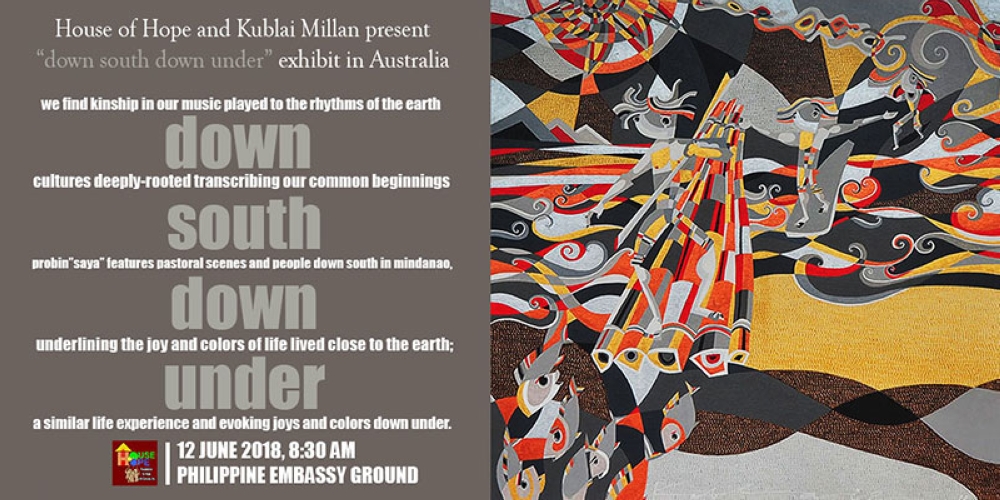 AUSTRALIA. Down South. The invitation to the fund-raising exhibit. (Contributed photo) 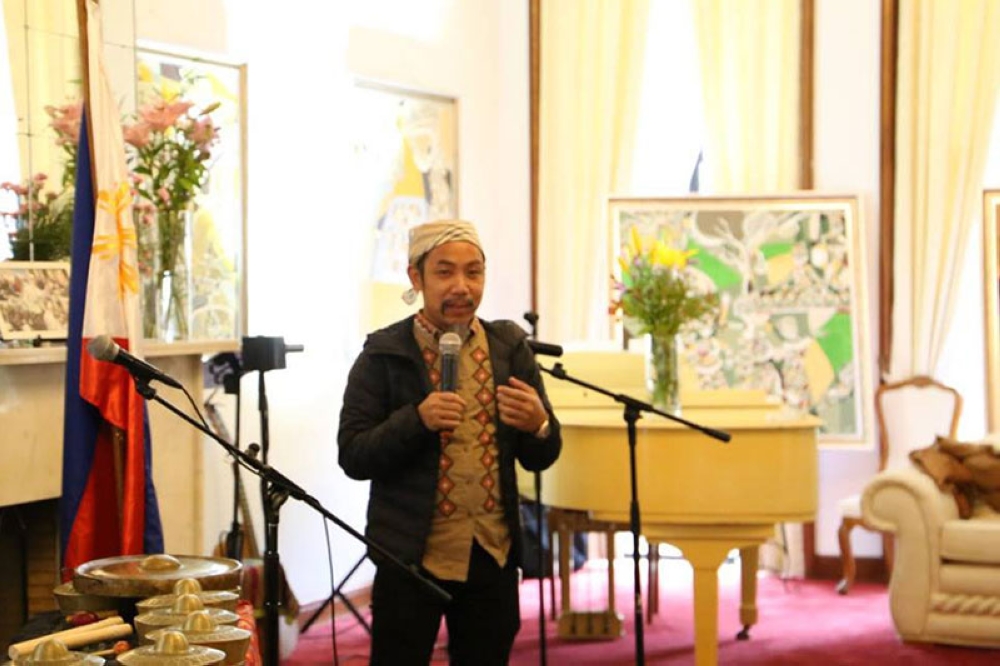 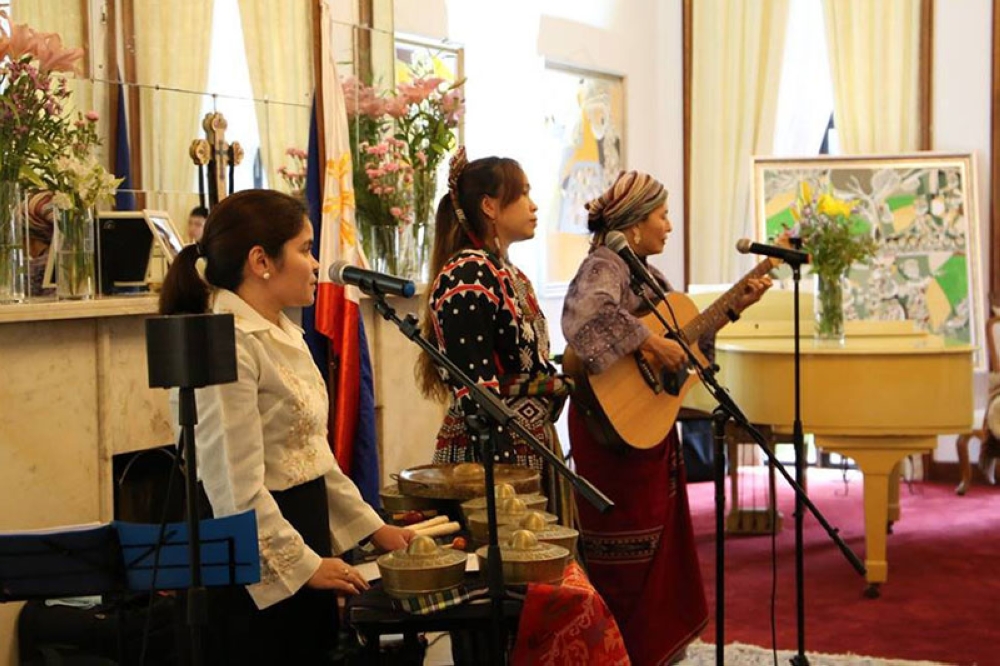 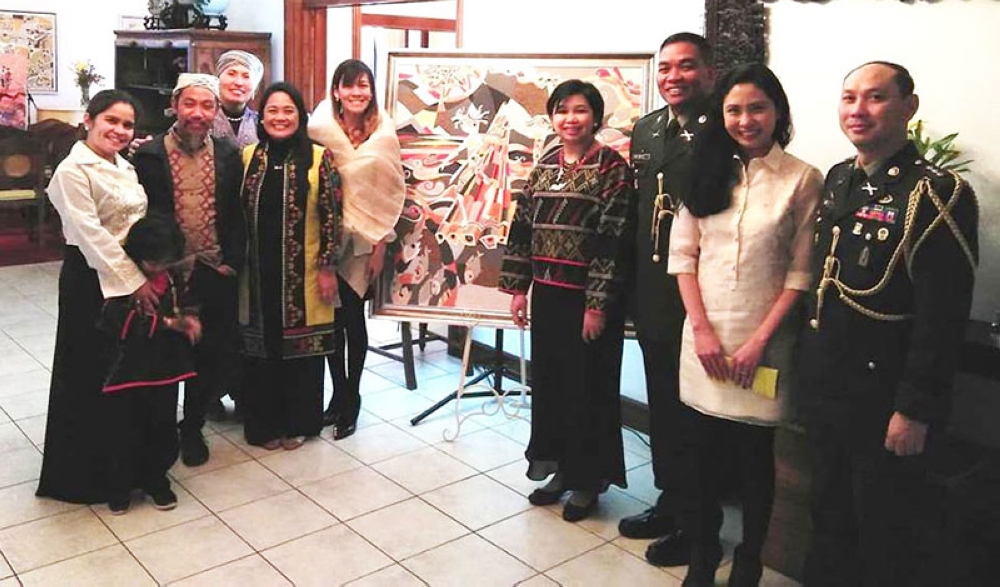 AUSTRALIA. Celebrating independence. Posing with one of the 4'x4' paintings of Kublai. (Contributed photo)

AUSTRALIA. Mindanao and Philippines. The Mindanao artists represented by Mebuyan and Kublai Millan and the Filipino performers during the Philippine Independence Day Celebration in Canberra. (PH Embassy)

“WE find kinship in our music played to the rhythms of the earth. Cultures deeply-rooted transcribing our common beginnings. Probinsaya features pastoral scenes and people down south in Mindanao, underlining the joy and colors of life lived close to the earth; a similar life experience evoking joys and colors down under.”

These are the words written on the invitation card announcing the exhibit of Davao artist Rey Mudjahid “Kublai” Millan at the Philippine Embassy in Canberra, Australia.

The exhibit held last June was a confluence of events and friendships that brought Mindanao arts to the consciousness of the Filipinos in Australia as well as the Australians, and, as Millan said, “they want more”.

“Its success was in being able to open the eyes of the people there to Mindanao culture, it was double purpose,” he said.

Organized to raise funds for the House of Hope Foundation, which provides for children with cancer at the Southern Philippines Medical Center Cancer Institute, Down South, Down Under was also organized to bring Mindanao down under.

“I was introduced as an artist who is putting up all these monuments all over Mindanao to be able to express who we really are and in the process am able to interact with the tribes and tell their stories. Now I have the chance to help the children with cancer,” he said.

Millan has been helping bring color to the Cancer Institute and House of Hope over here, and through pediatric-oncologist Dr. Mae Concepcion Dolendo, linked up with Philippine Ambassador to Australia Mindy Cruz to set up the exhibit, which came with special performance by Davao's all-women band Mebuyan, represented by Maan Chua, Gauss Obenza, and EG Subido-de Guzman.

The link between Dolendo and Ambassador Cruz itself was brought by a shared compassion for cancer patients, the ambassador having lost a daughter to cancer. In fact, the people actively raising funds for the foundation is called Ambassadors of Hope, as inspired by Ambassador Cruz.

As earlier revealed by Ambassador Cruz in a separate email interview about House of Hope, she first met Dr. Dolendo when she came to see her at the Philippine Embassy in Singapore, when Cruz was still assigned there, at the end of Dolendo's Fellows Training at the National University Hospital in Singapore in 2003 to share her plans about pediatric oncology at the erstwhile Davao medical Center, now SPMC.

“She said she wanted to make the best out of what she learned in her training for the children in the Philippines, especially in Mindanao. It was a well-thought of project she presented to me,” Cruz said. “Since we share the love for children and the vulnerable, I agreed to help in whatever way I can. “

From then on, a bond has been established.

From just a fund-raising activity, as collective efforts geared only for the good of those who have the least in life, the exhibit became a full showcase of Mindanao colors, scenes, ideas, and music.

During the program, Kublai shared his work with local municipalities in putting up monuments and the positive social and economic changes as a result. His exhibit in Australia is in support of the House of Hope Foundation for Kids with Cancer in Davao.

Mebuyan, an all-women group, performed original songs weaving Filipino folk and indigenous traditions with contemporary music, creating a joyous musical atmosphere in the Independence Day celebration. The exhibit of Kublai and performances of Mebuyan were made possible by Cebu Pacific Air, House of Hope Foundation for Kids with Cancer, Mr. Miguel Ayala, Special Envoy of the Philippines to Australia and the Department of Tourism of the Philippines, the embassy post continued.

“This was a good eye-opener for the people in Australia dahil their exposure is always on Manila art. We were able to show Mindanao's diversity and raised the discussion to Mindanao issues like peace and the still ongoing conflict,” Millai said.