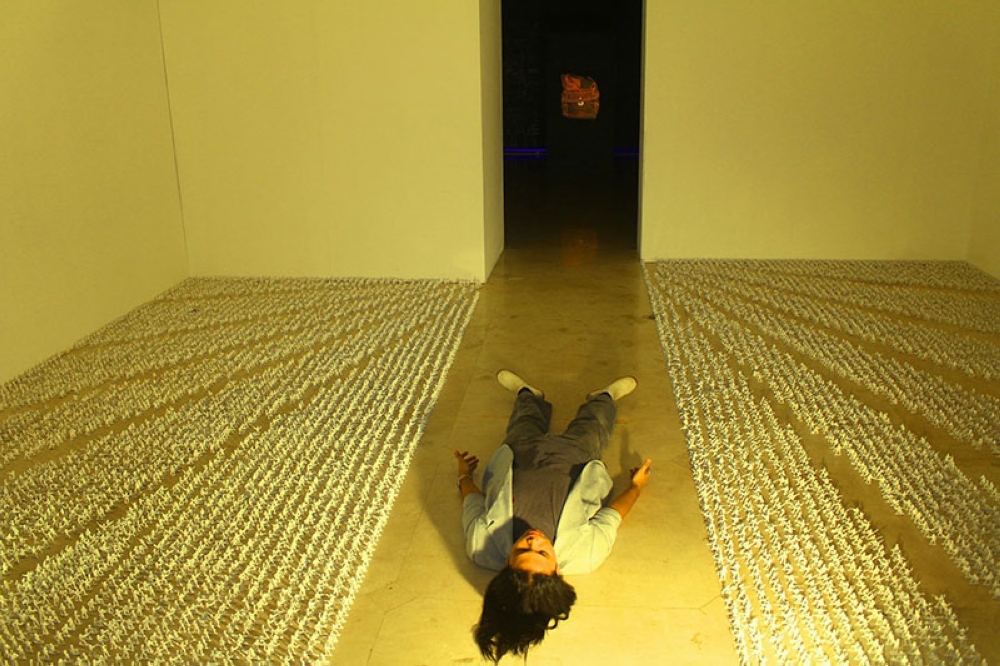 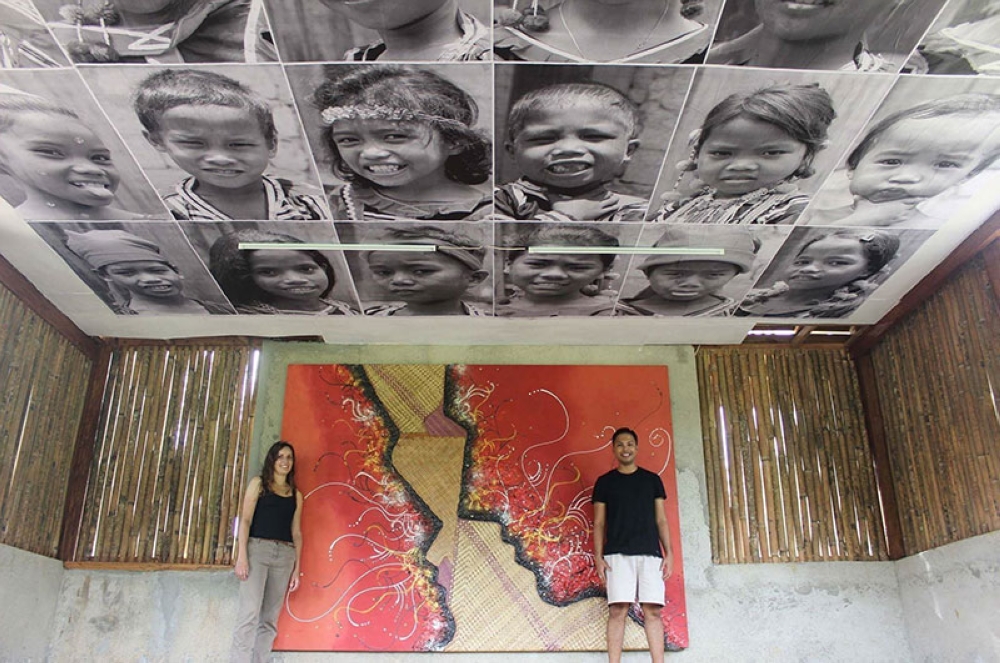 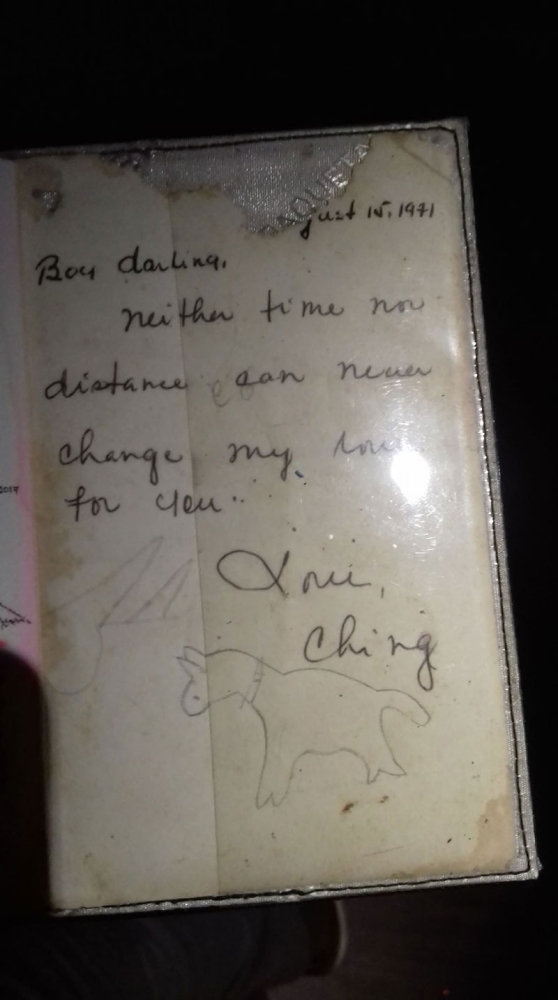 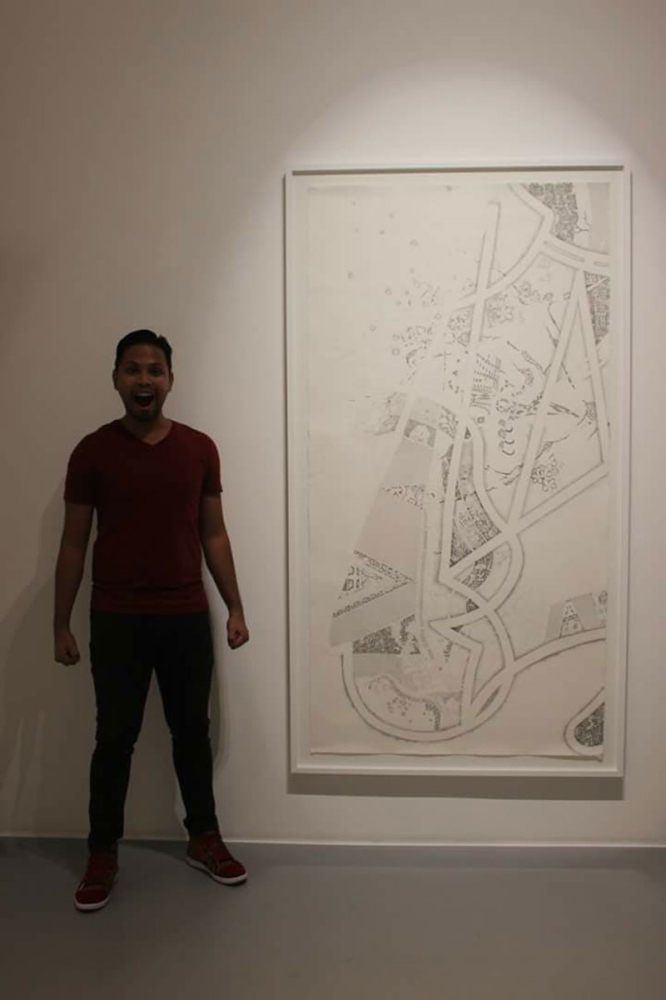 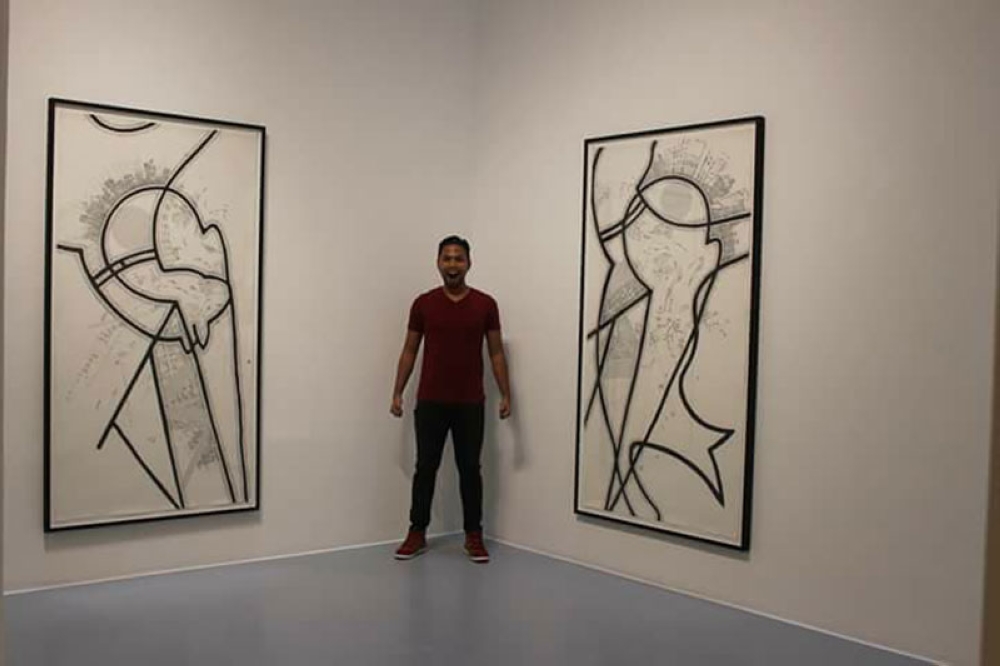 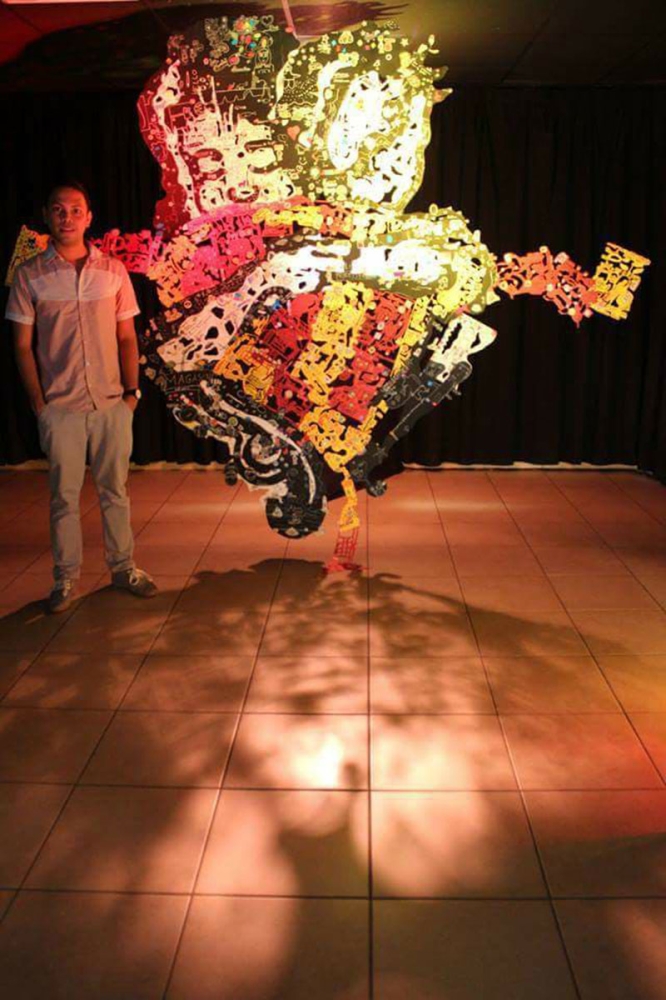 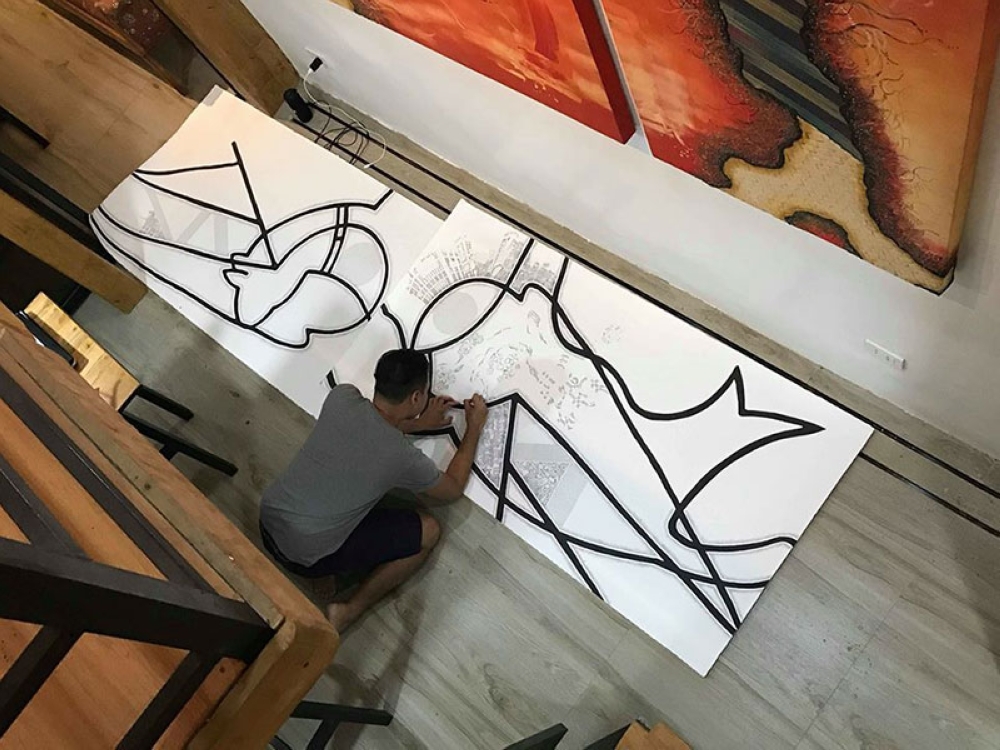 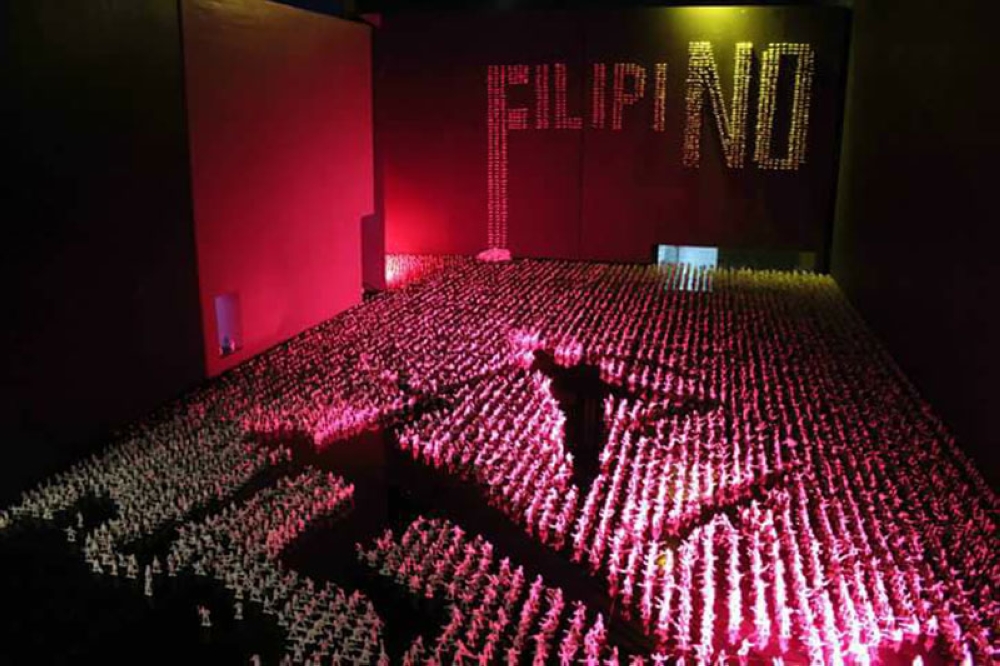 EVEN at a young age of 4, Louie Talents has exhibited manifestations of his knack for the art, a dream that eventually materialized.

However, in his childhood days the world was not kind to him. His father died when he was 10 years old. In his youth he experienced rough times in school and even vomited blood due to excessive intake of alcohol, a feat that resulted to him staying at home to recover.

But it was not until he saw his grade school year book that young Louie was reminded of what his childhood dream was.

And this drove him to continue with his art, his childhood experiences now an inspiration for the exhibits and art projects he has conducted in different countries.

"The process is about my childhood again, in my growing years. I was always scolded and the teacher would ask me to stand in the corner and face the wall. It was that experience that I notice the crack on the cement and I would trace them with pen (pointillism) using dots and paste stickers on it," Louie said.

"So I came back to the experience and paste back stickers of names of people I wanted to thank and people I met in my travels," he added.

Louie, an internationally-known Kagay-anon contemporary artist, has done several exhibits and art projects in 19 countries and at present, he has a solo exhibit of his visual diary artworks in Pierre-Yves Caer Gallery in Paris, France.

The art exhibit is titled "Carnet Sans Age" or "Diary Beyond Age" which runs from July 7 to 28.

The works showcased in the exhibit was inspired from his personal experience during his stay in Japan and the love letter his mother created addressed to his late father.

"I start with a concept or idea and then I think of the medium after of what would be the best medium to connect my work with the audience and then I draw or take memories of my childhood to make the works personal," Louie said.

In fact, according to Louie, the exhibit in Paris is his response to the love his mother, who died last year, gave to him.

"I found her love letter and it started the idea of this exhibit. It was a love letter of my mom to my father and in that love letter I found my early drawing. I think I was 4 or 5," Louie said.

"This exhibit was inspired from that love letter. If you notice, the two drawings I did in that letter (a geometrical form and an animal), I use those two elements and juxtapose them to create the general image of the work. And the detail is about my personal experience after staying in Japan," he added.

Louie also did an art collaboration with French kids and Manobo children from Bukidnon, with fighting for children's rights as their concept.

"The work is fighting for children's rights or raising public awareness that a child should have access to education regardless if the child belongs to a developing country," he said.

At present, his ultimate goal is to complete with his travel to 40 countries, hoping it will bring possible new ideas and experiences to him.

And in 2010, he received a French Embassy scholarship grant to study at L’école des Beaux-Arts in Paris, France.

Louie is also a multi-awarded artist, receiving recognition such as: award of Merit by the Philippine Art Awards, Lamabago Art Award in 2016 by the Xavier University Center for Culture and the Arts, Outstanding Thesis Award in 2011 by the UP Diliman-College of Fine Arts, and among others.

And now, Louie is a fulltime artist working his way between art projects and art exhibits.

"When I work with an art project, I usually send proposals to organizations and institutions to provide me the funding that I need. Normally everything is paid, travel expense, stay and all. It also helps me provide for my travels as I travel a lot," Louie said.

"As to solo exhibit, this is where I sell artworks. This also provides the fund I need to start an art project. There are also commission works from collectors. This is where I get the fund also to provide for my research for possible new works," he added.

Years of being an artist did not exempt him from making mistakes and receiving criticisms. According to Louie, he did a lot of mistakes and failures such as new ideas not working out which leads him to starting everything from scratch.

Despite the mistakes and criticisms, this did not stop Louie from continuing to do what he loves.

"Embrace the mistakes. Take it humbly and rise up. The important part is how you respond. Positive outlook and positive vibes helps a lot," Louie said.

"I embrace them with an open mind, especially the negative ones. I listen to them carefully and see if what they are saying is an objective criticism. It’s part of it, especially on art projects where I am trying to raise public awareness and all, I respond with a new work," he added.

It is also Louie's belief that art has the "capacity to change the lifestyle of people and make them rethink and re-evaluate positions on issues."

"It is my hope and intent that through raising public awareness in my art projects. It would bring them closer to respond in their own perfect way," Louie said.