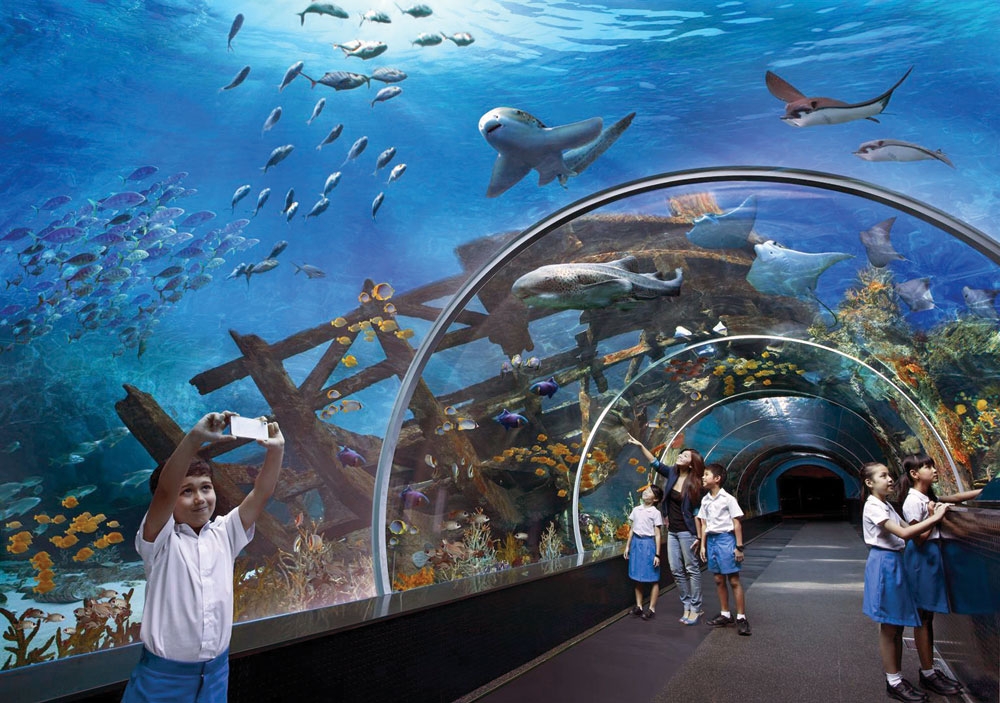 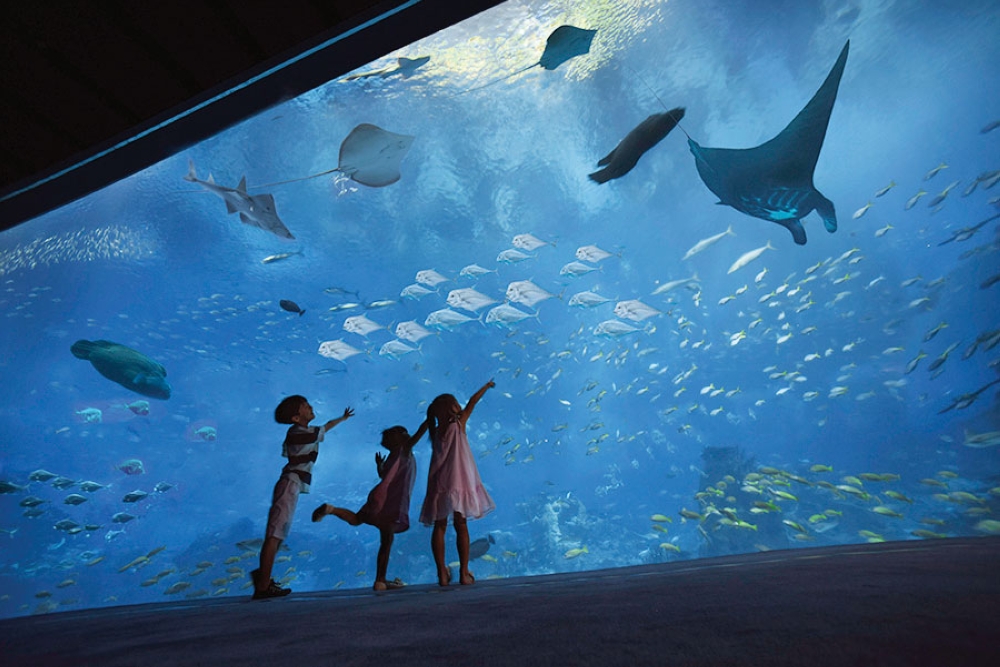 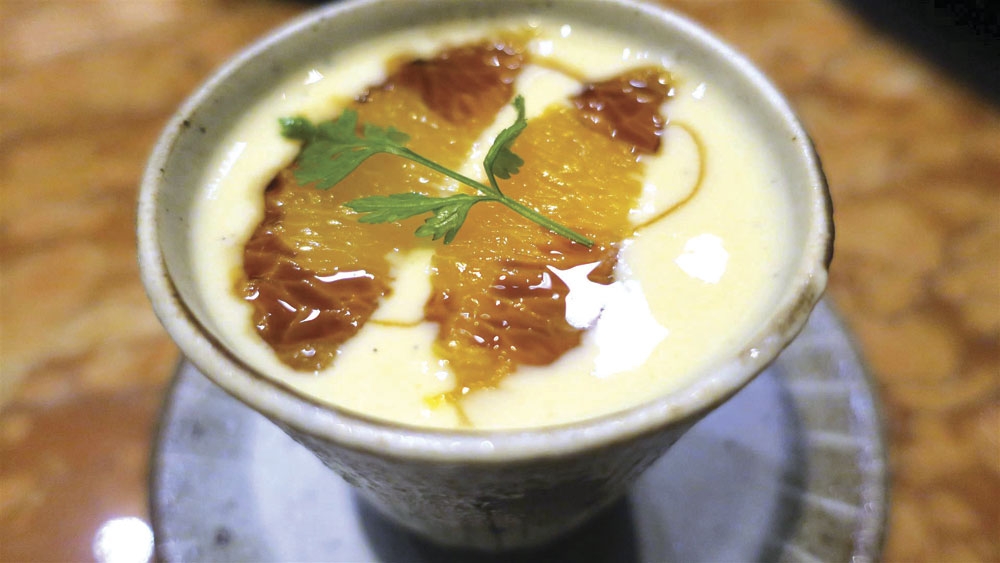 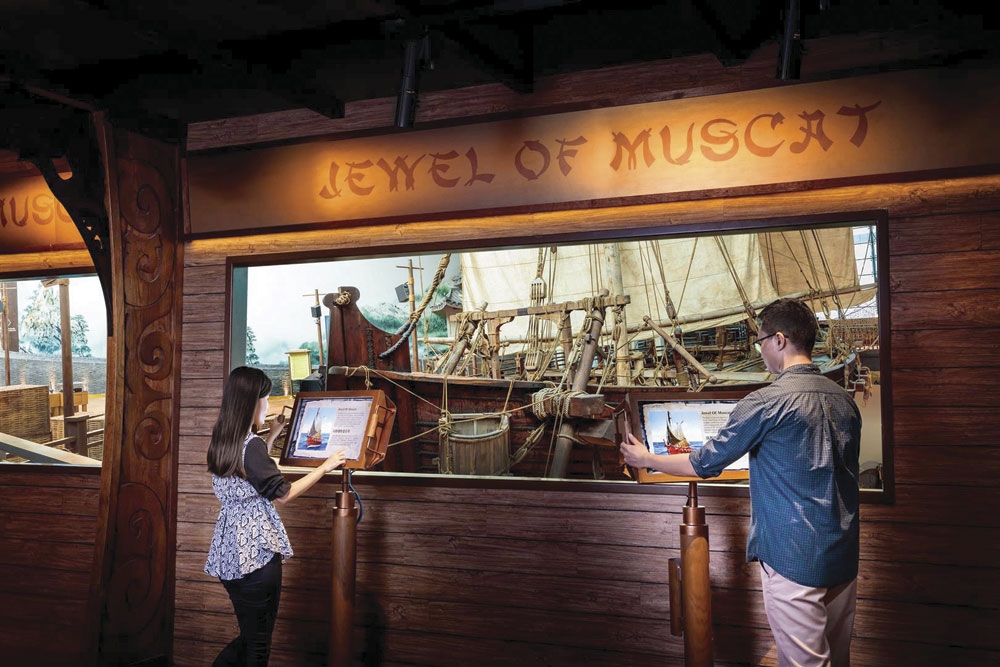 The Jewel of Muscat is 18 meters long and six meters wide, built the traditional way without nails and screws. (Contributed Foto) 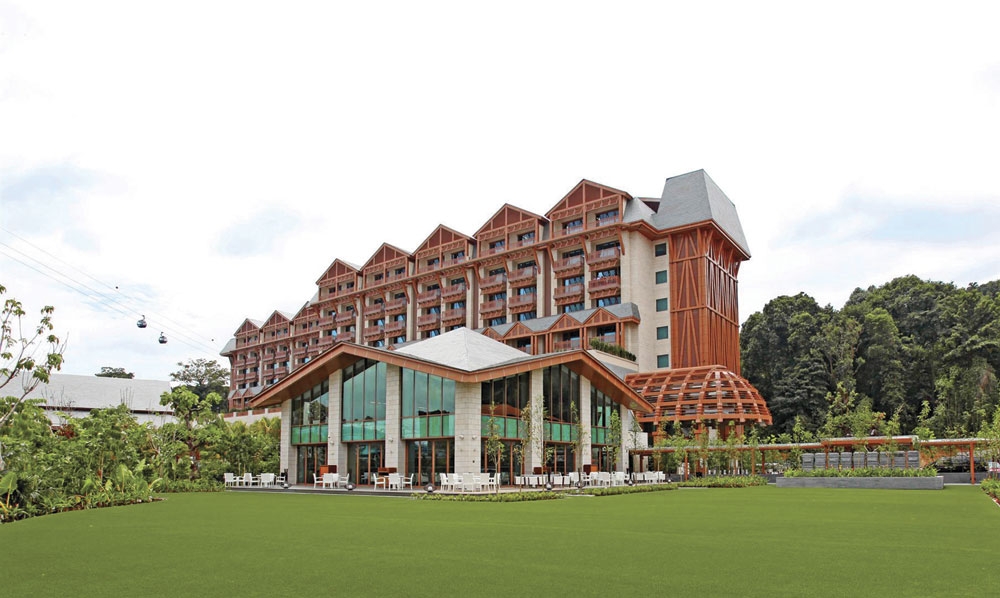 Equarius lives up to its claim of a tranquil resort stay. Rooms are big and facilities are well-maintained. They even provide a complimentary shuttle service to other hotels in Resorts World Sentosa. (Contributed Foto) 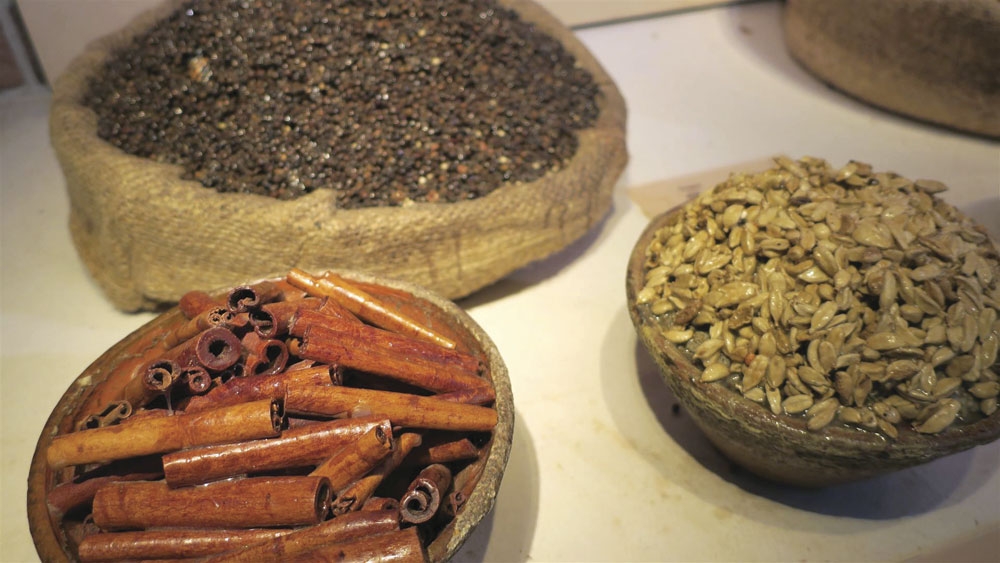 The flavours of the Maritime Silk Route, an exhibit that shows spices people bartered including cinnamon, cardamom, cassia and saffron. (Photo/Crystal Neri) 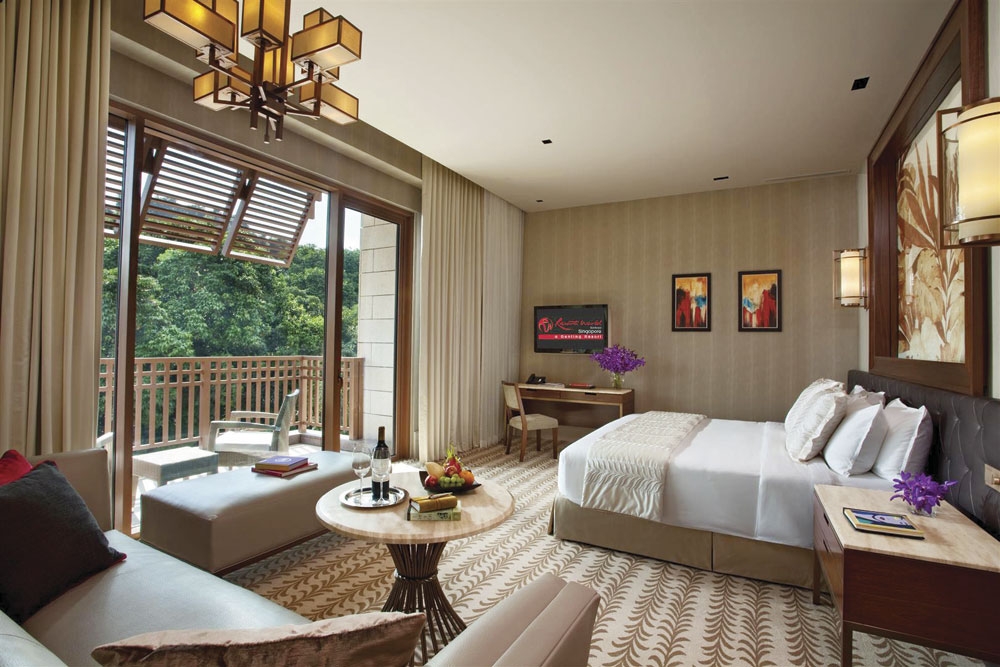 Designed with a tropical vibe in mind, the Equarius Hotel is spacious and perfect for those looking for a quiet stay at Resorts World Sentosa. (Contributed Foto) 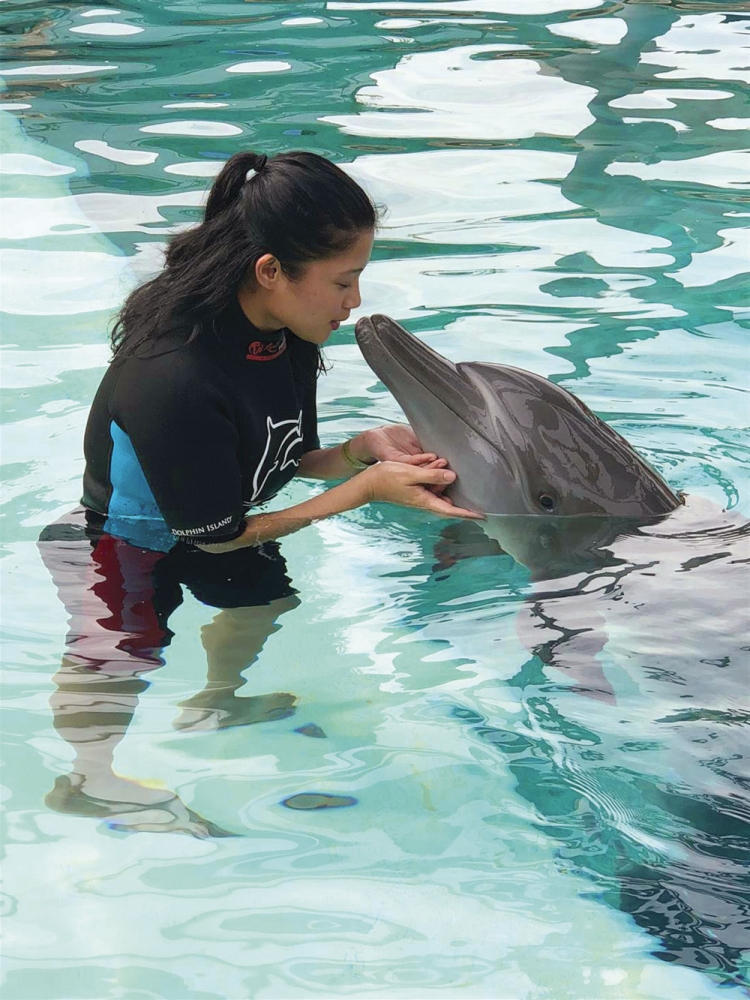 Kissing Sola the dolphin is one of the highlights of my trip to Resorts World Sentosa. I had a great time learning about these smart mammals from trainer Pei. (Photo/Crystal Neri) 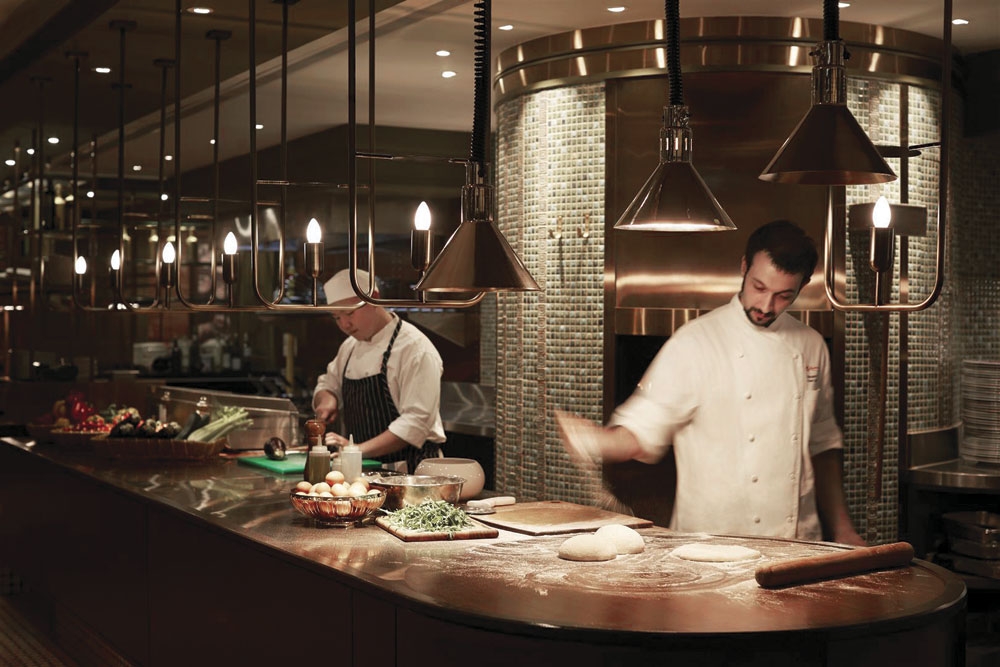 Fratelli means brothers in Italian, a reference to the chef brothers Enrico and Roberto Cerea of Michelin-starred Da Vittorio in Bergamo. (Contributed Foto) 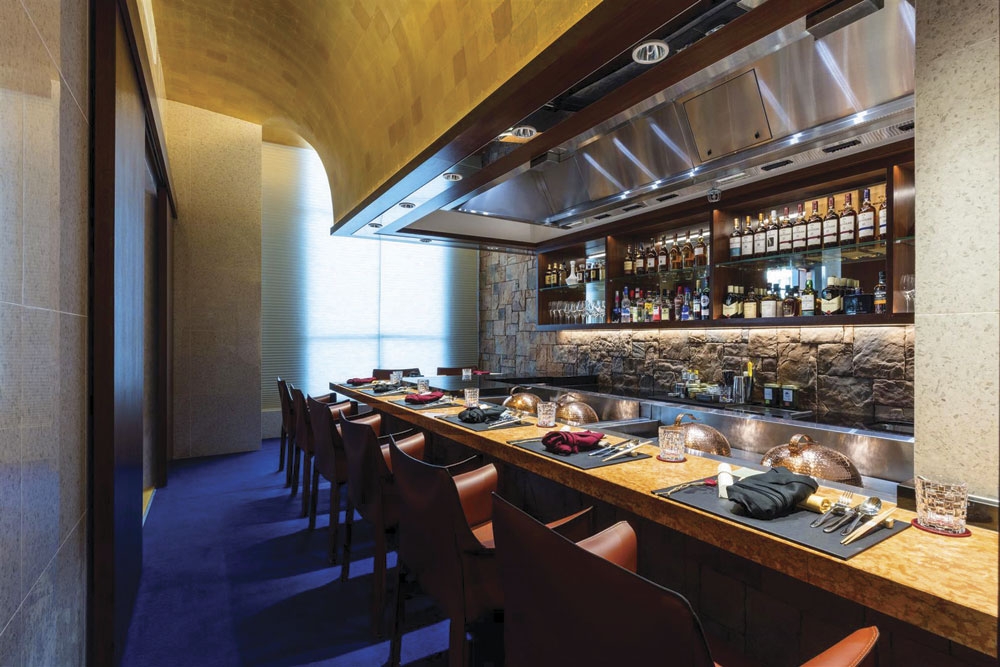 Teppan by Chef Yonemura promises an immersive dining experience where guests can interact with chefs as they cook right behind this teppan grill. (Contributed Foto)

KISS, hug and give rubdowns to a dolphin. Sip exotic tea while a sizzling slab of Miyazaki tenderloin wagyu beef cooks right in front of you. Sleep in a nature-inspired hotel with swoon-worthy views of a coast. All of these and more await at Singapore’s Resorts World Sentosa.

If you’re arriving for the first time–like me–then gear up to experience the resort’s offerings. If you’re returning after many trips, then brace yourself to find something new. Here are my favorite scenes at the renowned lifestyle destination.

A visit to the Maritime Experiential Museum enlightened me about the Maritime Silk Route. As Singapore’s first and only museum dedicated to the exploration of the historic era, the newly-revamped attraction has 15 stunning galleries that take visitors to the time when adventurers like Marco Polo, Ibn Battuta, Zheng He and Sang Nila Utama traded routes between Asia and the Middle East.

Some of the finest galleries include the Flavours of Maritime Silk Route, where I indulged in an olfactory experience wafting up saffron, cassia and mace. Another must-see is the Typhoon Theatre, where I had the experience of vibrating seats and water spritzers to mimic sinking on a Chinese ship. Then there’s the Jewel of Muscat, a grand gift from the Sultanate of Oman is a replica of a ninth-century Arabian Dhow. The name evoked images of jewelry for adornment but instead, it turned out to be a sailing vessel that went through an arduous five-month journey to get to the Lion City in 2010.

Famous for its otherworldly collection of marine life, S.E.A. Aquarium is one of Resorts World Sentosa’s premier attractions in Singapore and the region. The Shipwreck Habitat is known for having the world’s most successful shark ray breeding program. There, I learned how junk can thrive underwater, when invertebrates and fishes colonize a wreck to turn into a habitat. I couldn’t miss the photogenic Shark Seas, with its collection of over a hundred sharks swimming through an underwater tunnel. In the 120-foot wide aquarium Open Ocean Habitat, I got to peek inside one of the world’s largest windows to the ocean. I noticed people park strollers and backpacks to take a breather in this peaceful place, awestruck by sea bass, grouper and manta rays swimming in blue light.

I never dreamed that I could touch a dolphin, or even kiss one. But I got the chance in Dolphin Island, located inside Adventure Cove. My expert guide that day was friendly Pei, who let me interact with a seven-year-old mother dolphin. Sola would occasionally leave me to swim toward a smaller dolphin nearby, which I later learned was her daughter. Turns out, mother-calf bonding can last from three up to six years, explaining Sola’s attachment to her baby. With 20 Indo-Pacific bottlenose dolphins residing in 11 large interconnecting lagoons, guests at Dolphin Island can interact and learn facts about the charismatic dolphins like Sola and the rest of her pod.

With spacious accommodations and a bountiful breakfast buffet, it felt like I was crashing a Sunday wedding brunch. Equarius Hotel occupies a more secluded portion of the integrated resort, with sweeping views of the waterfront, the rainforest, and Mount Imbiah hills. Inside, you’ll also find Forest– a restaurant helmed by celebrity chef Sam Leong–which serves award-winning contemporary Chinese cuisine.

If you want to taste what a pioneer of French-Japanese cuisine can do with a hot plate grill, artisanal sakes, and air-flown ingredients from Japan, book yourself a seat at Teppan by Chef Yonemura. Known for his Michelin-starred namesake restaurant in Kyoto, Teppan is Chef Yonemura’s first restaurant outside of Japan. For dinner, I was accompanied by the resort’s senior communications executive, Jonathan Yu. We watched in rapt attention as the night’s assigned chef, Alpha, prepared a nine-course kaiseki dinner in front of us.

Our aperitif, vodka and yuzu liqueur with a slice of dried orange soaked in Bacardi, gave us a preview of the restaurant’s artistry and showmanship. “Please spray it three times,” the Pinay chef pointed to a small bottle of Angostura bitters. She then took a torch and flamed the shot to give it a toasty flavor. That was a stunning start to dinner concluded by a creamy and impossibly weightless soy milk pudding served with caramelized brown sugar from Okinawa. Oishii!

Fratelli is run by brothers Enrico and Roberto Cerea, owners of Michelin-starred Da Vittorio in Bergamo, Italy. My four-course dinner started with red prawns and tomatoes, rucola pesto, honey and mustard dressing, served by the restaurant’s assistant manager Shan. “This is our clam-scented potato cream,” he said, as I watched him carefully pour sauce over a plate of olive-oil poached Atlantic cod with lettuce and olives. To my delight as a chocoholic, Shan served me a plate of different flavored chocolates for my second dessert (after Il Nuovo cheesecake), which I happily knocked back with a glass of red wine.