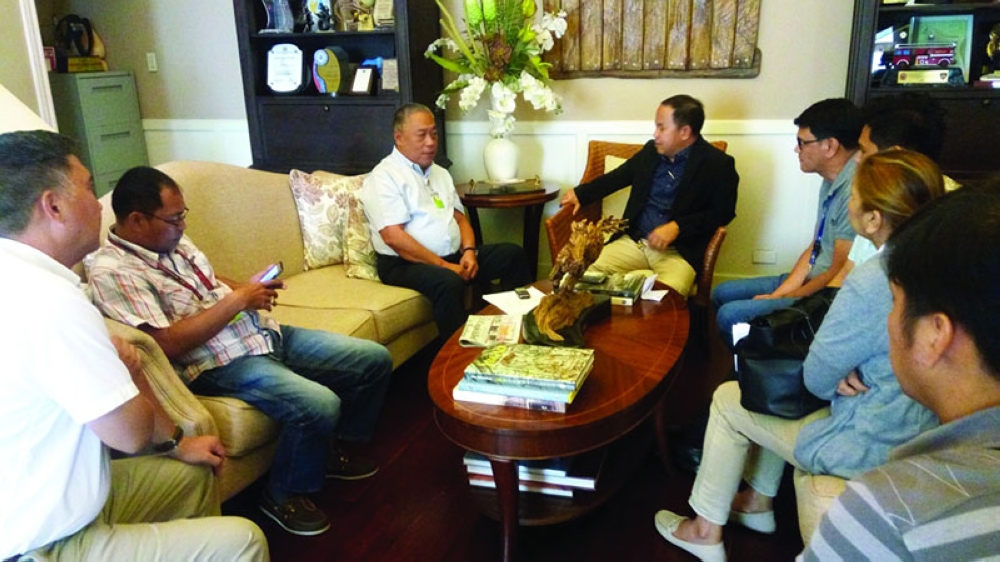 OPPOSITION. Officials of the National Historical Commission of the Philippines raised their concerns on the proposed 20-story building in the Capitol compound during a meeting with Governor Davide yesterday. (SunStar photo / Justin K. Vestil)

A GROUP of architects in Cebu urged Gov. Hilario Davide III to reconsider the Provincial Government’s plan to construct the 20-story Capitol Resource Building inside the Capitol compound.

In a statement, members of the United Architects of the Philippines (UAP) Cebu Lapu-Lapu Chapter said that constructing the Resource Center right beside the historic Capitol building is “ill-advised.”

The architects said the project should not push through as it will ruin the symmetrical and balanced arrangement of various sites in the area, including Osmeña Blvd., Fuente Osmeña circle and Capitol building.

It will also diminish the historical significance of the Capitol building, which, they warned, “will create a backlash among the silent majority.”

They noted that the Capitol building is “the most iconic structure in Cebu, which the Cebuanos dearly love and respect.”

Constructing the building also runs counter to various international treaties on heritage conservation and the preservation of historic sites that the country has signed, the group said.

“It is in this light that we respectfully request you to reconsider your decision. For us architects, it pains us to see our very own Capitol building and grounds desecrated and disturbed by such an ill-advised project,” they added.

The statements of UAP and other concerned heritage groups were raised during a meeting between Davide and officials of the National Historical Commission of the Philippines (NHCP) yesterday.

But despite the concerns of UAP and other heritage conservationists, Davide said the project will continue as planned.

Construction, though, has yet to start even after the approval of a P1.5-billion loan for it since the Province is still complying with other requirements.

Instead of building a 20-storey structure, the architects suggested using the old Palace of Justice building behind the Capitol for the expansion of their offices.

But Davide said this is not possible since the Palace of Justice building belongs to the Supreme Court.

During the meeting, NHCP Commissioner Dr. Rene Escalante informed Davide that they received numerous letters from local heritage groups concerning what a 20-story structure could do to the Capitol building’s historical value.

Davide said one of Escalante’s concerns is that the proposed building could topple over the old Capitol building in the event of an earthquake.

Escalante is also concerned that the new building would be an eyesore in the heritage buffer zone surrounding the Capitol building.

But Davide assured Escalante that due diligence was done before they decided to pursue the project.

He also said that the proposed building is already out of the Capitol’s heritage buffer zone.

Davide, a lawyer, said that based on the law, they cannot construct within five meters from a historical site or monument. (JKV)