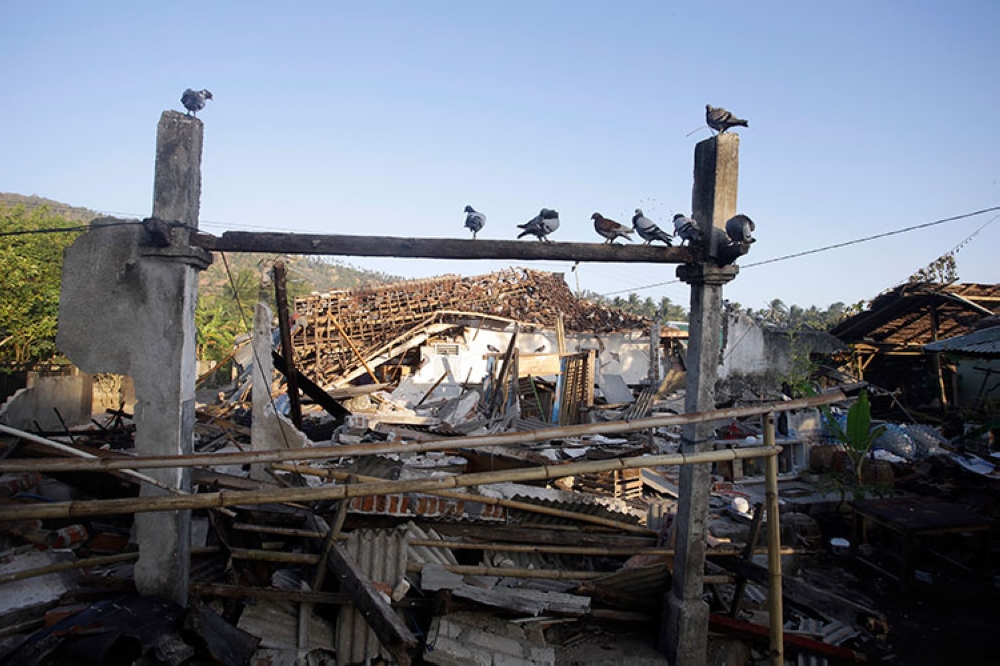 TANJUNG, Indonesia -- The Indonesian island of Lombok was shaken by a third big earthquake in little more than a week Thursday, August 9, as an official said the death toll from an earlier quake had topped 220.

The strong aftershock, measured at magnitude 5.9 by the US Geological Survey, caused panic and damage. It was centered in the northeast of the island and didn't have the potential to cause a tsunami, Indonesia's geological agency said.

Nyoman Sidekarya, chief of the provincial search and rescue agency that covers Lombok, told The Associated Press that the death toll from Sunday's (August 5) magnitude 7 quake is now 227.

Several agencies have been releasing higher death toll figures than the 131 announced on Wednesday by the National Disaster Mitigation Agency, which has a coordinating role in disaster relief. The agency said it is has not verified these other figures but expects the toll to climb.

Grieving relatives were burying their dead and medics tended to people whose broken limbs hadn't yet been treated in the days since Sunday's quake.

The Red Cross said it was focusing relief efforts on an estimated 20,000 people yet to get any assistance.

In Kopang Daya village in the hard-hit Tanjung district of north Lombok, a distraught family was burying their 13-year-old daughter who was struck by a collapsing wall and then trampled when the quake Sunday caused a stampede at her Islamic boarding school.

Villagers and relatives prayed outside a tent where the girl's body lay inside covered in a white cloth.

"She was praying when the earthquake happened," said her uncle Tarna, who gave a single name. "She was trying to get out, but she got hit by a wall and fell down. Children were running out from the building in panic and she was stepped on by her friends," he said.

Thousands of homes were damaged or destroyed in Sunday's quake and more than 150,000 people are homeless. The scale of the damage from the aftershock wasn't clear, but the two earlier quakes had left cracks in walls and roofs, making the weakened buildings susceptible to collapse.

The Indonesian Red Cross said it's focusing its relief efforts on an estimated 20,000 people in remote areas in the island's north where aid still has not reached.

Spokesman Arifin Hadi said people need clean water and tarpaulins most of all. He said the agency has sent 20 water trucks to five remote areas, including one village of about 1,200 households.

"People are always saying they need water and tarps," he said. He also said they're continuing to look for people with untreated injuries.

In Kopang Daya, injured villagers got their first proper treatment Thursday after medics arrived with a portable X-ray and other supplies.

They tended to an elderly woman with an injured face and hips who'd been knocked over by her grandson as they scrambled from their house.

Indonesia is prone to earthquakes because of its location on the "Ring of Fire," an arc of volcanoes and fault lines in the Pacific Basin. In December 2004, a massive magnitude 9.1 earthquake off Sumatra triggered a tsunami that killed 230,000 people in a dozen countries. (AP)