From social media to streets, calls made for review 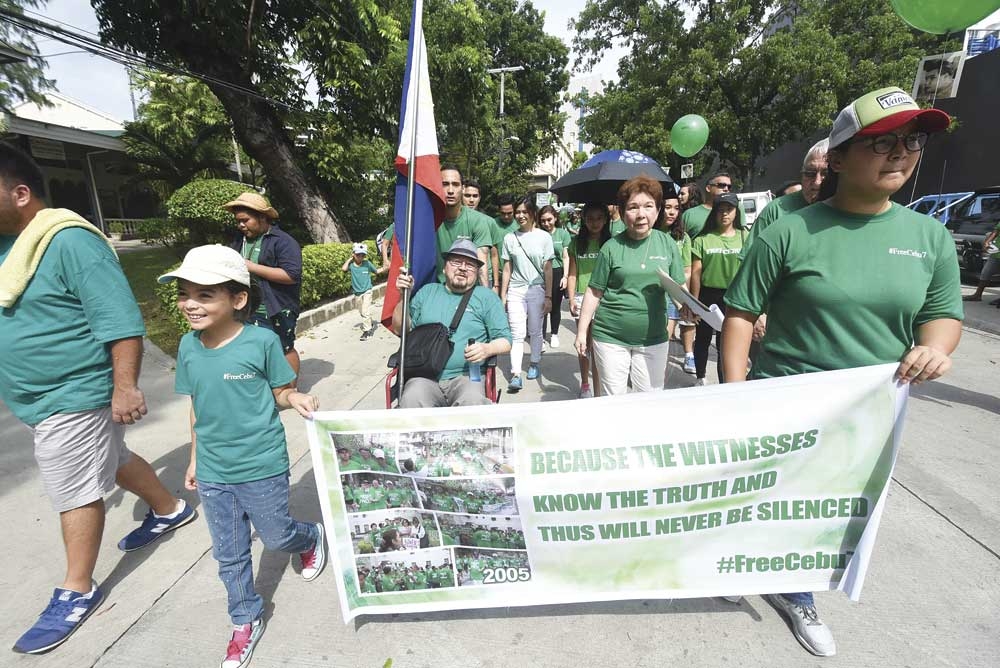 SPEAKING FOR THE SEVEN. Relatives and friends of Francisco “Paco” Larrañaga and 6 other men convicted in 1999 for the kidnapping and detention of the Chiong sisters begin a prayer-walk in Cebu City to seek a review of the case. (SunStar foto/Ruel Rosello)

SUPPORTERS and family members of the Chiong Seven, the seven men convicted of the kidnapping and serious illegal detention of Marijoy and Jacqueline Chiong, held a prayer-walk yesterday morning to appeal for their release.

Around 200 people walked from Casino Español to Fuente Osmeña, with the activist Fr. Robert Reyes at the forefront.

Before the activity, Fr. Reyes celebrated mass in the St. Pedro Calungsod Shrine within the Archbishop’s Residence compound at 7 a.m.

In his homily, Fr. Reyes urged supporters and family members of the Chiong Seven to continue to pray that the case will be reviewed.

He believes that the seven convicts were “fall guys.” Reyes said that the cause of the Chiong Seven was revived following the showing of the movie “Jacqueline Comes Home.”

The movie, directed by Ysabelle Peace Caparas and produced by her father, former National Artist Carlo J. Caparas, was meant to tell the story of the Chiong case, which involved not only kidnapping and detention, but also rape and homicide.

The movie premiered last month to disappointing reviews, but Reyes said it was like “manna” for those supporting the convicts’ cause.

“Thanks to the movie, it made the people angry. It made them seek the truth even more,” Reyes said.

In an interview, Reyes said he supported the Chiong Seven’s cause because they are examples of the justice system’s “cruel, unjust and inhumane treatment of the innocent.”

“Let the wounds open in order for the truth to come out,” Reyes added.

In a separate interview, Monalisa del Gallego-Jarque, one of the organizers of the event yesterday, said the prayer walk was meant to get the government to notice the plight of the Chiong Seven.

Jarque was one of 42 witnesses ready to testify for Larrañaga. The Larrañaga camp maintains that on July 16, 1997, Paco was with friends in Manila, while the Chiong sisters Marijoy and Jacqueline were kidnapped outside the Ayala Center Cebu.

Jarque said that she and two older sisters were with Larrañaga on that day. But when the trial took place, the defense’s witnesses were not enough time to testify. Regional Trial Court (RTC) Judge Martin Ocampo had kept some of them from taking the stand. He convicted them in 1999.

“Twenty-one years ago, when this happened, we said that this was a set-up. We were him that night. Even though no one listened to us at that time, we continue (to support Paco),” Jarque said.

Jarque said she and fellow Chiong Seven supporters are hopeful that President Duterte will grant executive clemency to Larranaga and his fellow convicts.

“We really ask that he should look into the case, as he is also a lawyer,” Jarque added. (JKV)