Duterte 'tired', ready to give up fight vs. drugs, graft 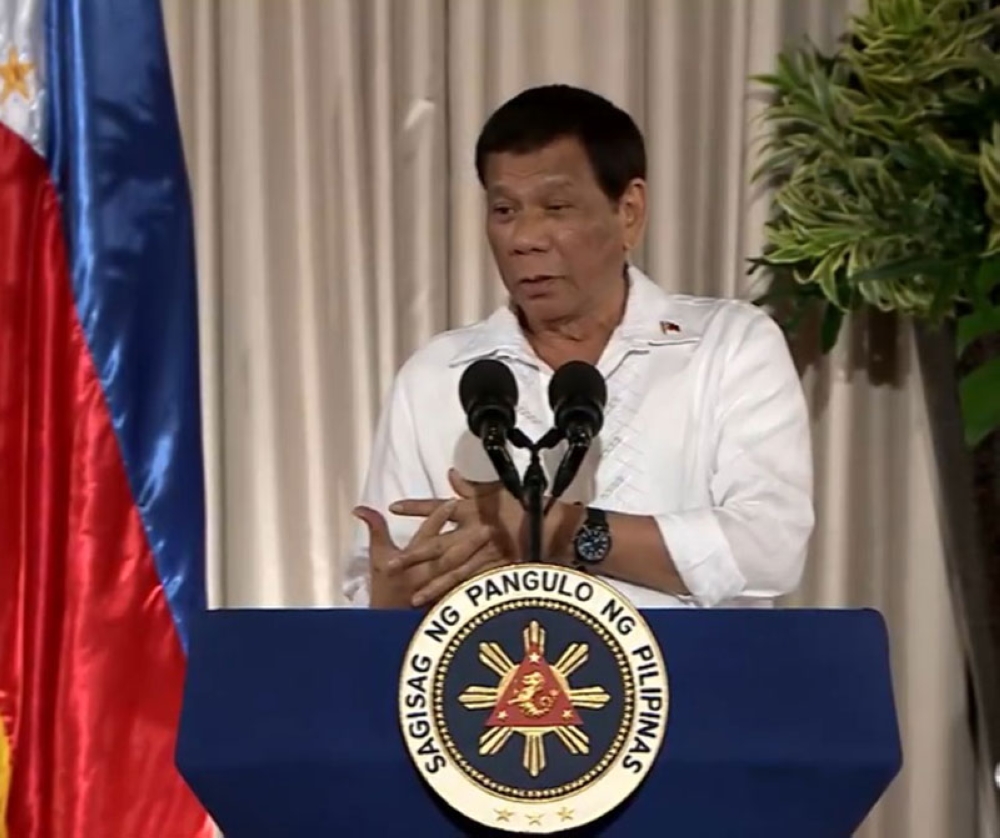 MANILA, President Rodrigo Duterte says he is tired and is ready to go home to Davao City, his hometown. In a speech on August 14, 2018, Duterte admitted he might not be able to fulfill his campaign promises to stamp out corruption and eradicate illegal drugs. (Photo from RTVM video)

VENTING his frustrations over a seemingly unceasing battle against corruption in government and illegal drugs, President Rodrigo Duterte on Tuesday, August 14, said he was already tired and has considered that he may not be able to fulfill his campaign promises.

"I am exasperated. I cannot do it. I have to admit to the people that I have failed and (you should) look for another one. Then i can go home to Davao," he told the business community gathered at the Malacañan Palace for the launch of the Pilipinas Angat Lahat program of Go Negosyo.

The President admitted that he may not be able to fulfill his campaign promises to stamp out corruption and wipe out illegal drugs.

"I do not think I can fulfill my promise to the Filipino people," he said.

On his war on drugs, the President noted that illegal drug shipments intercepted by authorities are getting bigger.

"What used to be millions (of pesos), it's now billions and even government agencies are now quarreling because they want to do something," he said.

Read: Duterte: No drugs in magnetic lifters in Cavite

He said he believed he would not succeed in eradicating corruption and illegal drugs during his term. The President is allowed only a single six-year term under the 1987 Constitution. Duterte is into his third year in office.

"I'm tired. Drugs will not end at the end of my term. It will just worsen," he repeated.

Duterte recalled telling the military and the police officials during the August 7 joint command conference about his plan to cut short his six-year term.

"Ang sinabi ko sa mga sundalo at pulis, 'Guys, I want you to know that I am thinking of stepping down because I’m tired,'" Duterte recounted.

(What I told the police was, "Guys, I want you to know that I am thinking of stepping down because I’m tired.")

"While I am not against or angry against anybody, my chase against graft and corruption seems to be endless and it has contaminated almost all government departments and offices," he added.

Duterte has been trying to fulfill his campaign promise to clean the government, as he has already dismissed more than 20 alleged corrupt officials since he came to power in June 2016.

Just last week, the President fired the entire Nayong Pilipino Foundation board over the controversial 70-year lease contract with Chinese casino investor Landing Resorts Philippines Development Corp., which was found to be "grossly disadvantageous" to the government.

On Monday, August 13, Malacañang also announced Duterte's decision to sack two high-ranking military officers and about 20 other officers over the alleged procurement anomalies at the Armed Forces of the Philippines (AFP) Medical Center in Quezon City.

Despite his firing spree, the President was saddened that many government officials continue to be engaged in irregularities.

Duterte admitted that he found it difficult to stop corruption, stressing that it was "very exhausting" to chase public officials who continue to ignore his order against graft and corruption.

"Graft is so embedded, it is endemic and it is always a part of the territory of a transaction, especially by government," the President said. (Ruth Abbey Gita/SunStar Philippines)