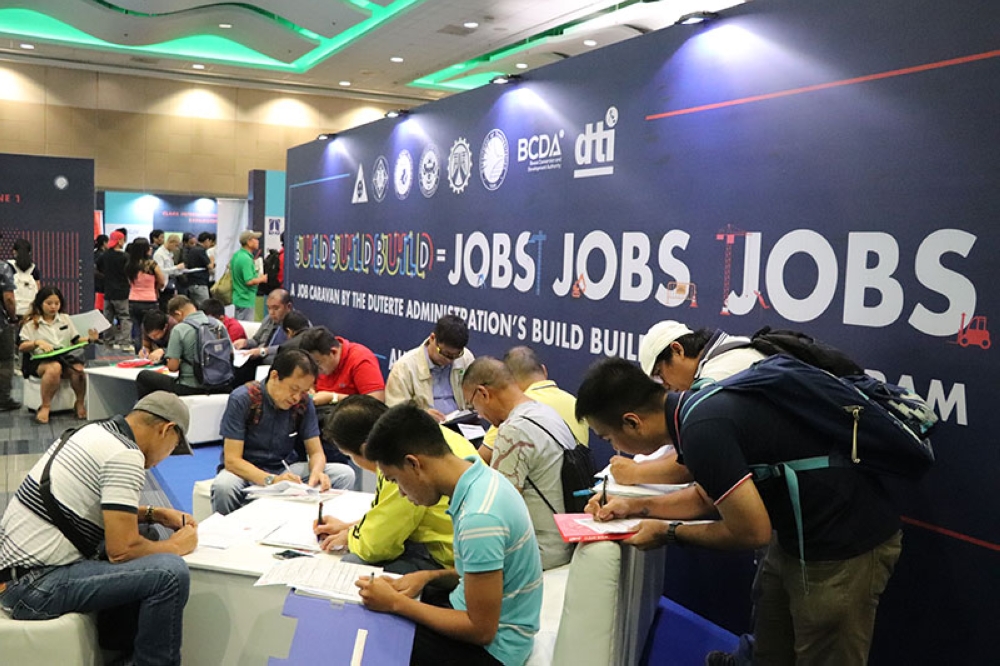 According to Villar, the Jobs Jobs Jobs Caravan is “the largest event of its kind this year with almost 17,000 job openings from contractors of the Build Build Build Program of the administration.”

“We are proud to offer thousands of jobs to willing and able Filipinos who are ready to contribute in the realization of the biggest, boldest and most ambitious infrastructure program of the Philippine government,” added Villar.

Bello said that more programs would be pursued by the government to provide job opportunities.

“We all intend to fulfill our mandate to help generate employment and provide decent jobs for the Filipino workers. This is just the first of many endeavors,” Bello stated.

Tugade said that over 40 employers were at the caravan accepting resumes and application papers, conducting interviews, and hiring on-the-spot for vacant positions for engineers, architects, carpenters, welders, and other construction-related skills. Construction companies were also hiring support staff in the fields of accounting, finance, IT, and customer service, among others.

“The job generation component of these projects does not stop at construction. After a project has been completed, we will need people to operate and maintain these facilities. Tuluy-tuloy po ‘yan at dahil sa mga infrastructure projects na ito, maraming negosyo ang itatayo na mangangailangan din ng mga empleyado, at magpapasigla sa ating ekonomiya,” Tugade said.

Dominguez said, “The ‘Build, Build, Build’ initiative underpins President Duterte’s vision to propel the Philippines into an upper middle – income economy by 2022 by closing the infrastructure gap that has for decades dulled our global competitiveness and at the same time create a lot more jobs to improve living standards and free Filipinos from poverty.”

“The Duterte administration is pursuing a Comprehensive Tax Reform Program (CTRP) to modernize Philippine taxation and further sharpen the country’s competitiveness while putting in place a steady revenue stream to fund ‘Build, Build, Build’ along with socioeconomic programs to reduce poverty to 14 percent over the medium term,” Dominguez noted.

Secretary Diokno said that “We plan to accelerate infrastructure spending from 5.4 percent of Gross Domestic Product (GDP) in 2017 to 7.3 percent in 2022 in order to address the dismal state of our infrastructure. Accordingly, we have committed to spend eight to nine trillion pesos for the Build Build Build Program until 2022.”

“In line with this administration’s goal of inclusive development, we are proud to offer millions of direct and indirect jobs to complement our “Build Build Build” efforts. Indeed, this Golden Age of Infrastructure will not only build better road networks, airports, and bridges, but it will also build better lives for Filipinos now and in the future”, added Diokno.

According to Dizon, the Jobs Jobs Jobs Caravan right at the capital region is just the first of many from the Build Build Build Program as the current administration stretches its infrastructure investment across the archipelago.

“The President’s support in infrastructure development all over the country remains intact hence the public can expect that the Build Build Build Program will open up opportunities for people outside Metro Manila in the coming years,” added Dizon.