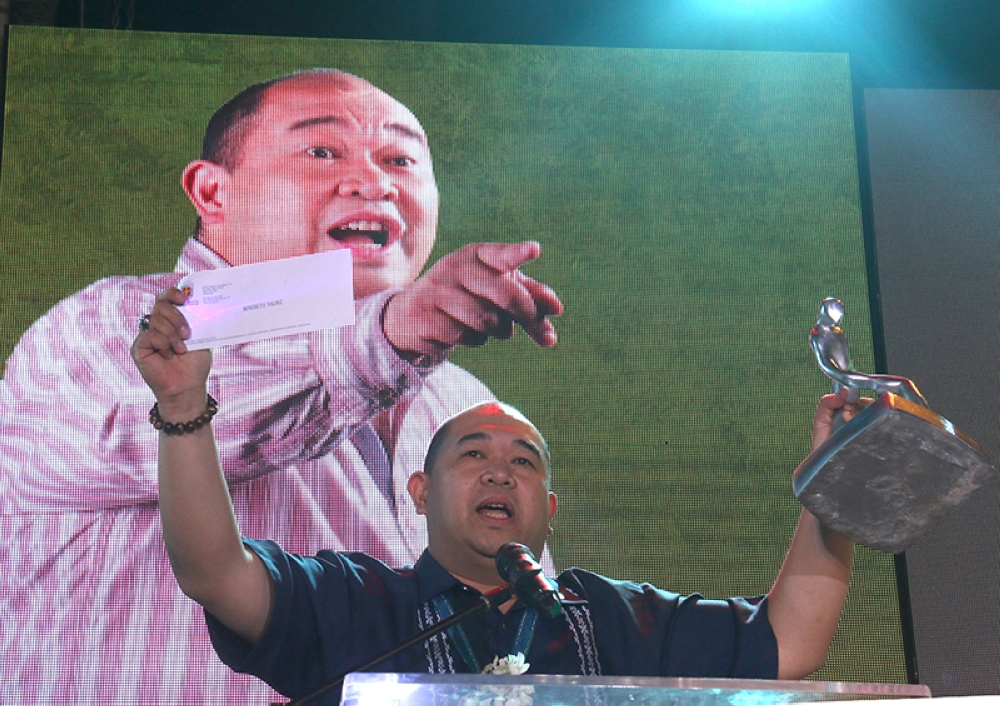 Recognized. Dr. Benedict Valdez raises his trophy after receiving the Ramon Aboitiz Award (RAFI) for Exemplary Individual during the 7th Rafi Triennial Awards. A surgeon and president of the Maharlika Charity Foundation Inc., Valdez has helped bring back the smile of more than 1,000 cleft lip and palate patients. (SunStar Foto / Alex Badayos)

EFFORTS of individuals and institutions who committed themselves to bring change and improve the society were recognized during the awarding of the Ramon Aboitiz Foundation Inc. (Rafi) Triennial Awards yesterday at Bai Hotel in Mandaue City.

Rafi gave the Eduardo Aboitiz Award for Outstanding Institution to the Philippine Eagle Foundation (PEF). The category has five nominees.

The Ramon Aboitiz Award for Exemplary Individual, on the other hand, was given to Dr. Benedict Edward Valdez. The category also have five nominees.

With the goal to protect the Philippine eagle, which is considered an endangered species, PEF created a home for the eagles in Davao del Sur.

Founded in 1987, PEF has been doing efforts to save the critically endangered creatures that have only 400 pairs remaining in the wild as tagged by the International Union for Conservation of Nature.

PEF has its own Philippine Eagle Center where eagles are propagated. It is also a place where PEF educates the tourists and guests about the country’s forest ecosystem.

PEF is also protecting some 8.4-hectare of trees in Davao that serves as home of the eagles, monkeys, and other wildlife.

Aside from their efforts to increase the number of eagles, PEF is also working with indigenous people communities whom they considered as forest guards.

Ibañez said PEF will continue to protect the eagles’ welfare and will use the money they received from Rafi to expand their engagement program and develop a training standard.

As for Dr. Valdez, he immersed himself in surgical missions to heal patients with cleft lip and palate.

Valdez started his advocacy when he joined Maharlika Charity Foundation Inc., a non-government organization where he later became the director.

Aside from providing free cleft lip and palate operations, Valdez also trains and helps Davao’s 911 Emergency Medical System (EMS) members and nurses as his way of passing his passion to the next generation.

During his speech yesterday, Valdez shared his plan to build an institutionalized free hospital care that can help address the health issues in the Philippines.

“I want to embody to the people that charity still exist,” he said.

Evelyn Nacario-Castro, Rafi’s vice president for governance and linkages, said she hopes that the award given to the awardees will fuel them to further help the society.

The finalists in the outstanding institution category were the Community-Based Health Program Diocese of Ipil; Negrense Volunteers for Change Inc.; Participatory Research, Organization of Communities and Education towards Struggle for Self-Reliance (PROCESS) Bohol Inc.; and Tuburan for Rural Women Empowerment and Development Inc.

The finalists in the exemplary individual category were Dr. Roel Cagape from Saranggani; Sarah Cubar, who is a teacher from Kapalong, Davao del Norte; Norlan Pagal from San Remegio, Cebu; and Mateo Quilas, the sightless visionary from Bohol.